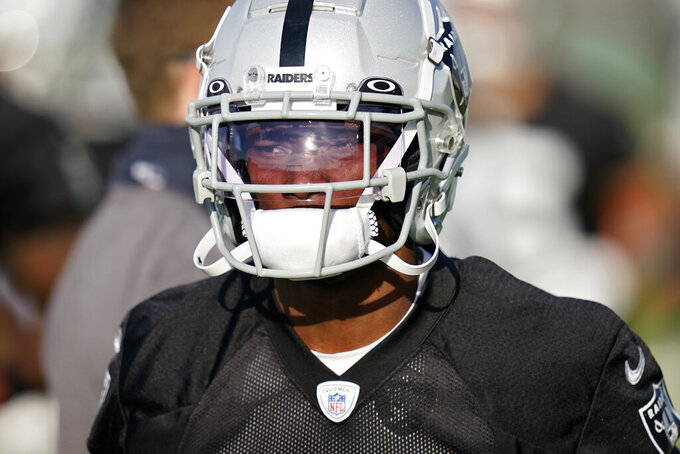 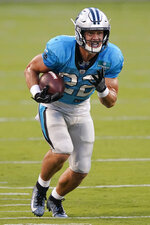 CHARLOTTE, N.C. (AP) — Raiders general manager Mike Mayock has no idea what to expect from the Carolina Panthers on Sunday.

Nor does his coaching staff.

The Panthers have a new head coach and two new coordinators — all coming from the college level — and a new quarterback. With no preseason games, the Raiders staff doesn’t have game tape to watch, no tendencies to focus on and thus no clear picture on how to game plan for Carolina.

“You start to try to meld all of that together to guess what you might be seeing. That’s a difficult challenge,” Mayock said. "It’s a huge challenge for any team Week 1, but when you’re talking about a college coach coming in, some pro coaches, other college coaches, new personnel, I think our coaching staff has one of the toughest challenges in Week 1.”

The Panthers hired Matt Rhule away from Baylor as head coach, and he brought defensive coordinator Phil Snow — and several other Bears assistants — along with him to Carolina as part of a rebuilding project. On offense, the Panthers hired coveted coordinator Joe Brady, who helped LSU to a national championship last season.

Raiders coach Jon Gruden said his staff has spent time watching past game film of the Baylor Bears and LSU Tigers, but adds it's still going to be a challenge.

“No preseason, no history gives you very little chance to do the standard preparation — but we have to adapt," Gruden said.

Panthers' 1,000-yard receiver D.J. Moore said the element of surprise may be an advantage for Carolina early in the season.

“Nobody knows what we are going to come out and do — and that’s the scary thing for an opposing team," Moore said.

But Gruden added: “But we've added players of our own that they haven't seen either.”

One thing the Raiders can expect is a full dose of Christian McCaffrey, the most used running back in the league over the past three seasons.

Carolina's All-Pro running back became the third player in NFL history to surpass 1,000 yards rushing and receiving in the same season in 2019 and established himself as one of the most dynamic players in the league.

“They're going to get the ball to him any way they can,” Gruden said.

Teddy Bridgewater finally has a permanent starting job again in the NFL four years after a devastating knee injury, replacing Cam Newton in Carolina. He has some solid playmakers to work with including McCaffrey, who caught a franchise-record 116 passes last season, Moore, and speedsters Curtis Samuel and ex-Jet Robby Anderson. Carolina's offense should resemble that of the Saints, with Bridgewater looking to get the ball out quickly to his playmakers thus nullifying the opponent's pass rush.

Brady coached Bridgewater in New Orleans in 2018, but he is sure to add a few wrinkles from his time at LSU. McCaffrey said it was fun to watch what Brady did at LSU and he's “extremely excited” to see how he calls plays in Carolina.

Derek Carr is set to start his seventh straight season opener at quarterback for the Raiders, the longest streak in franchise history. Carr is coming off a season when he set career highs in completion rate (70.4%), yards (4,054), yards per attempt (7.9), and passer rating (100.8). But the Raiders scored fewer than 20 points per game for the third straight year, joining Buffalo and Miami as the only teams to do that. "I have a lot to prove to myself. I have a lot to prove to my organization,” Carr said. “I am going to be completely honest with you, I’m tired of being disrespected.”

The Raiders are set to start a pair of rookie receivers for the first time since 2009. With Tyrell Williams out for the season with a shoulder injury, third-rounder Bryan Edwards joins first-rounder Henry Ruggs III in the projected starting lineup. The only other time the Raiders started two rookie receivers in the opener was in 2009 when Darrius Heyward-Bey and Louis Murphy did it. The only other rookie receivers to start the opener for the Raiders since the merger are Cliff Branch (1972), Jessie Hester (1985), Rod Streater (2012) and Amari Cooper (2015).

The Raiders have five new projected starters on a defense that has struggled at all levels since Paul Guenther took over as coordinator in 2018. The Raiders rank 31st in points per game allowed (28.7) and last in yards per play allowed (6.21) in that span. Maliek Collins was signed to bolster the inside rush, first-round cornerback Damon Arnette steps in as a starter and Johnathan Abram is back at strong safety after a season-ending injury in last year’s opener. The biggest changes came at linebacker where Cory Littleton and Nick Kwiatkoski were brought in to help improve the coverage against running backs and tight ends. “It looks like day and night, truthfully,” Abram said. “We’ve gotten faster on every single position on offense and defense. But the linebacker core does stick out.”

The Panthers allowed a league-high 5.2 yards per carry last season and an eye-popping 32 touchdowns on the ground. That prompted the Panthers to part ways with defensive tackles Gerald McCoy, Dontari Poe and Vernon Butler and pass rush specialist Mario Addison. They also spent all seven draft picks on defensive players. Carolina gets two-time defensive tackle Kawann Short back from a shoulder injury in 2019 and will pair him with rookie first-round draft pick Derrick Brown inside. Promising second-year player Brian Burns has big-time potential and will join free agent pickup Stephen Weatherly as the starting defensive ends.

There will be no fans at the game because of the coronavirus.