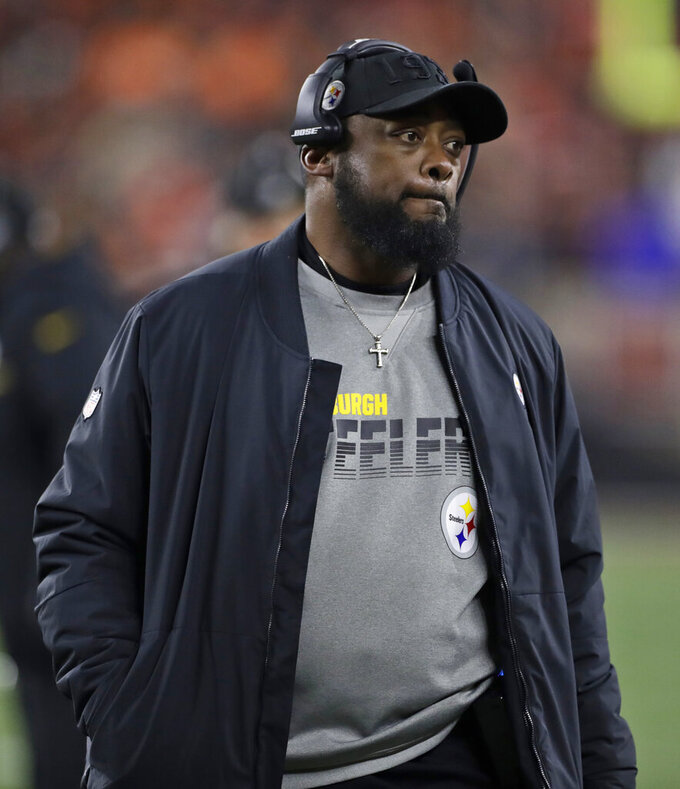 CINCINNATI (AP) — Andy Dalton could barely protect himself as the Steelers poured through the line, sacking him eight times at Heinz Field in September — one of the quarterback’s worst moments in a nine-year career.

The winless Bengals will see how their fourth-round pick fares against the Steelers’ hard-charging defense Sunday at Paul Brown Stadium, where thousands of Pittsburgh fans are expected to make it a challenging atmosphere for the home team. The psychological bruises from that 27-3 drubbing on a Monday night two months ago are still fresh.

“As the game went, we were throwing the ball a lot and they were just teeing off,” first-year coach Zac Taylor said. “It turned into a bit of a horror show there and we’ve got to learn from that.”

Both Ohio River rivals are trying to get beyond a little horror.

The Steelers (5-5) lost Ben Roethlisberger in the season opener and dropped four of their first five, but stabilized behind fill-in Mason Rudolph and a defense that’s been among the league’s best at getting the ball. The momentum was broken last week in Cleveland with a costly 21-7 loss.

Top receiver JuJu Smith-Schuster sustained a concussion and a knee injury. Running back James Connor aggravated an injured shoulder. Rudolph had his helmet ripped off by Cleveland’s Myles Garrett, who then clubbed the quarterback with it, drawing an indefinite suspension. Steelers center Maurkice Pouncey punched and kicked Garrett and got a three-game suspension that was later reduced to two games after an appeal.

It’s quite a challenge for a team that can’t afford to lose this one if it wants to make a playoff run.

“We can’t let off the gas pedal at all,” linebacker T.J. Watt said. “We’re learning that this year.”

They’re heading to a place where they’ve had many season-saving moments. And things have never been more miserable at this side of the river.

At 0-10, the Bengals have matched the worst start in their history and the longest losing streak overall — only the third to drop 10 in a row. In the bigger picture, they’ve lost 12 straight from last season, a club record.

They’re starting a rookie quarterback who has completed only 47.5 percent of his throws and could find himself back on the bench with another bad showing.

“It’s a new week to reinvent ourselves,” Finley said.

No matter how much it’s struggling, Pittsburgh usually get things straightened out against the Bengals. In addition to nine straight wins in the series, the Steelers have taken 12 of 13 and 17 of 20. They’ve won six in a row at Paul Brown Stadium, including an 18-16 victory in a first-round playoff game in the 2015 season when Vontaze Burfict’s hit to Antonio Brown’s head set up the winning field goal. Steelers coach Mike Tomlin is 20-5 all-time against Cincinnati.

The Steelers have one of the NFL’s most experienced offensive lines and have done an excellent job of keeping whoever is at quarterback upright. Pittsburgh has allowed 15 sacks on the season, the second-fewest in the league. The line, however, has struggled to generate much push in the running game. The Steelers are 28th in yards rushing and have had trouble all season converting short-yardage situations. The running game could get some reinforcement if rookie Benny Snell Jr. returns after missing three games because of a knee injury.

“There is a certain meat-on-meat or bone-on-bone element of football that you can’t run away from and short yardage is one of them,” Tomlin said.

The Bengals benched Dalton after an 0-8 start so they could see whether Finley fits in their long-term plans. Taylor has left the door open for a return to Dalton if the rookie continues to struggle. The fourth-round pick is having a tough time in an offense with an undependable line and a group of receivers that lacks a deep threat with A.J. Green and John Ross injured. The Bengals have centered the offense on running back Joe Mixon the past two games, but the passing game has been ineffective all-around.

Sometimes in the passing game when we've missed, we haven't been right on a route, we haven’t been great in the protection part, or the throw hasn’t been good,” offensive coordinator Brian Callahan said. “So there’s all these different things where we're just off there. We're kind of going round and round.”

The Bengals will have a different left side of their offensive line for the rematch. Cordy Glenn is expected back at left tackle after missing 10 games with a concussion and team-imposed suspension. Billy Price has started at left guard for the past five games, replacing rookie Michael Jordan.