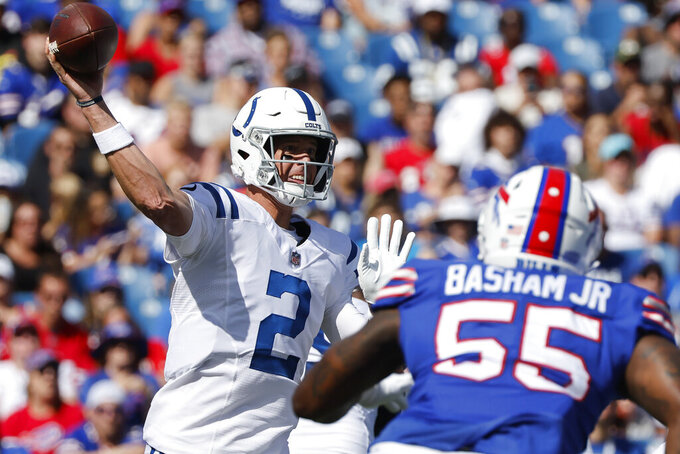 ORCHARD PARK, N.Y. (AP) — Matt Ryan can finally put the Falcons behind him.

Whether it was seeing his name on the back of a No. 2 Colts jersey hanging in his locker, or completing his first attempt — a 6-yarder to tight end Kylen Granson — the 37-year-old quarterback feels as if his transition to Indianapolis is complete.

“I’m part of this team and there’s 30, 40 other guys that it was their first time playing with the Colts today,” Ryan said following a 27-24 preseason-opening loss to the Buffalo Bills on Saturday. “We all got it under under our belt for the first time. And I think all of us, that entire group of new guys here is going to feel a lot better heading into next week.”

The Colts can begin feeling more comfortable following Ryan’s debut, which reflected many of his pass attempts: relatively short and efficient.

With Von Miller and the rest of the Bills starting defense sitting out, Ryan finished 6 of 10 for 58 yards, with two of his incompletions coming on fourth down. More importantly, the 15-year veteran didn’t commit a turnover while showing a nimbleness in the pocket by avoiding a defender to hit Michael Pittman in stride on a crossing route for a 17-yard completion.

Tyler Bass made a 46-yard field goal as time expired as Buffalo scored on three consecutive possessions in the final 8:10 to rally from a 14-point deficit. Matt Barkley oversaw the comeback in finishing 18 of 24 for 224 yards, with Raheem Blackshear rushing for touchdowns of 1 and 3 yards over a span of 4:19 to tie the game.

Buffalo won its ninth straight preseason outing, which ranks as the NFL’s second-longest active streak behind the Baltimore Ravens who have won a league-record 21 in a row.

Coach Sean McDermott took the good — the come-from-behind win — with the bad in an outing Buffalo committed five turnovers, including four in the first half.

"It was good to see us come together a little bit as a team and play better complementary football in the second half,” McDermott said. “Obviously, the turnovers and penalties in the first half can’t happen.”

With Buffalo also resting Josh Allen and its starting offense, the struggles fell on backup Case Keenum, who threw two interceptions and lost a fumble.

Keenum’s performance was a disappointment for a player the Bills are counting on to be Allen’s backup after acquiring the 10-year veteran in a trade with Cleveland. He finished 11 of 18 for 86 yards with his second interception coming one play after Bills safety Jaquan Johnson picked off Foles to give Buffalo the ball at the Colts 15.

“To go out and do that, that was uncharacteristic of me. I take full responsibility for all of those,” Keenum said. “Any time we don’t score a touchdown when we have the ball in our hands, it makes me mad. So there’s a lot of stuff I need to get better at.

Under Keenum, the Bills managed just 119 net yards offense and five first downs in the first half, with Buffalo's only score coming on rookie linebacker Terrel Bernard returning Nick Foles' fumble 69 yards for a touchdown.

Foles, who also threw an interception, finished 7 of 11 for 72 yards, including a 15-yard touchdown pass to an uncovered running back Ty’Son Williams.

Sam Ehlinger, the Colts’ sixth-round pick out of Texas last year, finished 10 of 11 for 88 yards with touchdown passes to tight ends Jelani Woods and Michael Jacobson.

Ryan is set to become the Colts’ fourth different opening day starter in as many years since Andrew Luck retired. He takes over after Indianapolis parted ways with Carson Wentz, who took the blame for the Colts squandering their playoff chances by losing their final two games, including a 26-11 season-ending dud at Jacksonville.

Reich provided Ryan the preseason start in part to provide the starter an extra chance to ramp up for the season-opener at Houston on Sept. 11. Reich is also mindful of how the Colts got off to a slow start in opening last season 1-4 under Wentz.

Bills first-round draft pick, CB Kaiir Elam, got the better of Colts second-round draft pick, WR Alec Pierce, in forcing Indianapolis to go three-and-out on its opening possession. Elam stayed tight to Pierce on a slant route and got his hand on Ryan’s attempt on third-and-3 at the Colts 12.

Colts: CB Isaiah Rodgers who had an interception and recovered a fumble, did not return after sustaining a head injury in the first half. ... WR Keke Coutee did not return due to a groin injury.

Bills: Elam returned after being evaluated for a head injury late in the second quarter.