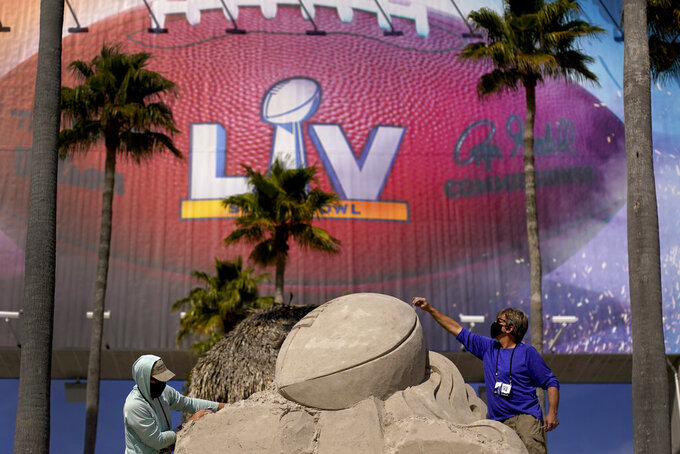 FILE - In this Feb. 4, 2021, file photo, workers sculpt the Lombardi Trophy out of sand outside of Raymond James Stadium ahead of Super Bowl 55 in Tampa, Fla. The city is hosting Sunday's Super Bowl football game between the Tampa Bay Buccaneers and the Kansas City Chiefs. (AP Photo/Charlie Riedel, File)

ORLANDO, Fla. (AP) — Disney's Super Bowl parade has been nixed, but the filming of the “I'm Going to Disney World" commercial after the big game is still on.

Officials at Walt Disney World said Friday that the theme park resort wouldn't be hosting its annual Super Bowl parade this year featuring the game's star players because of the coronavirus pandemic. But the resort still plans to film its annual ad after the game, usually featuring the Most Valuable Player looking at the camera and saying those famous words.

The ads have featured Super Bowl stars since 1987 when Phil Simms of the New York Giants first appeared following his team's championship win.

In the ads, the song “When You Wish Upon a Star" plays over shots of the featured player passing or running and scenes of fans screaming and jumping. At the end, an off-camera announcer acknowledges the Super Bowl win and asks the player, “What are you going to do next?"

“Be sure to stay tuned after the big game to catch the commercial on major TV networks and social media!" Disney officials said in a blog post. “Disney Parks hopes to be able to bring back our other Super Bowl traditions next year, including letting football and Disney fans see and cheer on their favorite player in the park."

Disney World has not had parades since it reopened last summer following a closure due to the spread of the virus.