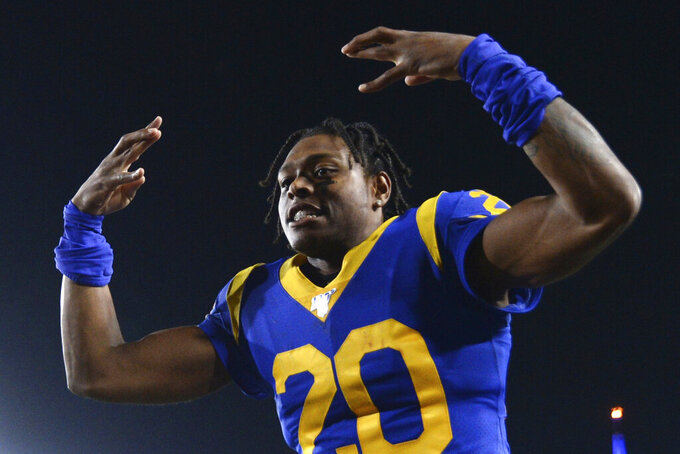 FILE - In this Nov. 17, 2019, file photo, Los Angeles Rams cornerback Jalen Ramsey celebrates the team's win over the Chicago Bears in an NFL football game in Los Angeles. Ramsey says he won’t hold out as he heads into the final year of his rookie contract and his first full season with the Rams. After a tumultuous tenure in Jacksonville, the star cornerback sounds content in Los Angeles and eager to play new roles on defense. (AP Photo/Kyusung Gong, File)

LOS ANGELES (AP) — Jalen Ramsey says he will definitely report to training camp with the Los Angeles Rams for the final year of his rookie contract.

And while he didn't confirm how he'll get there, Ramsey probably won't feel the need to show up in an armored bank truck this time.

The Rams have said they realize Ramsey deserves to be one of the NFL's highest-paid cornerbacks ever since they acquired him from Jacksonville last season.

In turn, Ramsey has done everything possible to be worthy of a megadeal, receiving his third Pro Bowl nod last fall before earning his coaches' trust and praise during the current offseason.

It all adds up to strong optimism on both sides while Ramsey's representatives work on his long-term deal with the Rams.

“It will get handled,” Ramsey said Tuesday in a video conference call.

“The Rams know where I stand, and that’s all that matters,” he added. "They've been in contact with my agent. They're on the same page. They know what’s up. I know what’s up. ... Everybody knew what type of situation it was going to be once they traded for me. I think it doesn’t need to be talked about that much. It'll get handled.”

Rather than going after his next contract with the passion that prompted him to show up at Jaguars camp last fall in a bank truck, Ramsey is spending more time working on his burgeoning bond with new Rams defensive coordinator Brandon Staley.

Rather than isolating Ramsey as a seldom-targeted shutdown corner, Staley indicated last week that the former Florida State safety could play all over the secondary for Los Angeles next season.

Ramsey doesn't want to give away the Rams' plans, but he's up for the challenges ahead.

"I’m very excited about the way I’m going to be utilized in this defense," Ramsey said. “I’ll leave it at that. I think my talents will be shown thoroughly.”

Ramsey didn't get his big contract from the Jaguars, who drafted him in 2016 and watched him become an All-Pro a year later. After his tongue-in-cheek armored truck stunt didn't work, he requested a trade several weeks later.

Ramsey's clashes with Tom Coughlin and the Jags' front office are only a bad memory now. The Rams have nothing but praise for their defensive centerpiece alongside Aaron Donald, and they seem eager to lock up the long-term future of a player who cost them two first-round draft picks in the trade.

Byron Jones became the NFL’s highest-paid cornerback in March when he agreed to a five-year, $82.5 million deal including $57 million guaranteed with the Miami Dolphins. Ramsey’s deal likely will eclipse Jones’ contract, and the Rams aren’t shy about making big commitments: general manager Les Snead has recently re-signed players to the biggest contracts ever given to a quarterback, a running back and a defensive player.

“There's a lot of dialogue” between Ramsey's agents and the Rams, coach Sean McVay said.

“What I can speak on is how impressed I've been with Jalen, the leadership I'm watching him take from afar,” McVay said. “When he came in, I was so impressed with him at first. But now you're actually able to have a foundation ... and this is a really impressive guy. You really get a feel for his football acumen, and how much he's able to understand and absorb.”

Ramsey has already formed a solid bond with Staley, the Rams’ rookie coordinator. They’re speaking over the phone about three times per day, and Staley is eagerly exploring new ways to use Ramsey’s talents.

“I love coaching this guy,” Staley said last week. “One of the unique parts about this whole thing is the relationship that I’ve been able to form with him in a short time. This guy has been really, really fun to work with. He’s got a high capacity to learn, he’s got a high capacity to lead. This game means a lot to him. His craft, his focus, his commitment, I couldn’t be more impressed with this guy.”