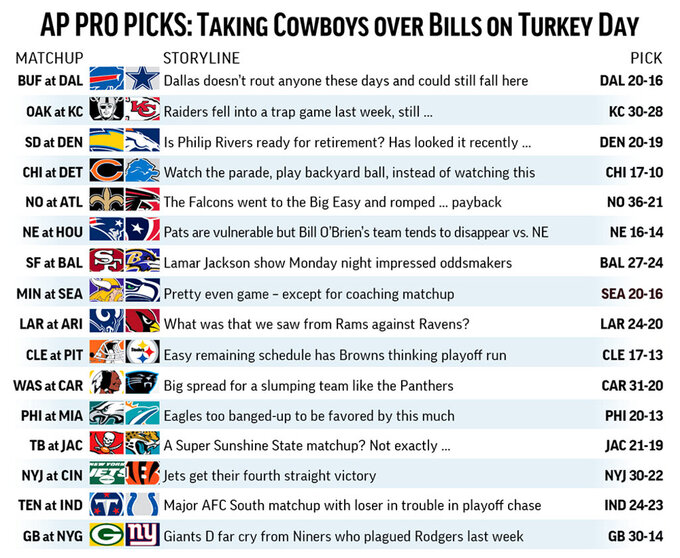 Never one to mince words, Jerry Jones has put Jason Garrett and his coaching staff on alert heading into what’s supposed to be a festive holiday.

Dallas plays its traditional Thanksgiving home game on Thursday, hosting the Bills. At 6-5 and coming off a very winnable game in New England that the Cowboys managed to mess up, Jones isn’t in a thankful mood. Maybe he should be considering the NFC East the Cowboys lead is a very weak division, especially with Philadelphia so damaged by injuries.

A flop against a Buffalo squad that is 8-3 and in the thick of the AFC wild-card race, but like Dallas hasn’t handled teams with winning records very well, could really sour Jones’ mood.

“It’s frustrating to be reminded of the fundamentals of football and coaching that beat us out there,” Jones said. “There is no question (New England) put pressure on people returning the kicks and people handling the ball on special teams. There is no question that (Patriots coach Bill Belichick) used that to put some special emphasis on it. So yeah, I’m frustrated.”

The Cowboys, ranked 11th in the AP Pro32, are a 7-point choice over No. 9 Buffalo. Dallas doesn’t rout anyone these days and could fall here.

KNOCKOUT POOL: Pittsburgh “Ducked” being Cincinnati’s first victim. Still on our boards are the PACKERS, who will rebound from that San Francisco debacle.

Is Philip Rivers ready for retirement? Sure has looked that way recently.

Watch the parade, do the cooking, play some backyard ball instead of watching this.

The Falcons went to Big Easy and romped. Payback.

Patriots are vulnerable, but Bill O’Brien’s team tends to disappear against New England.

Pretty even game — except for coaching matchup.

What was that we saw — or didn’t see — from Rams against Ravens?

Not sure anyone on Giants D could start for Niners, who plagued Aaron Rodgers last week.

Big spread for slumping team such as Panthers. We’ll buy into it.

Major matchup in AFC South, with loser in trouble in playoff chase.

Eagles too banged-up to be favored by nine over Miami Hurricanes.

Jets get their fourth straight victory, Bengals their 12th loss in row this season.