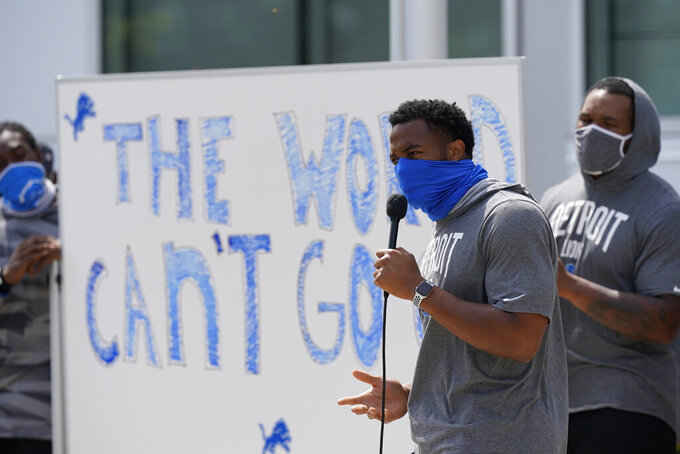 ALLEN PARK, Mich. (AP) — The Detroit Lions decided not to practice on Tuesday, protesting after a Black man was shot by police in Wisconsin.

“We came up with this one as a unit,” Detroit defensive end Trey Flowers said.

Lions coach Matt Patricia opened the team's morning meeting by allowing players to share their thoughts on the shooting of Jacob Blake, who is paralyzed from the waist down. Blake was shot Sunday, three months after the death of George Floyd at the hands of Minneapolis police.

The players continued to discuss Blake's shooting and shared their personal experiences regarding race in the locker room.

Lions players and Patricia later filed out of the team's practice facility, pushing a dry-erase board on wheels along the sidewalk to address the media. The words: “The world can't go on,” was written in blue on one side of the dry-erase board and “We won't be silent!! One pride,” was in black on the other side of the white board.

“If you’re being silent, you’re OK with it," Detroit safety Duron Harmon said. “You’re OK with what’s happening. No one in this organization or on this team is OK with it. ”

Patricia said he is proud of the players and hopes they inspire other people and teams in the NFL to take a stand for social justice.

Colin Kaepernick, exiled from the NFL since the 2016 season when he took a knee during the national anthem, shed light on police brutality and racial inequality while playing for the San Francisco 49ers.

Following the nationwide protests in the aftermath of Floyd’s death, NFL Commissioner Roger Goodell apologized to players for not listening to them earlier, encouraged them to protest peacefully, and denounced racism.

Lions quarterback Matthew Stafford said social justice issues were discussed as a team in Zoom meetings during the spring, when players were prevented from gathering at the team’s facility due to the COVID-19 pandemic.

“We’re dealing with times right now, where something is shaking in the world,” Flowers added. “It’s definitely an unprecedented time with the pandemic and something that has been going on for quite some time with the social injustice.”

The conversations about race continued when the team reported for training camp earlier this month, and in face-to-face discussions Tuesday morning a player shared that his mother calls him nightly to make sure he arrived home safely.

“It’s an incredible group of guys that we have in this locker room led by a coach who is unwavering in his ability to give us space to talk,” Stafford said. “We spent all morning talking about it. You have to give a lot of credit to coach for allowing us to do that. I’ve never been more proud.

“We had our team meeting this morning and no football was talked about," Stafford added.