Looking ahead: Ryan plans to bounce back from dismal showing 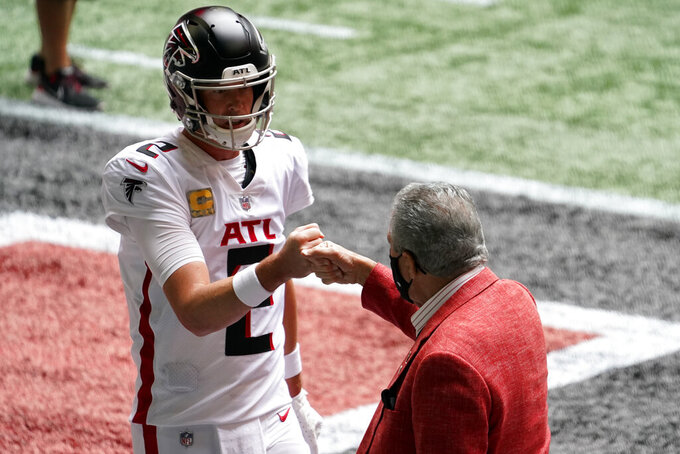 ATLANTA (AP) — This is not exactly how Matt Ryan wanted to spend his golden years at quarterback.

His team headed for its third straight losing season. His body battered from a whole bunch of sacks. His stat line hammered by his worst-rated game in more than seven years.

“I'm trying to make sure I go another five or six years before it happens like that again,” the Atlanta Falcons star said Wednesday, managing a bit of levity in what is shaping up as another lost year.

The Falcons (3-7) head into Sunday's game against the Las Vegas Raiders with little to play for except avoiding another losing campaign. And even that modest goal looks increasingly out of reach after last weekend's 24-9 pummeling by New Orleans.

Ryan completed just 19 of 37 passes for 232 yards with two interceptions against the Saints, which translated into a dismal rating of 48.5.

It was his lowest mark since a four-pick performance at Arizona on Oct. 27, 2013.

Ryan was sacked eight times by the Saints, one off his career high, and the Falcons were held to three field goals. While it was easy to blame the line for a lack of protection, it's clear the offensive woes were a collective effort.

The receivers struggled to get open. Ryan held on to the ball too long at times.

“It takes all of us,” he said. “When you give up a few sacks in a game, it's never just one thing. We've all got to pull our weight together, but that starts with me.”

The Falcons are confident that Ryan will bounce back against the Raiders (6-4), who have the league's 28th-ranked pass defense and are struggling to get pressure on opposing quarterbacks.

“Matt is going to trust his process, he's going to study and evaluate himself, look at what he needs to do this week, and do everything in his power to come back and make some plays,” Atlanta interim coach Raheem Morris said. ”We've got nothing but confidence in Matt.”

To his credit, Ryan never seems to linger on the disappointing performances, which have been rare over his long career. He gives himself an honest critique while watching the film on Mondays, but quickly moves on to the next opponent.

It's a routine that's always worked well for him.

“Usually by late Monday afternoon, I start moving on to who we're going against the next week,” Ryan said. “By the time I'm going home Monday night, I'm putting all my mental energy into the next opponent.”

This will be a milestone game for Ryan — the 200th regular-season appearance of his 13-year career.

He'll be making his 174th consecutive start since the only significant injury of his career caused him to miss two games late in the 2009 season, his second year in the league.

“I've been fortunate to stay healthy,” Ryan said, joking that a public-relations official was knocking on wood just off camera on the Zoom call. “I don't think about those things too much. I stay focused on the week to week. But I'm certainly proud of my longevity.”