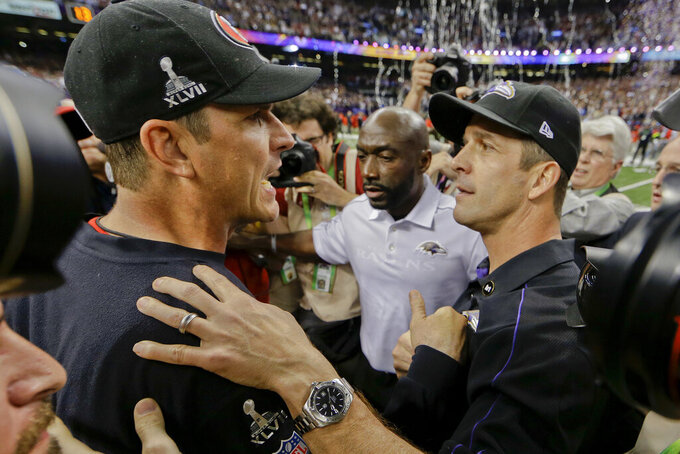 The Baltimore Ravens were on their way to a Super Bowl blowout when things really got dark.

Super Bowl 47 between the Ravens and San Francisco 49ers on Feb. 3, 2013, was pegged as the first between head coaches who were brothers. Jim Harbaugh stood on the San Francisco sideline and John Harbaugh guided Baltimore while their parents watched within the Superdome.

That story line was compelling, as was the fact that this would be the last game for future Hall of Fame linebacker Ray Lewis, who announced one month earlier that he would end his stellar 17-year career with the Ravens after the season.

Though two Harbaughs stood on opposite sidelines of each other, Jacoby Jones returned a kickoff for a Super Bowl-record 108 yards, Colin Kaepernick nearly orchestrated a miracle comeback and outcome was in doubt until the final play, this game — 4 hours and 14 minutes from start to finish — will be remembered as The Night the Lights Went Out in New Orleans.

Three first-half touchdown passes by Joe Flacco and Jones’ electrifying kickoff return to start the third quarter staked Baltimore to a 28-6 lead. The Ravens were riding a crest of momentum that seemed certain to propel them to their second NFL title when the unexpected occurred: A huge bank of lights within the stadium went dark, bringing the game to an eerie halt.

For 34 minutes, the players, coaches and fans loitered in semi-darkness. Understanding that this astonishing delay could, ironically, suck the energy out of the team, John Harbaugh gathered the Ravens together and offered up an impromptu speech.

Turns out, he was right. But not before Kaepernick almost brought the 49ers all the way back.

Operating a high-powered attack under the direction of offensive coordinator Greg Roman — who now holds the same job with the Ravens — Kaepernick rallied San Francisco with his legs and gifted right arm.

Running for 5 and 15 yards to open an 80-yard drive, Kaepernick completed an 18-yard pass to tight end Vernon Davis before connecting with Michael Crabtree for a 31-yard score to make it 28-13 with 7:28 left in the third quarter.

A touchdown run by Frank Gore and a field goal by David Akers made it 28-23, and suddenly, it was anyone’s game.

After Justin Tucker kicked a field goal for Baltimore, Kaepernick responded with a 15-yard touchdown run. Though the 2-point conversion try failed, the 49ers were now within 31-29 with 9:57 to go.

Tucker made it 34-29 before Kaepernick took San Francisco from its 20 to the Baltimore 7 for a first down with 2:39 remaining.

Baltimore subsequently ran three times before Sam Koch lined up to punt out of his own end zone. He took the snap, shuffled around and ran out of bounds for a safety with 4 seconds left.

That led to a free kick, and Ted Ginn was tackled as time ran out.

As Lewis and the Ravens celebrated, Jim and John Harbaugh met in the middle of the field to offer congratulations to each other for getting through one heck of a Super Bowl.

Days later, it was determined that the power failure was caused by a device installed specifically to prevent the lights from going out.

The company that supplies power to the Superdome said the device had been installed to protect the Superdome from a cable failure between the company’s incoming power line and the lines that run into the stadium.

Obviously, it didn’t work. And neither did Baltimore’s offense after the lights finally came back on.

The Ravens managed only two field goals following the power failure, but Flacco did enough beforehand to earn Super Bowl MVP honors. He completed 22 of 37 passes for 287 yards and three touchdowns with no interceptions.

That capped a playoff run in which Flacco completed 73 of 126 passes for 1,140 yards, 11 touchdowns and no interceptions, producing a 117.2 passer rating — the highest ever for a postseason since 1970, the year the AFL and NFL merged.

Soon after that, Flacco received the biggest contract ever for an NFL quarterback. But his stay in Baltimore ended last year, when rookie Lamar Jackson took over as the starter. Flacco was traded to Denver this past offseason and will finish the year on injured reserve.

Two other stars in that memorable Super Bowl had their careers take a turn for the worse.

Kaepernick made headlines for taking a knee during the Star-Spangled Banner before a 2016 preseason game. He participated in 12 games for San Francisco that year and has not played since.

Baltimore running back Ray Rice, who ran for 59 yards against the 49ers, was cut by the Ravens before the 2014 season after a video was released showing him striking his fiance in an Atlantic City elevator. No team picked him up.

Anquan Boldin had six catches for 104 yards and a touchdown for Baltimore to earn his only Super Bowl ring over a 14-year career. He was traded to San Francisco during the following offseason and recently retired as a Raven.

Lewis, meanwhile, was inducted into the Pro Football Hall of Fame in 2018. Teammate Ed Reed, who had an interception in that Super Bowl, was inducted this past August.

John Harbaugh still coaches the Ravens, but Jim Harbaugh left the 49ers after the 2014 season and now is the head coach at Michigan, his alma mater.

Both teams have changed dramatically since that February matchup in 2013, but each is playing exceptionally well this season heading into Sunday’s game at Baltimore — suggesting that a Super Bowl rematch is possible. Here’s a closer look:

The 49ers returned to the playoffs in 2013 but haven’t been there since. Yet, following a run of four straight losing seasons, San Francisco currently owns the best record (10-1) in the NFC under coach Kyle Shanahan.

Unlike Kaepernick, Jimmy Garoppolo is a one-dimensional quarterback who wins solely with his arm. Garoppolo has thrown for 2,731 yards and 20 touchdowns, with a mere 41 yards rushing.

The defense pulled its weight on Sunday night in a 37-8 rout of the Packers.

The Ravens (9-2) have flourished with an offense designed by Roman that adheres to the exceptional skills of Jackson. The 2016 Heisman Trophy winner is on course to set an NFL record for yards rushing by a quarterback and has also thrown 24 touchdown passes with only five interceptions.

One of the few remaining players from that Super Bowl team, guard Marshal Yanda, has opened many holes for the most productive running attack in the league.

Baltimore has long been known for its defense, and while this team lacks stars such as Lewis and Reed, Smith remains part of a productive defensive backfield that features safety Earl Thomas on the back end.

Defensive coordinator Don Martindale, an assistant coach on the 2012 team, has put together an effective unit that relies on blitzes and shrewd schemes.

Harbaugh remains on the sideline, but the architect of that Super Bowl team, Ozzie Newsome, now serves as an adviser to first-year general manager Eric DeCosta, who was Newsome’s assistant in 2012.

DeCosta has added several significant players —including Thomas and running back Mark Ingram — through the draft and free agency.