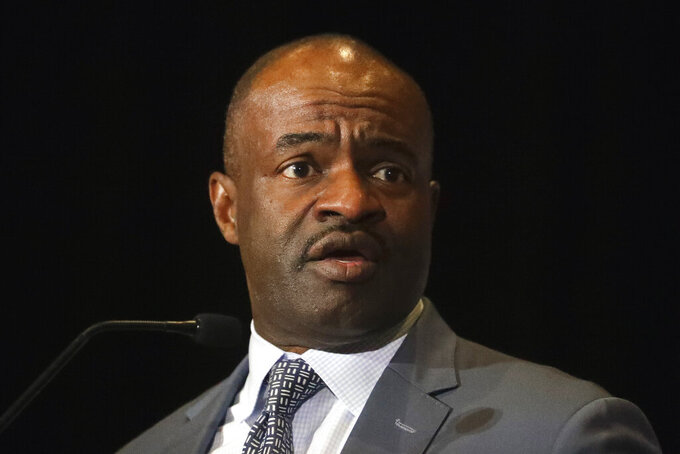 FILE - In this c, NFL Players Association executive director DeMaurice Smith speaks at the annual state of the union news conference in Miami Beach, Fla. The NFL reacted strongly and quickly Friday, Oct. 8, 2021, to a report that Jon Gruden used a racist comment about Smith in an email 10 years ago. A Wall Street Journal story noted that Gruden, then working for ESPN and now coach of the Las Vegas Raiders, referred in a racist way to Smith's facial features. (AP Photo/Chris Carlson, File)

NFL Players Association leader DeMaurice Smith is planning to move on after he serves one more term with the union.

The NFLPA's board of player representatives voted Friday to retain Smith as executive director, and union president JC Tretter said in a statement that the upcoming term would be Smith's last. The term could be as short as one year. Smith's deal was set to expire in March 2022.

“He was transparent with us about his interest in moving on after this term and for the stability and security of our union, he will work with our player leadership to ensure we have a succession plan in place for the next leader,” Tretter, an offensive lineman for the Cleveland Browns, said in a statement.

“De cares deeply about our union and about our players and we thank him for staying to help us secure a strong future for the NFLPA.”

The 57-year-old Smith said he is looking forward to “continuing to fight for players.”

“I shared with the players that I wanted this to be my last term as their executive director and that I wanted to stay to ensure that we have a succession plan which puts the NFLPA in the strongest possible position after I leave,” Smith said in a statement.

“From the beginning of my tenure here, my mission has been the same and the fact is that I serve at the pleasure of the players.”

Smith was elected in 2009 and led the players through the league’s lockout in 2011. That summer, the sides reached agreement on a 10-year CBA that included, among other things, reductions in practice and meeting times and in how much contact was allowed in those practices.

But there was some strong player opposition to the new collective bargaining agreement. Many stars, including Aaron Rodgers, Russell Wilson, J.J. Watt and Todd Gurley, spoke out against it. The total vote, among the nearly 2,500 union members who participated, was 1,019-959. Ratification required a simple majority.

While the union and the league have battled often over numerous issues, Smith and NFL Commissioner Roger Goodell came together last year during the COVID-19 pandemic to ensure the season went uninterrupted. The league and union negotiated prototcols that continue to be revised, allowing games to go on.

Retaining Smith for another term helps the union have a smoother transition to the next leader. Some players feel it should be a former player. Before Smith, Hall of Fame offensive lineman Gene Upshaw served as the NFLPA’s executive director for 25 years.