Rams RB Todd Gurley ruled out for showdown with Niners 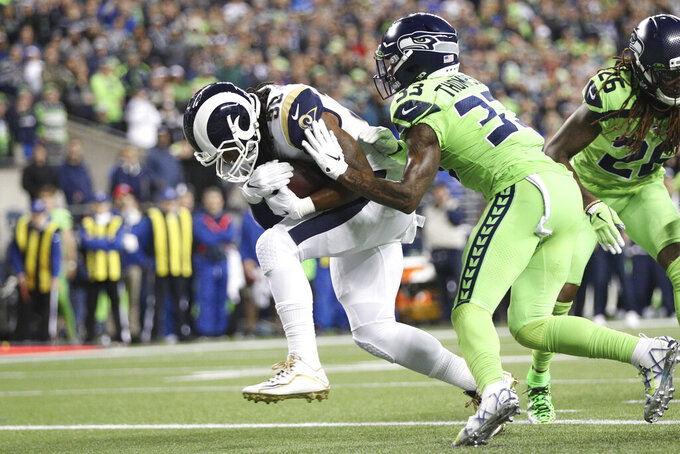 Los Angeles Rams running back Todd Gurley (30) carries the ball in an NFL game against the Seattle Seahawks, Thursday, Oct. 3, 2019, in Seattle. The Seahawks defeated the Rams 30-29. (Margaret Bowles via AP)

LOS ANGELES (AP) — Running back Todd Gurley won't play in the Los Angeles Rams' divisional meeting with the unbeaten San Francisco 49ers on Sunday because of a bruised left thigh.

The Rams confirmed Gurley is out while they signed running back John Kelly to the active roster Saturday. Gurley missed practice all week after getting hurt in Los Angeles' 30-29 loss at Seattle on Oct. 3.

Malcolm Brown is expected to make his second career start in Gurley's place, with rookie Darrell Henderson as his backup. Brown, who has been Gurley's backup for their five seasons with the Rams, has 114 yards and two touchdowns this season.

Despite the extra days off following the Rams' narrow loss to the Seahawks, Gurley will miss his first game of the season. He missed two regular season games last December with a left knee injury, but returned for the playoffs.

Gurley is 19th in the NFL with 270 yards rushing, and he has yet to produce a 100-yard game. The star running back's touches and snaps are down this season, although the Rams claim they aren't reducing his use to preserve his health.

The Rams also will be without two former Pro Bowl performers on defense. Cornerback Aqib Talib is sitting out with bruised ribs, and linebacker Clay Matthews is out for at least a few weeks after breaking his jaw in Seattle.