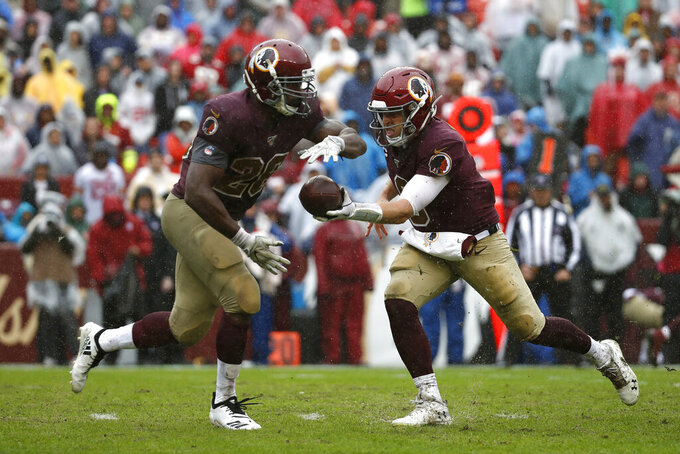 ASHBURN, Va. (AP) — After struggling in rainy, muddy and windy conditions during a loss to San Francisco, Washington Redskins quarterback Case Keenum has something else on his mind more than the emotions of going back to Minnesota this week.

"Only thing I'm thinking about right now is that I know it's going be about 70 degrees with zero chance of rain there," Keenum said.

Fair point. But that could make things even worse.

The Redskins could point to the weather as a reason their offense sputtered in a 9-0 loss to the 49ers on Sunday. They won't have that excuse under a roof Thursday night in Minneapolis against former quarterback Kirk Cousins' Vikings and face a short week to try to avoid a 1-7 start.

"Mentally, it's definitely tough playing on Thursdays," Keenum said. "But, I mean, you can't watch every piece of film. You can't overthink things, which is nice. You just go out there and play football."

The defense didn't allow the Niners to score a touchdown. That was weather-aided but something to build on for a group that was supposed to be Washington's biggest strength.

Linebacker Ryan Anderson was upset the Redskins didn't force more than one turnover.

On the defensive side, there were some times where we could've gotten the ball out," Anderson said. "We should have. That's all I worry about, and that's all I can control."

Penalties continue to hurt the Redskins on each side of the ball. Seven more for 47 yards against San Francisco stunted offensive drives and contributed to the defense being on the field too long — again.

"We have to do a better job," interim coach Bill Callahan said. "We have to get back and fix it."

Punter Tress Way continues to be Washington's best player. He leads the NFL with 50 yards a punt and handled the elements better than most if not all his teammates.

When a team's offense and defense can't get the job done, at least Way helps with field position.

Rookie receiver Terry McLaurin was targeted just twice and had one catch for 11 yards after looking like the offense's biggest bright spot in his previous five games.

"We just didn't quite utilize enough of that," Callahan said. "I take the fault on that. We just need to do more to get him open and utilize his skillset."

Starting free safety Montae Nicholson injured his right ankle in the loss and was in a walking boot Monday. Troy Apke, a 2018 fourth-round pick who intercepted Jimmy Garoppolo on a jump ball, figures to start in Nicholson's place.

"Troy, he's watched film," strong safety Landon Collins said. "He watched a lot of film when me and Montae played. He can pick it up from there."

Third-down back Chris Thompson missed the Niners game with a toe injury and said Monday he's feeling better but uncertain about playing at Minnesota. Tight end Vernon Davis is also a question mark with the lingering effects of a concussion.

The Redskins had just 12 pass attempts against San Francisco and will need to get back to airing it out against Cousins and the high-flying Vikings.

Change gears quickly to prepare for the Adam Thielen-less Vikings who have put up 28, 38 and 42 points in each of their past three games.