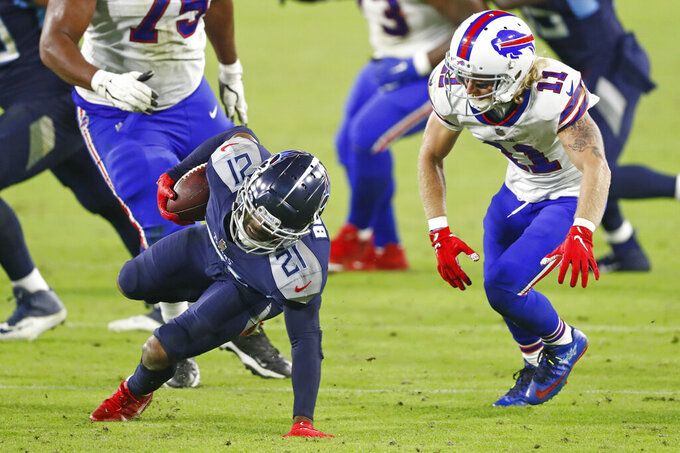 It went downhill from there.

The more prepared team sure didn’t look it in coming out sloppy and flat in losing its first game with a meltdown by the offense, defense and special teams.

Josh Allen was intercepted twice, and the Bills had another turnover late that Tennessee turned into 21 points in routing Buffalo 42-16 Tuesday night.

“We got punched in the mouth early on,” Allen said. “And I can’t do that to our defense, put them in vulnerable situations and allow their offense to have short fields. I did it twice tonight and I take that heavily upon myself.”

The Bills (4-1) were held to their fewest points this season, snapping a streak of three straight games scoring at least 30 points a game.

It also was the most points Buffalo had allowed since 2018 in a season-opening 47-3 loss at Baltimore. Nathan Peterman started that loss and threw two interceptions in the first half before giving way to Allen, then a rookie who went on to make his first career start the next week.

Buffalo also had 10 penalties for 56 yards on a night the Bills were without starting cornerbacks with Tre’Davious White because of a back injury and Levi Wallace on injured reserve. Linebacker Matt Milano and starting wide receiver John Brown also were out.

“Just uncharacteristic game for us,” Bills coach Sean McDermot said. “Uncharacteristically poor fundamentals, poor pre-snap discipline, turning the ball over. You’ve been around this game a long time, you can’t do that. There’s only one opponent, and that opponent’s on the other sideline. You can’t beat yourself."

They have a few days to make corrections before hosting the defending champion Kansas City Chiefs (4-1) on Monday night.

The third-year quarterback hadn't been intercepted twice in the same game since having three interceptions in a 16-10 loss to new England on Sept. 29, 2019. He had thrown just four interceptions in 17 games since, including playoffs.

“There’s some throws obviously he would like to have back,” McDermott said. “I thought he was patient. And then at times we may have pushed the ball into coverage there."

Allen said the interception in the third quarter really hurt their chances. The Bills trailed 21-10 when Allen's pass to Gabriel Davis went to Malcolm Butler for the Titans' cornerback's second pick of the game. Butler returned the ball 68 yards down to the Buffalo 12. Tennessee scored three plays later.

The Titans (4-0) were allowing Allen to attack underneath.

“I got greedy and made a bad decision, threw a bad ball, and really cost our team,” Allen said.

The Bills also allowed 20 first downs for a fourth straight game as the Titans finished with 25. Buffalo allowed 20 or more first downs only six times all last season, and this matches the longest stretch since the first four games of 2018.

“I know we have the players, and we’ve got the coaching to get it done,” Hughes said. “It’s just for us, we’ve got to understand we had a great year last year, we’re going to get everyone’s best this year. They’re not going to take us for granted. It isn’t going to be the Buffalo Bills are going to sneak up on people.”