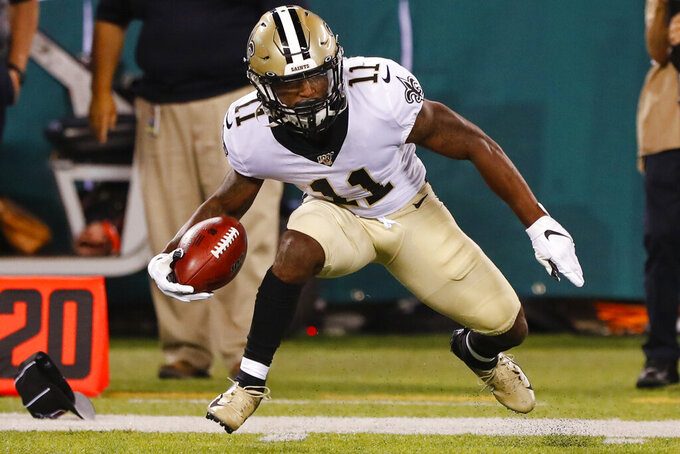 FILE - In this Aug. 24, 2019, file photo, New Orleans Saints' Deonte Harris (11) runs during the first half of a preseason NFL football game against the New York Jets, in East Rutherford, N.J. Saints rookie Deonte Harris wanted to believe his record-setting career as a return man at the Division II level of college football would translate in the NFL. It sure looked that way during the preseason, particularly on his 78-yard punt return touchdown against the New York Jets. Now the 5-foot-6, 170-pound Harris, who left college as NCAA’s all-time leader in combined kick and punt returns for touchdowns with 14, is set to make his NFL debut before a national TV audience against the Houston Texans on Monday night. (AP Photo/Noah K. Murray, File)

NEW ORLEANS (AP) — Saints rookie Deonte Harris wanted to believe his record-setting career as a return man at the Division II level of college football would translate in the NFL.

It sure looked that way during the preseason, particularly on his 78-yard punt return touchdown against the New York Jets. On Monday night, the 5-foot-6, 170-pound Harris, who left college as the NCAA's all-time leader in combined kick- and punt-return touchdowns with 14, is set to make his NFL debut before a national TV audience against the Houston Texans.

"It's crazy. I mean, because of my size, I've always been under the radar, so I've been used to it," said Harris, signed as an undrafted free agent out of Assumption College in Massachusetts. "But just being able to say Monday night I've got a game — and I'm about to play in an NFL game — is crazy."

Harris knew his odds were long when he was wrapping up high school in Baltimore. His best college offer was half a scholarship from FC school Towson. But Harris "didn't want to stay too local. All my friends were near home and I probably wouldn't have been able to focus as much as I wanted to, so I jumped to get out of state."

Harris, also a receiver, concluded his Assumption career with school records of 45 touchdowns and 6,173 all-purpose yards.

Findlay coach Rob Keys recalled noticing in preparation for that game how Assumption would lateral the ball to Harris even when kickoffs were directed away from him. So Findlay's kickoff team made a point of trying to limit Harris' return touches, only to see one kick bounce off an up back and deflect off another player to a spot where Harris was able to scoop it up.

"You think about all the preparation and some of the stuff we tried to do not to get the ball in his hands. You're thinking, there's no way he'll have the ball in his hands on this play, and there he goes running for a touchdown," said Keys, a former West Virginia defensive back who considers Harris as quick as any player he's seen on any level of college football.

"I'll never forget it. I don't forget losses, but that one especially, because it was an exceptional performance by one individual. It was amazing."

Harris "jumped out on the film," Saints first-year special teams coordinator Darren Rizzi recalled. Rizzi even traveled to Assumption to put Harris through a workout.

"I knew he could make people miss," Rizzi said, adding what he really wanted to see was how Harris handled booming, pro-style punts, as opposed to the rugby-style, end-over-end punts often seen at lower levels of college football. "I probably came away from that workout even more impressed."

Incidentally, Harris' alma mater had become better known in Louisiana in 2018, after Assumption graduate transfer Cole Tracy set place-kicking records at LSU, was a Lou Groza Award finalist and also got a tryout with the Saints.

During the late rounds of the draft, Rizzi lobbied for Harris and recalled that Saints staff "kind of joked with me" because of how enthusiastically he campaigned for him. At that time, the Saints figured they already had their return man in former Viking Marcus Sherels, a free-agent acquisition who ranked sixth in the NFL in punt return average last season and second in 2016.

But while Harris turned heads in the preseason, Sherels was sidelined by minor injuries and eventually reached a settlement with New Orleans that made him a free agent again.

By late August, it was apparent coach Sean Payton was sold on Harris when asked how he'd weigh Harris' explosive returns against a fumbled kickoff in New York that Harris had to scramble to recover at the 9-yard line.

"We can correct the latter," Payton said. "But it's hard to invent the first thing.

"He has real good vision. I think he is someone that is explosive. He can find the seam and we saw that immediately," Payton added. "All the other fundamentals and the time on task you get to spend with a first-year player exist with him. But there's a confidence about him and a confidence I think his teammates have about him."

Harris was an all-around youth athlete, a switch-hitting shortstop and outfielder who also played basketball and ran track. But as high school progressed, he focused more on his areas of greatest success: football and track.

Harris also gave up his favorite instrument, the clarinet. As fate would have it, he's starting his pro career in the birthplace of some of the best known jazz clarinetists ever, such as Sidney Bechet and Pete Fountain.

Perhaps living in New Orleans will rekindle Harris' relationship with the clarinet, but not now. He's singularly focused on making the Saints, the two-time defending NFC South champs, look smart for signing and keeping him.