Saints' Landry: It's 'a breath of fresh air to be back home' 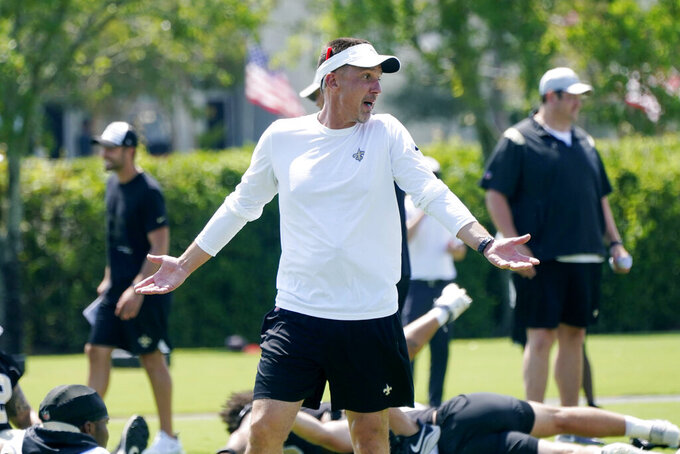 METAIRE, La. (AP) — Jarvis Landry grew up less than 60 miles from New Orleans and was a huge Saints fan.

Now he’s a Saints wide receiver after leaving Cleveland to sign with New Orleans as a free agent last month.

Landry, who grew up in Convent, Louisiana, played collegiately at LSU. He missed the first week of the Saints' voluntary Organized Team Activities because of a family commitment, but joined the team this week.

“He looked like what I expected Jarvis to look like,” Saints coach Dennis Allen said after Thursday’s workout. “He understands how to get open and he also understands how to make plays with the ball in his hands once he’s got it.”

Landry’s playmaking ability has earned him five Pro Bowl selections after four seasons with Miami, followed by four with the Browns.

“I’m going to be who I am,” Landry said. “I’m going to run great routes, catch the ball, and make things happen with a block for my teammates. That’s just who I am.”

Landry is a pivotal component to what New Orleans expects to be a much-improved receiving corps after finishing last season with the least efficient passing game in the NFL.

The Saints traded up in the first round of the draft to select Ohio State receiver Chris Olave at No. 11, Former All-Pro receiver Michael Thomas is expected to be healthy after missing all of last season and most of 2020 due to an ankle injury.

“It’s been a breath of fresh air to be back home,” Landry said, “to be around the culture that’s already been set here in New Orleans with the leadership that’s here already.”

Landry called Thomas, who isn’t participating in practice while he rehabs his ankle, “my brother.”

When Thomas was a high school player in California he reached out on social media to Landry and Odell Beckham Jr. when they were teammates at LSU.

“He was always curious and trying to learn things from myself and from Odell,” Landry said. “That kind of carried on when he got to Ohio State and carried on as we got into the league. I was in Miami and Odell was in New York at the time.

“We’ve always been talking. We’ve had a long-standing relationship. As time went on and he did the things he’s done in New Orleans you look up to that. He has even more potential going forward and I can’t wait to see him out here and lining up with him. It should be fun.”

Landry and Saints quarterback Jameis Winston have been getting to know one another in their initial practices together. Landry said Winston “is one of the reasons I came here.”

But the primary reason was an opportunity to return home.

“Jarvis is great,” said Marquez Callaway, who led the Saints’ wide receivers with 46 catches and six touchdowns last season. “Jarvis loves being here and we love having him here. He’s an older guy and he loves the game. Obviously everyone knows who he is.

“He loves the Saints. You can tell by how he plays and how he practices," Callaway added. “I love picking his brain, watching his play, watching his style, so I can add it to my game.”