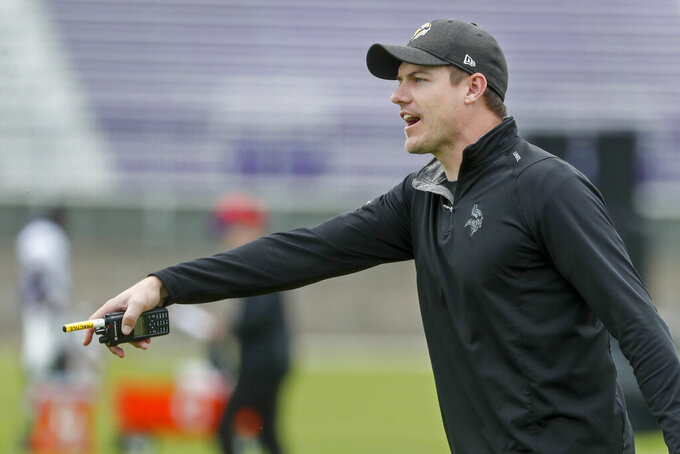 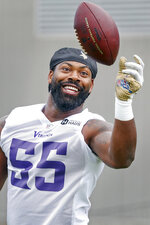 EAGAN, Minn. (AP) — Danielle Hunter became the youngest player in NFL history to reach 50 sacks, an athletic marvel for the Minnesota Vikings who was as durable as they come in this violent sport.

About 2 1/2 years later, with his gaudy sack total stalled out from consecutive injury-wrecked seasons, Hunter has found himself in sort of a reinvention mode.

After legitimate question about whether he'd return this year to the salary-cap-strapped Vikings, Hunter is not only back on the roster — and healthy — but flanked by a new pass-rushing pal on the opposite side of the defense in Za'Darius Smith.

“It kind of hurts just watching people play when you’re not able to play, so I’m happy just to be back with my teammates," Hunter said Tuesday, after one of the 10 organized practices the Vikings are allowed this spring prior to mandatory minicamp.

The Vikings converted an $18 million roster bonus into a signing bonus to spread out the cap hit and thus lessen the burden of his contract this year, but there's another megadeal awaiting him as long as he doesn't succumb to more serious injuries. Whether that comes with the Vikings or another club has yet to be determined.

Hunter befriended Smith, who was then with the rival Green Bay Packers, at the Pro Bowl after the 2019 season when they were teammates on the NFC squad. Their relationship goes back to the 2015 draft class as products of the mighty SEC, with Hunter out of LSU and Smith from Kentucky.

The Vikings made Smith, who is coming off a major back injury that limited him to one game in 2021, their top signing in free agency with a contract worth up to $47 million over three years.

“Just to be able to be here and have a chance to be on the opposite side of him is wonderful, man. I just can’t wait," Smith said.

Hunter is officially an outside linebacker now, no longer listed as a defensive end as the Vikings switch their base scheme from a 4-3 to the 3-4 alignment Smith played in with the Packers.

As Hunter was quick to note Tuesday in his first interview session with reporters since last Sept. 29, the Vikings lined up in a 3-4 defense often at Arizona on Sept. 19 to try to contain dual threat quarterback Kyler Murray. Hunter had three sacks in that game. So he's not concerned about a significant transition, from working out of a three-point stance to standing up on the edge.

His primary focus these days is just relishing being back on the field again. After a herniated disk in his neck required surgery and sidelined him for the entire 2020 season, Hunter was back in his usual form until he tore a pectoral muscle during the Oct. 31 game against Dallas. After a three-month rehabilitation, he said, he was back to normal strength.

“Anything can happen out there while I’m playing, you know?" Hunter said. “I love the game of football. That’s why I’m here. If I didn’t like it, I wouldn’t be here."