49ers defense getting healthy in time for playoff game 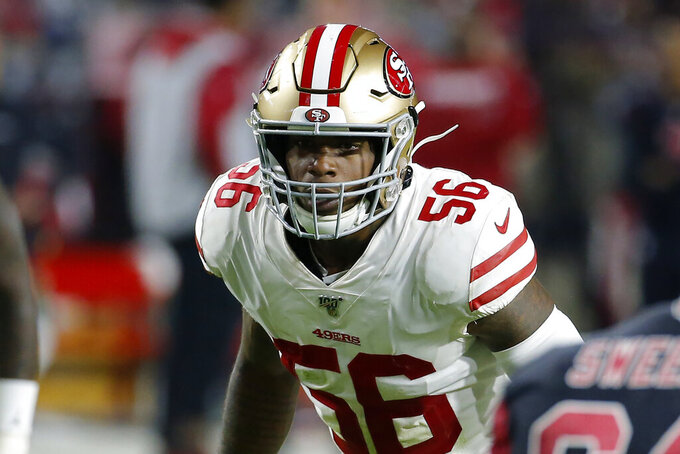 SANTA CLARA, Calif. (AP) — The San Francisco 49ers defense is about to be almost whole again at just the right time of the season.

Key starters Kwon Alexander, Dee Ford and Jaquiski Tartt are slated to return to the lineup for the Niners' playoff opener Saturday against the Minnesota Vikings after injuries took a toll on the unit over the second half of the season.

"It's kind of a confidence boost," linebacker Fred Warner said. "It's been a while since we had all those guys back on the field together. The more weapons we have the more powerful we'll be."

The returns bode well for the postseason because few teams were as dominant as San Francisco was defensively over the first eight weeks of the season when the defense was mostly healthy.

The Niners allowed only 0.86 points per drive during that span, ranking second best in the league. That number grew to 2.08 over the final nine weeks, ranking 30th.

While the competition did get tougher in the second half, the defense for the 49ers also wasn't nearly as potent with speedy linebacker and emotional leader Alexander going down with a torn pectoral muscle in Week 8, speed rusher Ford limited to four snaps over the final seven games because of a bum hamstring and versatile safety Tartt missing the final four games with injured ribs.

Having that trio back should provide a big boost against Kirk Cousins and the Minnesota Vikings in the divisional round. The impact is already apparent on the practice field.

“It's just fun to watch,” tight end George Kittle said. “Sometimes in practice when the defense is up, the offense is off and you'll be talking about plays and stuff. This week when we have all our guys back, you just want to watch because it's fun to see them work together again. They definitely brought a tempo back and picked it up a little bit.”

San Francisco won't be completely healthy on defense with run-stuffing defensive tackle D.J. Jones and reserve defensive end Ronald Blair out for the season, but this will be as healthy as the team has been since its dominant stretch early in the season.

All three returning players have key roles with Alexander considered the MVP of the defense by rookie defensive end Nick Bosa.

"He's the energy, all the time," Bosa said. "It's kind of hard for 16 games, every single day, to bring the passion and have fun with it. And if he's there, we have no choice but to have fun. ... Him being in the game and able to go hit somebody and get everybody going is super important."

Ford and Bosa were a potent edge rush duo early in the season and his speed has been missed the last few weeks. When Ford was on the field, the Niners pressured the quarterback on 32% of passing plays, according to SportRadar, a rate that would have led the NFL.

That dropped to 24.8% without Ford, and San Francisco has only four sacks in the last five games with Ford mostly sidelined.

"Whenever you have a guy outside who creates space to give you a true one on one, it just makes everybody on the defensive line better," coordinator Robert Saleh said. "It kind of unlocks everything. He's a major asset. That's why he's one of the best in football."

Tartt injured his ribs in a Week 13 loss at Baltimore and the defense has been much more susceptible to big plays in his absence, allowing almost as many pass plays of at least 20 yards the past four weeks (15) as the team gave up the first 12 when Tartt was healthy (19).

His return at strong safety will allow Jimmie Ward to move back to his usual free safety spot and return Marcell Harris to his usual reserve role.