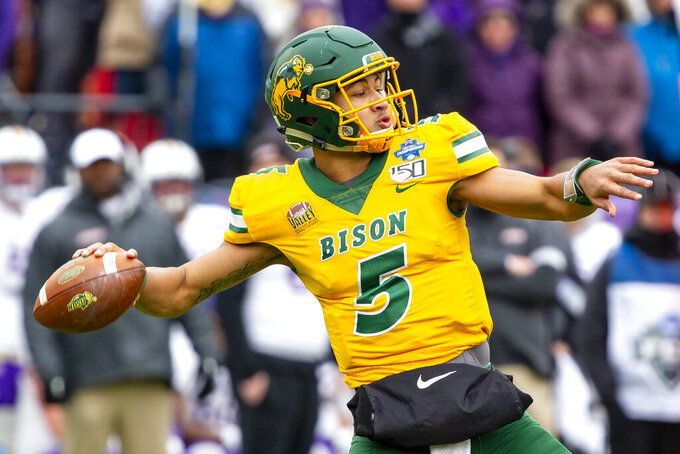 FILE - North Dakota State quarterback Trey Lance (5) winds up to throw during the first half of the FCS championship NCAA college football game against James Madison in Frisco, Texas, in this Saturday, Jan. 11, 2020, file photo. Lance is a likely first round pick in the NFL Draft, April 29-May 1, 2021, in Cleveland.(AP Photo/Sam Hodde, File)

SANTA CLARA, Calif. (AP) — Kyle Shanahan gets advice about what the San Francisco 49ers should do with the No. 3 draft pick wherever he goes these days.

Niners fans he runs into at restaurants, parents of his kids’ friends, referees at youth soccer games or longtime pals are happy to let the 49ers coach know which quarterback they believe he and general manager John Lynch should take after trading three first-round picks to move up to No. 3 in the NFL draft on Thursday night.

While the public sentiment among 49ers fans is pointing to Ohio State’s Justin Fields and North Dakota State’s Trey Lance as the top two choices after Trevor Lawrence and Zach Wilson are projected to go off the board at No. 1 and 2, Shanahan said he won’t be swayed by public opinion and that Alabama’s Mac Jones is squarely in contention.

“We do this for a living, and I think people should be proud of us that we won’t let that affect our decision," Shanahan said. "Then it’s up to us to live with the consequences.”

If this pick doesn’t work out the consequences for Shanahan and Lynch could be significant based on the heavy price they paid to move up in the draft.

San Francisco dealt the No. 12 pick in this year’s draft, first-round picks in 2022 and ’23, as well as a 2022 third-rounder to Miami for the third selection where they could be assured of one of the top passers in a quarterback-rich draft.

Shanahan said it’s a “little dramatic” to call this one of the most consequential decisions in franchise history, but it’s difficult to find many bigger ones.

The three likely possibilities offer different attributes and Shanahan said he believed all of them have what it takes to be the kind of quarterbacks teams can win with in the NFL.

Shanahan said he had a preference at the time of the deal in March but nothing “was set in stone.” He has been impressed with Jones, Fields and Lance through the evaluation process that included pro days that Shanahan attended in person, as well as Zoom interviews where the QBs tried to show their mastery of the offense on iPads.

While Fields and Lance offer much more in the running game and have the athleticism of some of the current successful young quarterbacks such as Patrick Mahomes and Josh Allen, Shanahan has always maintained that the ability to win from the pocket is paramount.

“There’s lots of different ways you can do it. I don’t look at it as trends in the league,” he said. “I look at it as there are some special players or special people. I don’t care when Drew Brees comes out, whether it’s 30 years from now, 30 years ago or today, Drew is going to be pretty good. So is Philip Rivers. So are all these guys.”

Shanahan said it would be great to find a passer such as Brees with the mobility of Lamar Jackson, but that every QB will be used differently and there's no clear-cut answer to which one is best.

“That’s what so exciting about this year,” he said. “I do see five guys. But no one’s ever a slam dunk."

The Niners made this trade because they wanted an upgrade over Jimmy Garoppolo, who has been a capable quarterback when healthy but has also missed 23 games because of injuries the past three seasons.

Shanahan and Lynch were adamant at the time of the trade that the plan was for Garoppolo to remain the starter in 2021. That stance has appeared to soften with Shanahan saying he “can’t guarantee that anybody in the world will be alive Sunday, so I can’t guarantee who will be on our roster on Sunday.”

Garoppolo is owed $24.1 million this season but none of that salary is guaranteed, making it easy for the Niners to get out of the deal if they want. Garoppolo does have a no-trade clause, which gives him say in where he plays next if San Francisco chooses to go a different direction.

“He’s taking part in our virtual meetings, plans on being at the workouts,” Lynch said. "Jimmy’s been completely professional, as he always has been with us.”

NOTES: Lynch said that the Niners will pick up the fifth-year option on right tackle Mike McGlinchey, which will give him a guaranteed $10.9 million contract for 2022. ... Lynch, Shanahan and the organization are donating $49,000 to the Trevin Dilfer Foundation, which is being launched by former Niners quarterback Trent Dilfer to honor the 18th anniversary of the death of his son.