49ers look to bounce back in home finale vs. Texans 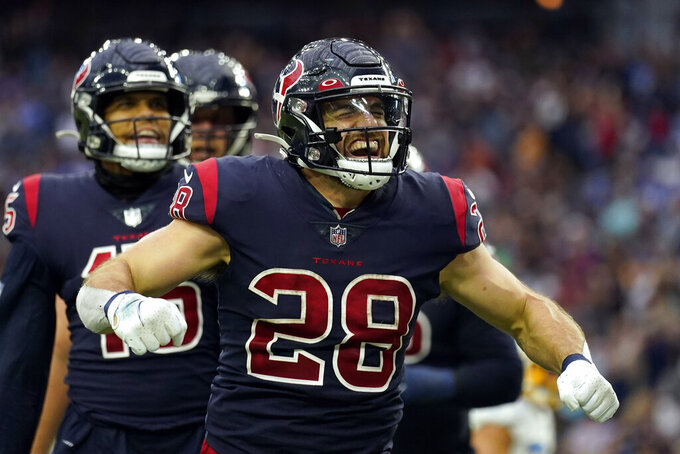 Houston Texans running back Rex Burkhead (28) celebrates after running for a touchdown against the Los Angeles Chargers during the second half of an NFL football game Sunday, Dec. 26, 2021, in Houston. (AP Photo/Eric Christian Smith)

TURNOVER DIFFERENTIAL: Texans plus-3; 49ers minus-4.

TEXANS PLAYER TO WATCH: RB Rex Burkhead had a career-high 149 yards rushing and two touchdowns last week as the Texans ran for a season-high 189 yards. It was the second 100-yard game of Burkhead’s career and first since the last game of the 2016 season with the Bengals. The Texans will rely on him to power the running game again this week after David Johnson was placed on the COVID-19 list Monday.

49ERS PLAYER TO WATCH: WR Deebo Samuel. The do-everything receiver is coming off his fourth game of the season with at least 150 yards receiving after having nine catches for 159 yards. Samuel joined Hall of Famer Jerry Rice (five games in 1995, four in 1986) as the only Niners to do that. Samuel also contributed once again on the ground with five carries for 32 yards as he became the first Niners player since Frank Gore in 2009 to top 1,500 yards from scrimmage with at least 12 TDs.

KEY MATCHUP: Niners DE Nick Bosa vs Texans OL. Houston has struggled in pass protection this season and will have to contend with one of the best rushers in Bosa, who is tied for third in the NFL with 15 sacks.

KEY INJURIES: Houston had 16 players out last week because of COVID-19 protocols, but most of those players will return after 13 were taken off the list Wednesday. Key players returning are top receiver Brandin Cooks, C Justin Britt, K Ka’imi Fairbairn, LB Kamu Grugier-Hill and DL Jonathan Greenard. ... WR Phillip Dorsett was placed on injured reserve after hurting an ankle Sunday. ... San Francisco QB Jimmy Garoppolo is dealing with a right thumb injury that could sideline him this week. Rookie Trey Lance would make his second start if Garoppolo can't go. ... The Niners hope to get RBs Elijah Mitchell and Trey Sermon (ankle) back this week. ... LB Dre Greenlaw (groin), DT Maurice Hurst (calf) S Talanoa Hufanga (knee) and LB Azeez Al-Shaair (knee) all could miss the game Sunday.

SERIES NOTES: The Niners have won three of the four matchups, including a 26-16 win at Houston in 2017. ... The four matchups between the teams are the fewest among any current teams. ... The Texans' only win in the series came in 2009 at home.

STATS AND STUFF: Houston has won consecutive games for the first time this season and is seeking its first three-game winning streak since winning nine in a row in 2018. ... Rookie QB Davis Mills was 21 of 27 for 254 yards and two touchdowns last week and has thrown for at least 200 yards in three consecutive games. ... Cooks has had two consecutive 100-yard receiving games. ... WR Chris Conley led the team with 60 yards receiving and a touchdown against the Chargers. ... Rookie WR Nico Collins had his first career TD catch last week. ... Rookie TE Brevin Jordan had a career-high 56 yards receiving against the Chargers. ... CB Tavierre Thomas had eight tackles and a 48-yard interception return for his first career touchdown last week to earn AFC defensive player of the week honors. ... CB Desmond King had seven tackles and defended a pass vs. LA. ... CB Jonathan Owens, who has spent most of the season on the practice squad, had his first career interception and the first fumble recovery of his career against the Chargers. ... The 49ers can clinch their second playoff berth in the past eight seasons this week with a win and a New Orleans loss to Carolina. ... The Niners had been 18-0 under coach Kyle Shanahan when leading by at least 10 points at halftime before losing last week. ... San Francisco leads the NFL with six TD drives this season of at least 90 yards. ... The 49ers allowed Tennessee to convert of 16 third downs last week, including six of at least 10 yards, which was tied for the most in a game since 2000. ... San Francisco TE George Kittle has 4,450 yards receiving in his career, 63 shy of tying Kellen Winslow Sr. for the second most for a tight end in his first five seasons. ... San Francisco K Robbie Gould needs one FG to tie Tommy Davis for the second most in franchise history with 130. Ray Wersching has the record with 190.

FANTASY TIP: With Mitchell and Sermon likely set to return this week, the Niners could have a crowded running back room with Jeff Wilson Jr. also healthy and Samuel likely to steal some carries. That might make it difficult to count on any of the backs for a big game.