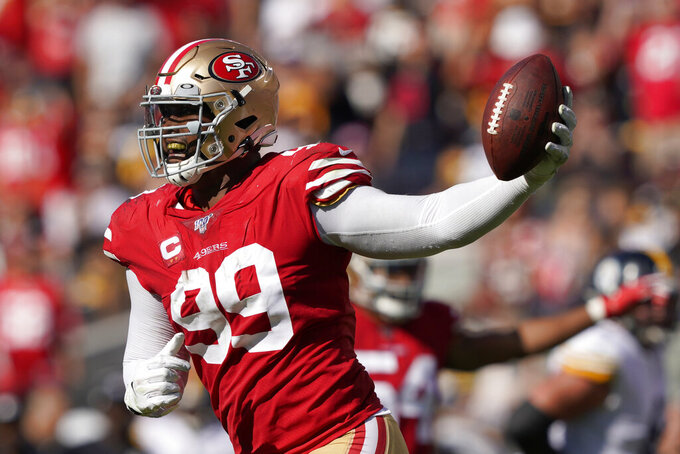 SANTA CLARA, Calif. (AP) — This was exactly the kind of game the San Francisco 49ers would have lost in coach Kyle Shanahan's first two seasons.

This year's version was able to overcome all of that and come up with a third straight win to open the season, beating the Pittsburgh Steelers 24-20 on Sunday for the Niners' best start to a season in 21 years.

San Francisco heads into an off week at 3-0 thanks to surviving a rough offensive performance in the opener at Tampa Bay and the five turnovers against the Steelers in the home opener. In between was a 41-17 win at Cincinnati when just about everything went right.

For Shanahan, it's the wins on the bad days that are most gratifying because the Niners were unable to do that the past two seasons, when they won 10 games combined.

"I get a lot more satisfaction out of the Tampa one and (Steelers) one because those ones are really tough," he said. "The Cincinnati game was a little make believe for me. It wasn't make believe, the guys earned it and we did well. But we should win when things are going like that."

The win against the Steelers came because the defense held Pittsburgh to field goals after two turnovers deep in San Francisco territory. Arik Armstead forced a fumble to set up the winning score, and Jimmy Garoppolo made enough big plays while under pressure to pull it out with a 5-yard TD pass to Dante Pettis with 1:16 remaining.

Pass rush. The 49ers got another strong performance from the defensive line with DeForest Buckner and Dee Ford each getting sacks and the whole unit not allowing Mason Rudolph to feel comfortable. Rudolph managed just two completions all day on passes that traveled more than 1 yard downfield. He was often rushed by the pressure, including by Armstead on his interception that set up San Francisco's touchdown in the third quarter.

Ball security. The Niners turned over the ball five times. Matt Breida bobbled a short pass, turning it into an interception. Another pass went off receiver Pettis' hands for an interception and San Francisco lost three fumbles in the red zone. One came on a bad snap by Weston Richburg, another when a shotgun snap hit Richie James Jr. as he went in motion, and Raheem Mostert also lost one when he was hit on a run in the secondary. Mostert also mishandled a pitch, leading to an 18-yard loss.

LT Justin Skule. The sixth-round rookie from Vanderbilt didn't look overmatched at all in his first career start in place of the injured Joe Staley. The 49ers gave Skule extra help in several situations and he got beaten by Bud Dupree a couple of times, but he played well enough for the Niners to run their usual offense without worrying about keeping Garoppolo safe.

"He was fearless from the minute I saw him (before the game)," Garoppolo said. "He just had the right mindset and everything."

CB Jason Verrett. Forced into action when starter Ahkello Witherspoon left with a foot injury in the fourth quarter, Verrett struggled in his first game in more than two years. He committed a 32-yard pass interference penalty and then was beaten deep by Diontae Johnson on a 39-yard score the following play. Verrett didn't get back into the game after that.

Witherspoon has a sprained left foot and will miss at least a month. Emmanuel Moseley could get the first chance in his place. ... WR Jalen Hurd (back) and RB Tevin Coleman (ankle) could both return after the bye week.

7 — With two more takeaways against the Steelers, the 49ers have now forced seven turnovers. That matches the total from all of last season when San Francisco set a record for futility.

The 49ers get a week off and then host Cleveland in prime time on Oct. 7 when they will seek their first 4-0 start since 1990.