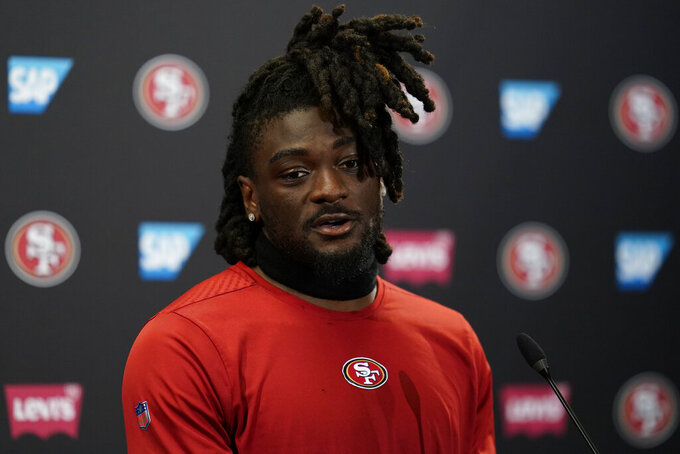 SANTA CLARA, Calif. (AP) — Brandon Aiyuk feels like he's in a good place after an up-and-down first two seasons in the NFL.

Aiyuk followed up a promising rookie season in 2020 with a stint in coach Kyle Shanahan's doghouse early last season. Aiyuk recovered in the second half to make a big impact on San Francisco's offense and is building on that for 2022.

“Everybody knows how the situation was last year and how stuff went,” Aiyuk said. “I feel like I’m happy about the way things turned out and how everybody grew and moved on and moved past and got to move forward from certain situations in the past.”

Shanahan said Aiyuk's rollercoaster start to his career can be attributed partially to the weird circumstances he faced as a rookie.

San Francisco traded up six spots to take Aiyuk 25th overall in 2020 but he had little time to acclimate to the NFL because of the truncated offseason caused by the COVID-19 pandemic.

Aiyuk handled that well by catching 60 passes for 748 yards and five TDs as a rookie. But he didn't realize how much work he needed to put in the next offseason and fell behind early in training camp.

That led to frustration from Shanahan and low usage early last season as he fell behind Trent Sherfield at one point. Aiyuk had only nine catches for 96 yards the first six games before hitting his stride the second half.

Aiyuk had 47 catches for 730 yards over the final 11 games, delivering the walk-off touchdown in overtime to beat Cincinnati in Week 14.

“Instead of blaming other people and making excuses, he worked, didn’t say a lot, just kept going to work,” Shanahan said. “He’s a smart dude and he is perceptive and he learned, ‘Wow, this is right. This is totally different. Man, I’m going to be ready for year three, because year two was really my rookie year.’ That’s why he is so much further ahead right now.”

Aiyuk said the experience last season when he was shown the commitment he needs in the offseason and in training camp was valuable and is the reason why he's in a much better place early in 2022.

“You have to go through things to learn,” he said. “I feel like I’ve been through a whole lot in my first two years. But I wake up every day just grateful for every lesson learned. I feel that’s best way to get to learn from things."

Aiyuk has stayed close to new starting quarterback Trey Lance all offseason, working out together in Southern California before and after the formal offseason program and developing into his most trusty receiver while Deebo Samuel remains out of practice in search of a new contract.

Lance said the two have gotten much closer this offseason after Aiyuk barely talked to him early in their relationship.

“The first couple times we worked out together he didn’t talk to me at all,” Lance said. "Right after I got drafted, he said what’s up to me and we went to work. But I kind of just learned really quickly that’s kind of how he carries himself. He’s about his work. He’s about business when he is on the field. We’ve gotten really close this offseason and I’m super excited for him this year.”

NOTES: DL Arik Armstead sprained his right knee on Wednesday and will miss a couple of weeks of practice but Shanahan doesn't believe it will be a long-term issue. ... LT Trent Williams returned to practice after missing the past two days for the birth of a child. ... San Francisco signed DL Tomasi Laulile, who played in the USFL earlier this year. ... T Mike McGlinchey (quadriceps) and DT Javon Kinlaw (knee) are expected to take part in team drills beginning Saturday as they work their way back from injuries.