Athlete power: ‘Shut up and play' is tossed from the game 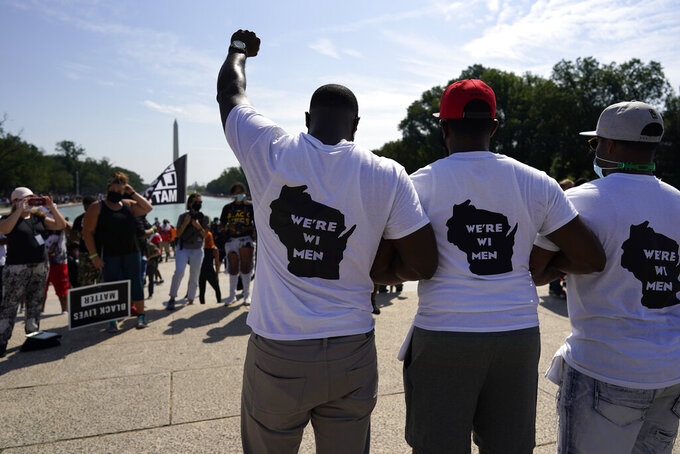 Men from Milwaukee wear "We're WI Men" T-shirts as they attend the March on Washington, Friday Aug. 28, 2020, in Washington, on the 57th anniversary of the Rev. Martin Luther King Jr.'s "I Have A Dream" speech. (AP Photo/Carolyn Kaster)

With every get-out-the-vote campaign, every shutdown of a major sport, every detailed list of actions by athletes demanding change, one new reality comes into sharper focus: The days of “shut up and play” are winding down.

This summer of police shootings of Black people — the aftershocks exacerbated by a coronavirus pandemic that has upended life everywhere — has emboldened athletes to draw on the platform they've long commanded.

One big difference between now and even a year ago is that there's less indecisiveness on how hard those athletes will press the issues. And to some, the odds seem greater, this time, that what the athletes are calling for might actually come to pass.

“None of us are politicians,” said NFL veteran Marcedes Lewis, an outspoken tight end who plays for Green Bay, which is in the same state where Jacob Blake was shot in the back by police last Sunday. “We get paid to go out there and play and do our job. At the same time, wrong is wrong and right is right. It's encouraging to see guys stepping up.”

In tennis, golf, hockey, baseball, basketball, soccer and football, there have been gestures big and small, and in ways once unimaginable.

Nine NFL teams canceled practices on Thursday — a notable break from routine for a league that still has not found a job for Super Bowl quarterback Colin Kaepernick, who kneeled on the sideline during the national anthem to protest racial injustice. The police shooting of Blake in Kenosha, Wisconsin, came four years to the day after Kaepernick's first protest.

The Baltimore Ravens, in a posting that went viral, put out a statement with a seven-point plan of action to help combat systemic racism in the U.S.

“If you’re not trying to lead this world, lead this earth with making a positive impact, what are you here for?” receiver DJ Chark Jr. of the Jacksonville Jaguars said. “Whether it’s sports that gives you the platform, whether it’s music, entertainment, whatever it is. If you have a voice, I think if you’re contributing to something that is going to help, something that is positive, I think you should use it.”

NBA players spearheaded the latest flurry of activity, when the Milwaukee Bucks refused to take the court following Blake's shooting. That led to serious consideration of canceling the season altogether. Such a move was avoided in part because of the counsel of former President Barack Obama and input from Michael Jordan. According to an ESPN report, the NBA great and Charlotte Hornets owner asked players to consider that their voices would be better heard on the court than off it.

“We understand how strong our voice is, how powerful our voice is and ultimately we decided if we go away from this stage we don’t necessarily have that same platform so we stood in solidarity,” said Chris Paul, the Oklahoma City Thunder guard and president of the players' union.

Obama advised the players and league to establish a social justice coalition, made up of players, coaches and owners, that will focus on voting raccess and police and criminal justice reform. Some teams are making plans to allow their arenas to serve as polling places for November's election.

All this stands in stark contrast from the predominant attitude of athletes during Jordan's prime — an attitude Jordan himself embodied. During a Senate race in his home state of North Carolina, Jordan was reluctant to use his star power to endorse Harvey Gantt, the African American Democrat running against Jesse Helms. “Republicans buy sneakers, too,” was Jordan's now-famous quote. It still resonates today, if only because it is becoming the antithesis of what current NBA stars are doing.

This month, Steph Curry was given speaking time at the Democratic National Convention to endorse Joe Biden for president.

LeBron James has created “ More Than A Vote,” a website designed to urge Black people to vote and to root out Black voter suppression. Among the more than four dozen Black athletes who are part of the cause are Super Bowl MVP Patrick Mahomes and Olympic champion sprinter Allyson Felix.

“It's a start. The players are pressuring the owners in the only language they understand — the money,” said 30-year-old Jahreem Edwards, a Black resident of Washington who attended the March on Washington on Friday. “LeBron James has 70 million Instagram followers. That's power. That's just about as much power as any Black man in America.”

But 61-year-old Robert Norris, another Black resident of Washington who attended the march, thinks players need to go even bigger.

“It means something to me if they completely shut down every sport," he said. “Black athletes and celebrities have not been fully welding their power. It has to be across the board. It has to be as systemic as the racism is."

The Olympic world that Felix inhabits has been among the slowest to heed the call for changes despite commanding the attention of huge swaths of the globe's population every two years.

The movement that gave rise to some of the most notable civil rights protesters in any venue — Muhammad Ali, and Tommie Smith and John Carlos — is still studying the idea of relaxing its rule that forbids protests on the medals stand. It is taking heat from across the globe, but especially from the U.S. On Friday, American athletes held the first meeting of a newly formed council on racial and social justice to tackle the issues at the Olympic level.

Given the glacial pace at which attitudes shift at the Olympic level, a council designed to tackle these issues looks a lot like progress. More concrete and fast-moving are the moves in the NBA, NFL and other American pro sports, where a growing number of players are less conflicted about calling off games, calling for action and, in short, using their platform for change.

How big an impact will it all have?

“It’s those ripple effects,” said Jeremy Jones, founder of Protect Our Winters, an athlete-driven environmental group that is spearheading its own voting project this year. “And when you say, ”Do you think it’s starting to make a difference?′ I think in a lot of ways, we’ll look back at this time and say that this was a turning point.”