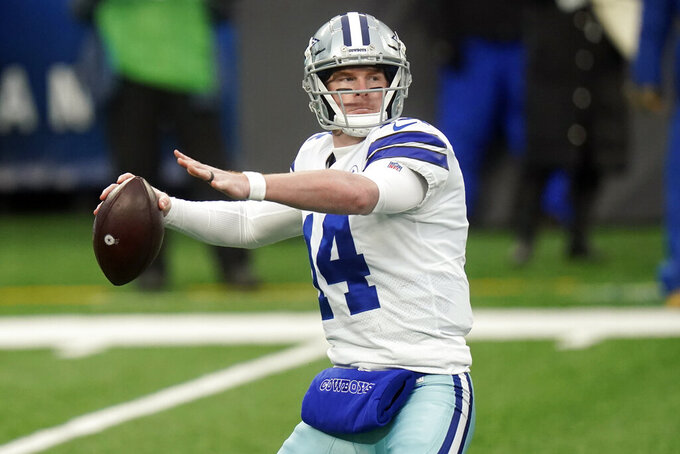 The three-time Pro Bowler could earn an additional $3 million in bonuses.

Dalton signed with Dallas last May to back up Dak Prescott after getting released by Cincinnati. He wound up starting nine games, officially going 4-4 to bring his career record to 74-65-2, with Prescott suffering a season-ending ankle injury in Week 5. The Cowboys finished 6-10 and missed the playoffs for the second year in a row.

Dalton has thrown for 33,764 yards, 218 touchdowns and 126 interceptions. He set several Bengals passing records over nine seasons and made the Pro Bowl in 2011, 2014 and 2016. But he never led Cincinnati past the first round of the playoffs.

Signing Dalton gives the Bears two veteran quarterbacks with Nick Foles also on the roster. And it almost certainly shuts the door on 2017 No. 2 overall draft pick Mitchell Trubisky re-signing.

The Bears seemed to make clear their feelings about Trubisky prior to last season when they acquired Foles from Jacksonville and declined their fifth-year option for 2021 on their once-prized QB.

Trubisky got benched in a Week 3 comeback win at Atlanta and didn’t return to the lineup until late November. In between, Foles struggled and suffered a hip and glute injury.

The Bears made the playoffs despite going 8-8 in the regular season for the second year in a row, then got knocked out in a convincing wild-card loss at New Orleans.

Also on Tuesday, the team announced a three-year extension through 2023 with defensive end Mario Edwards Jr.

Edwards had a career-high four sacks and seven quarterback hits after signing with Chicago prior to last season. He has 14 1/2 sacks and 30 QB hits over six seasons with the Raiders, New York Giants, New Orleans Saints and Bears.