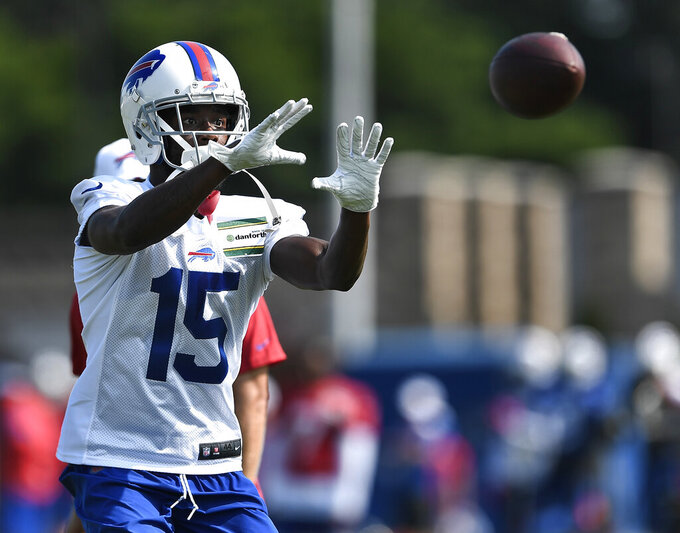 SPARTANBURG, S.C. (AP) — Panthers coach Ron Rivera decided to have a little fun with Bills coach Sean McDermott over the weekend, sending a screenshot of the heat index in Spartanburg, South Carolina, at 110 degrees along with an orange emoji face dripping with sweat.

"A psychological game," Rivera joked of the scorching heat that awaits McDermott and the Bills this week.

The Panthers will host the Bills for joint practices Tuesday and Wednesday at Wofford College prior to their preseason game Friday in Charlotte, North Carolina.

It is a reunion of sorts for players, coaches and front office officials.

When McDermott left his post as Panthers defensive coordinator in 2017 to join the Bills it started a pipeline between Carolina and Buffalo.

A few months later, the Bills hired Panthers assistant general manager Brandon Beane as their GM. A handful of former Carolina players also followed McDermott to Buffalo as free agents. The teams have also made a few trades, including one involving 2014 first-round draft pick Kelvin Benjamin.

The exodus of former Panthers became so rampant that fans and players alike in the Carolinas referred to the Bills as "Carolina North."

So organizing joint practices only seemed part of the natural evolution for two teams that act like brothers.

"I think it helps going in knowing that we are going to be on the same page with them," Beane said.

Rivera said his close relationship with McDermott will allow them to control the tempo of practice.

"We're going to try and create as much live action as possible," Rivera said. "... We're not looking for the live contact (or tackling). That's one thing we can't afford to have."

Fighting is another no-no.

Rivera and McDermott discussed the ramifications of any on-field skirmishes, and agreed anyone involved in a fight will be removed from practice and disciplined.

"We're not here to fight," Rivera said. "That's bull. What we're here to do is learn from each other and help each other win. That's the most important opportunity to come out of this."

The Panthers previously participated in joint practices against the Dolphins in 2015 and Titans in 2017, and Rivera said he doesn't expect any altercations.

Beane said the Bills had other options for joint practices, but chose Carolina partly because they wanted to practice in a hot weather location.

The Bills host their training camp at St. John Fisher College in Pittsford, New York, which is traditionally cooler and less humid than Spartanburg, where blazing 90 degree temperatures during the summer are the norm.

Beane will get his wish.

The forecast calls for temperatures to reach the mid-90s on Tuesday and Wednesday with the heat index above 100, although both practices will be held in the morning and completed by noon.

"I got a text message about the weather from Ron, too," Beane joked. "He just can't help himself. He's always joking. But it's all good banter."

McDermott said the Bills' training staff has helped players prepare for the heat.

"It's not any surprise to us," said McDermott, who spent six summers in Spartanburg as Rivera's assistant. "The heat is real down there. So we want to make sure we're out in front of it."

The Bills like the idea of practicing against Carolina's 3-4 defense given they're scheduled to play a few teams with similar schemes this season.

For years, he and Panthers quarterback Cam Newton exchanged barbs during training camp, regularly arguing about whether the defense got the best of the offense, or vice versa. With Munnerlyn and linebacker Thomas Davis no longer with the Panthers, Newton hasn't been able to find a willing or able trash-talk counterpart on defense and Carolina's practices have been strangely subdued.

"I'm going to make some plays guaranteed (and) when I make the plays they're going to know about it," Munnerlyn said.

Trash-talk aside, Panthers general manager Marty Hurney said the joint practices should serve as a great evaluation opportunity for both teams.

"Not only is it a chance to evaluate individuals in a competitive environment against players they don't go up against every day, but it helps gauge where you are on all three units as a group," Hurney said.