Broncos in thick of playoff chase for first time since 2015 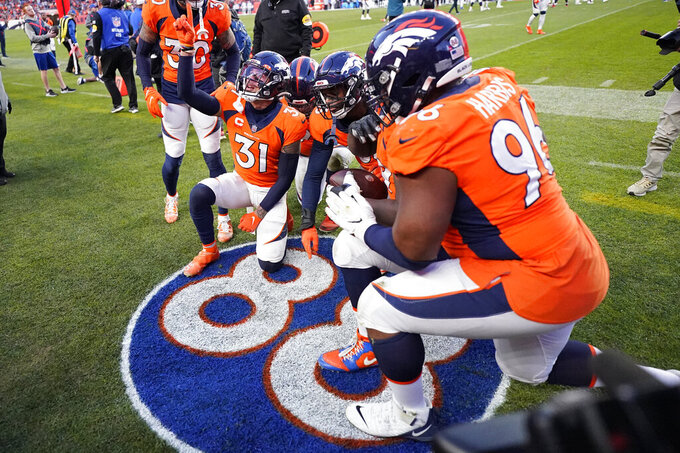 Denver Broncos players kneel on a painted tribute to former Denver Broncos wide receiver Demaryius Thomas during the second half of an NFL football game against the Detroit Lions, Sunday, Dec. 12, 2021, in Denver. (AP Photo/Jack Dempsey)

DENVER (AP) — What usually drives the Denver Broncos this time of year is seeing what's under the Christmas tree and envisioning what sunny locale they'll be jetting off to come January.

The Broncos (7-6) thrust themselves into the thick of the AFC playoff scramble with a 38-10 blowout of the Detroit Lions on Sunday.

The postseason hasn't been a possibility for the Broncos in mid-December since 2015 when Peyton Manning was hollering “Omaha! Omaha!” at the line of scrimmage instead of bantering with baby brother Eli from the broadcast booth on "Monday Night Football."

“This is the first time we've been in this position this late in the season where we have everything right in front of us,” fourth-year linebacker Bradley Chubb said Monday. "So, it feels different, guys coming in at 10 o'clock, the first lift option we've got, trying to get it in, watching the film.

“Everybody's locked in, man. It's been fun to see."

The Broncos haven't had a winning record in December since 2016, when they finished 9-7 and missed the playoffs following Manning's retirement a month after winning Super Bowl 50.

Coach Gary Kubiak stepped down after that season and the franchise suffered through 5-11 and 6-10 seasons under Vance Joseph before Vic Fangio replaced him and went 7-9 and 5-11 in his first two seasons.

That stretched Denver's skid to four consecutive losing seasons, its longest such stretch since the 1970 AFL-NFL merger.

These erratic Broncos know they've let a couple of games slip away. They walloped heavyweights such as the Cowboys (9-4) and Chargers (8-5) and whimpered against lesser teams, including the Eagles (6-7) and Raiders (6-7).

“I wish we could have had a better record, you know. It would have been nice to grab one or two more of those losses,” Fangio said. “But we're playing good football right now overall. We have our issues that we have to get solved like everybody does. But I feel good about our team moving forward to these last four games."

Up next are the Cincinnati Bengals (7-6), who were installed as an early 1-point underdog, according to FanDuel SportsBook. The showdown with Cincy figures to draw more interest than Sunday's game against the Lions (1-11-1), where there were 10,005 no-shows.

“Our fans are great. Our stadium's electric all the time,” Fangio said. “You know, maybe there will be a few less no-shows and it'll even be a little bit louder.”

The ground game, and OC Pat Shurmur had better stick with it the rest of the way after showing a tendency over the past two years to go away from an effective ground game.

“We had a good commitment to the run game, and we need to have that, especially this time of year,” Fangio said after the Broncos rumbled through the Lions for 184 yards and three touchdowns on 39 carries.

"If you can run it, you can build a lot of things off of it. You know, we had some bootlegs that came open that were critical, play-action passes. So that’s where it needs to start for us.”

WR Jerry Jeudy had a terrific training camp and was expected to make a huge leap from the three touchdowns he scored as a rookie. He got off to a spectacular start in the opener before a high ankle sprain sidelined him for two months. Upon his return, the Broncos' inability to protect Teddy Bridgewater in the shotgun has hampered the deep pass. Jeudy gets open on crossers, but is averaging just 11.4 yards per catch after averaging 16.5 yards as a rookie. He has 377 yards on 33 receptions and hasn't reached the end zone yet.

DE Dre'Mont Jones had a career-high three tackles for loss, including a pair of sacks of Jared Goff, in addition to batting down a pass on fourth down. In one incredible series, he sacked Goff for a 9-yard loss on first down and dumped running back Godwin Igwebuike for a 3-yard loss on second down. After Goff completed a 20-yard pass on third-and-22, Jones batted down Goff's pass on fourth-and-2 from the Lions 33.

"You see him knock the ball down and it’s like, ‘OK, Dre. Chill, brother, there’s plays out here for everybody,'" Chubb said, chuckling.

RB Mike Boone. After a dazzling Denver debut — 54 yards on four touchdowns — in relief of Williams two weeks ago when Gordon was out with shoulder and hip injuries, Boone ended up on the reserve/COVID-19 list. The free agent pickup tore a calf in camp and has played in just three games this season.

— 59 years, 8 months, 2 days: time between the Broncos having two running backs score twice in the same game as they did Sunday when Gordon and Williams each had a pair of TDs. The previous time that happened was against Oakland on Oct. 5, 1962, when Gene Mingo and Al Frazier both scored twice.

Handling the Cincinnati Bengals (7-6) and their offense before hitting the road for a pair of division games at Las Vegas and Los Angeles.