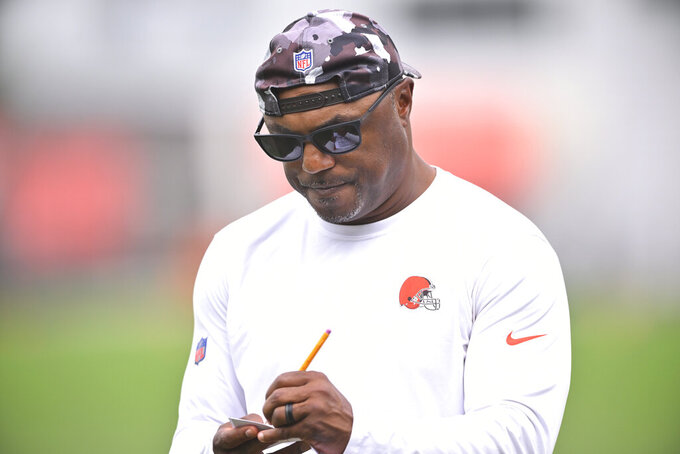 BEREA, Ohio (AP) — Under fire for a dysfunctional and disappointing defense, Browns coordinator Joe Woods opened his news conference Thursday by pointing out his recent lack of sleep.

If things don't improve soon, long work hours and bloodshot eyes will be his least concerns.

Cleveland's defense, loaded with playmakers and one of the NFL's biggest stars in edge rusher Myles Garrett, has woefully underperformed through five games and Woods is feeling the heat from a fan base demanding better and seeing little improvement.

The Browns have been gashed for more than 200 yards rushing in each of the past two games. That would be troubling enough if those performances didn't follow costly communication breakdowns by Cleveland's secondary.

Last week, the Los Angeles Chargers came in as the league's worst rushing team and steamrolled the Browns for 238 yards. The Browns were guilty of blown assignments and missed tackles, which contributed to allowing both a 71-yard run and 99-yard drive.

“It’s frustrating," he said. "I would say I’m disappointed at times, but not discouraged. I do believe we have the talent to be a top-five defense, I’ve said that from the start. It’s my job to get us there.

There have been some legitimate reasons behind Cleveland's defensive demise.

Garrett missed a game following his car crash as both he and end Jadeveon Clowney sat out Cleveland's loss in Atlanta. Middle linebacker and signal-caller Anthony Walker Jr. suffered a season-ending injury two weeks ago and there have been an assortment of injuries across the secondary.

But there's no excuse for leaving receivers open or poor tackling angles or not forcing turnovers.

This isn't new territory for Woods.

A year ago, he was similarly criticized when Cleveland's defense started slowly before turning things around. Perhaps the low point was a 45-7 loss to New England, but the Browns recovered.

Coincidentally, the Patriots are in town this Sunday.

The external noise is deafening. Woods said he's able to block it out.

“I don’t worry about it,” he said of personal pressure. “Like I know it’s a problem and to me in the NFL, it’s fair. You have an opportunity, I feel like the organization provides us with good players on defense at all three levels. Right now we’re not performing well.

"There’s stretches where we’re doing good things, but we’re not consistently playing well for 60 minutes. And it just comes with the territory. But for me having red eyes is about just studying, I’ve always been like that for 31 years coaching. If you worry about it, then it affects your decision-making, it affects your thought process. So I just put my head down and say, how can we get better?”

The Browns stressed fundamentals this week with extra tackling work. Although they don't actually tackle in practice, Cleveland's coaches put the players through drills to perfect their technique.

Cornerback Greg Newsome II feels as long as players handle their responsibility, plays will be made.

“It’s just everybody doing their job and not trying to make any superhero plays," he said. "Stay in your gap, stay wherever you’re supposed to be and the ball will come to you. Don’t try to make a play that somebody else is supposed to make.”

To reinforce his messages, Woods put together a video of missed tackles so his players could see their mistakes in hopes that they won't repeat them.

He's trying methods that have worked in the past, trusting they will again.

“I just believe in what I’m doing. I believe in the coaches that I have around me, just because of the stuff that we’ve done,” he said. "I believe in the players. And I just feel like if we all work together to correct the issues that we’ll get it headed in the right direction.”

Until then, sleep is at a premium.

NOTES: Garrett was given a day to rest. He's still dealing with shoulder and biceps issues from when he flipped his Porsche. ... Clowney (ankle, knee, elbow) didn't practice for the second straight day and was limping when he walked onto the field to watch. ... CB Denzel Ward remains in concussion protocol and seems unlikely to play at this point.