Can Zac Taylor take long-suffering Bengals the next step? 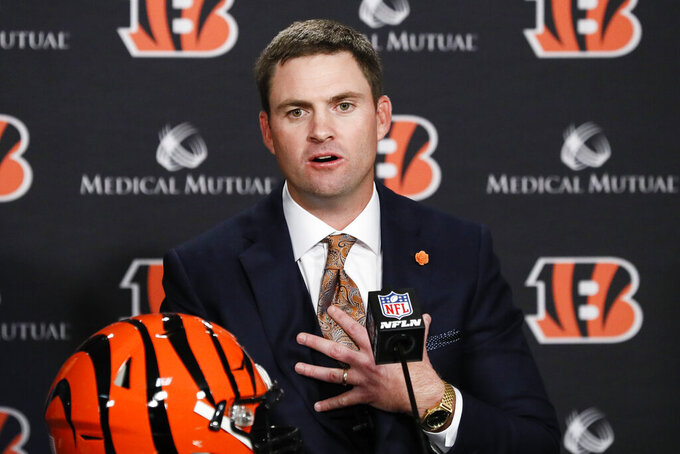 Cincinnati Bengals football head coach Zac Taylor speaks during a news conference, Tuesday, Feb. 5, 2019, in Cincinnati. After 16 years without a playoff win under Marvin Lewis, the Bengals decided to try something different. But they had to wait more than a month before hiring Zac Taylor as their next coach in hopes of ending a long streak of futility. (AP Photo/John Minchillo)

CINCINNATI (AP) — The Cincinnati Bengals liked Zac Taylor the first time they talked to him, but there was one overriding concern when they discussed offering him their head coaching job. He's 35 with only a few games as a coordinator on his NFL resume.

Would it be too much, too soon, to make him a head coach?

"Our big question was: Is he ready for this opportunity?" player personnel director Duke Tobin said.

Taylor convinced them during their two meetings, and the Bengals introduced him as their 10th head coach on Tuesday.

Having answered the Bengals' overriding question, Taylor now gets to deal with another, more persistent question that's confronted all of his predecessors: Can this head coach get the Bengals to a place that none of the others could reach? Or will he run into the same walls?

In Cincinnati, it's always bigger than the head coach. In a league set up to help struggling teams rise quickly, the Bengals have managed only seven winning seasons in the last 28 years, a reflection on ownership.

Quarterback Carson Palmer sensed the built-in walls and asked to be traded after the 2010 season. During his 16 seasons in Cincinnati, coach Marvin Lewis raised the organization to a competitive level but couldn't get it any further.

Quarterbacks and coaches have come and gone, but the futility has endured. Cincinnati's failure to win a playoff game in 28 years matches Washington for the fifth-longest in league history.

He's not only charged with trying to break through those barriers, but also winning back fans who abandoned the team because of its reluctance to make necessary changes.

How's that for a first NFL head coaching job?

"I know this will not be easy," Taylor said.

He has to hire a coaching staff, a job made more difficult by the timing. Under NFL rules, the Bengals couldn't hire him until his team was eliminated from the playoffs. They got to interview him during the Rams' bye weeks.

Taylor hasn't committed to a particular style of defense. He's looking to overhaul an offense that will be on its third coordinator in the last three seasons.

Taylor endorsed quarterback Andy Dalton, saying he fits what he's trying to do with the offense. Taylor intends to call the plays. He'll import features from the Rams' offense to Cincinnati: "I think it would be silly to scrap it, so that will be a big part of what we do."

He spoke repeatedly about establishing a culture.

"It's getting the right people and having high standards and holding people accountable," Taylor said.

Brown finally decided to replace Lewis when attendance fell to the second-lowest level in the NFL. Fans' anger and indifference tipped his hand.

"We had lost some of the faith in our fan base," Brown said Tuesday, his first public comment about the coaching change. "That was clear. That sent a loud message."

So, they decided to go in a very different direction with a young coach who will bring new ideas to a button-down organization.

Taylor wore a three-piece suit to the news conference Tuesday, the first time he's been so buttoned down. The session ended with Taylor posing for photos with Brown, who joked with photographers as they snapped away.

"I keep looking for the flashbulbs," Brown said.