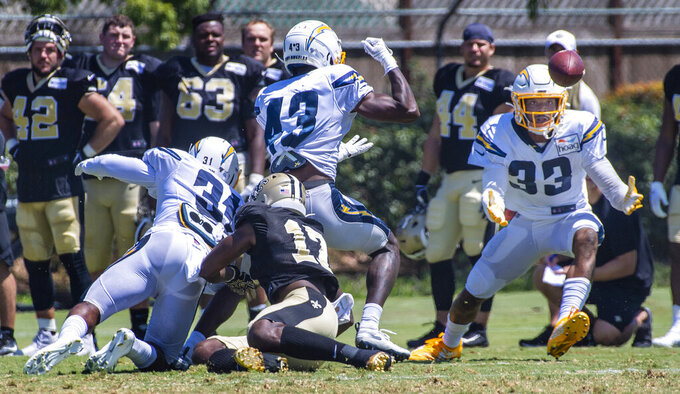 COSTA MESA, Calif. (AP) — The Los Angeles Chargers will likely go into the regular season without one of their top defensive players for the second straight year.

All-Pro safety Derwin James is sidelined due to a foot injury suffered during Thursday's practices with the New Orleans Saints. James has a stress fracture of the fifth metatarsal of his right foot and was wearing a walking boot Friday.

It's unclear how much time James will miss since the treatment remains to be determined. Coach Anthony Lynn was hopeful James wouldn't need surgery, but did not rule it out.

Last year, the Chargers were without defensive end Joey Bosa for the first nine games due to turf toe. If Los Angeles can weather James' absence as well as they did Bosa's, they will be happy. The Chargers were 7-2 without Bosa on their way to making the playoffs for the first time since 2013.

Bosa can tell James the dangers of trying to rush back too soon. Bosa was out for all of training camp and tried to come back for the opener only to aggravate the injury.

"You can take an awkward step and things can happen," he said. "It's tough. To see another left foot injury is a bummer."

James quickly made an impact as a rookie last season. The 17th-overall pick led the team in tackles with 105 along with four interceptions, 3.5 sacks and 13 passes defensed. He had two sacks and an interception in the first three games, becoming the first rookie in a non-strike year since Dallas' Bill Bates in 1983 to accomplish that.

Adrian Phillips will take over at free safety while James is sidelined. Rayshawn Jenkins is also a possibility to move over from strong safety, but with second-round pick Nasir Adderley still trying to work his way back from a hamstring injury, Lynn would rather restrict the changes to one position.

James' versatility will be tough to replace. Defensive coordinator Gus Bradley also lined him up at slot corner, in the box and as a rush end.

"With his production and intangibles we're going to miss him a lot, but we'll be fine. We lost Joey last year and were fine until he came back," Lynn said. "I like the depth we have at safety."

The Chargers are considered to be one of the AFC's favorites but haven't had a smooth training camp. Running back Melvin Gordon is holding out, left tackle Russell Okung is out due to blood clots, and wide receiver Keenan Allen is dealing with an ankle injury.

"What's new? I tell myself every year there are going to be three or four things that are going to happen that you don't expect that we have to overcome," Lynn said. "It doesn't matter how much effort you put into resting and saving guys, it's football. Things are going to happen."