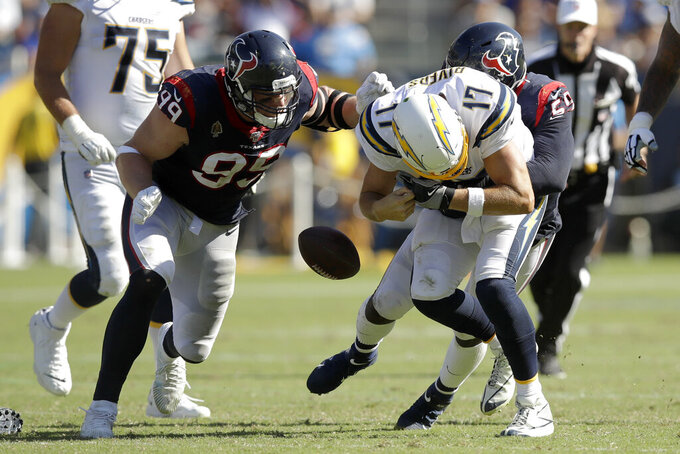 Prosperity is what worries the third-year coach, and his fears proved well founded as the Chargers wasted a double-digit lead in a 27-20 loss to the Houston Texans on Sunday.

The Chargers (1-2) find themselves with a losing record after three games for the fifth consecutive season. What makes this particular swoon galling is the costly self-inflected errors that have littered the losses at Detroit and against Houston.

Left guard Dan Feeney had a holding penalty that erased a touchdown run by Justin Jackson in the second quarter, forcing Los Angeles to settle for a field goal and 10-0 lead. It was the third touchdown wiped out by a penalty in the past two games.

The defense wasn't immune, as safety Rayshawn Jenkins' easy interception of a desperation heave by Deshaun Watson in the third quarter was negated by a face mask penalty against Desmond King II. Watson found Jordan Akins for a 53-yard catch and run touchdown four plays later, and that score would prove to be the difference in the loss.

And when quarterback Philip Rivers had the Chargers driving for a potential tying touchdown in the final minute, completing a pass to Mike Williams at the Texans 7 with 24 seconds remaining, left tackle Trent Scott was flagged for holding. Rivers had his final two pass attempts fall incomplete.

"I will say we just have to be aware, you know, when we get in those situations," Jenkins said. "We do a pretty good job for most of the game. It's just those one or two plays, one or two plays that always finds us."

The normally even-tempered Lynn couldn't help but let his frustration show after the game, with a few harsh words — at least by his standards — and the tone of his voice reflecting his anger and disappointment.

Still, he knows the Chargers have the mindset to overcome adversity, much as they did last season where the same 1-2 start was offset by an 11-2 finish. But Lynn's enthusiasm for putting that resolve into action is tempered by the slew of injuries piling up at key positions.

"I do have an idea how I think this team is going to respond at 1-2, but right now I can't say we're going to do what we did last year," Lynn said. "That's a different team."

Lynn's current group is noticeably decimated at defensive back, where safeties Derwin James and Adrian Phillips and cornerback Trevor Williams are all on injured reserve. Their absence was felt as Watson threw for 351 yards passing and three touchdowns, with 199 yards and two of his scoring throws coming in the second half.

Much of Watson's success came when plays broke down, which, much like the inopportune penalties, linebacker Thomas Davis Sr. blamed on the Chargers' lack of discipline.

"Really good disciplined fundamental teams don't make the mistakes that we're making right now," Davis said. "Fortunate enough for us, it's still early in the season. We still have a chance to right those wrongs. That's something we have to do and we have to do it quickly."

Said Jenkins: "We could very well be 3-0 right now. It's not like these teams are just coming in here and doing whatever to us. We're beating ourselves at the end of the game.

"Just figure out some way, somehow to just take that part out of our game and we're good."