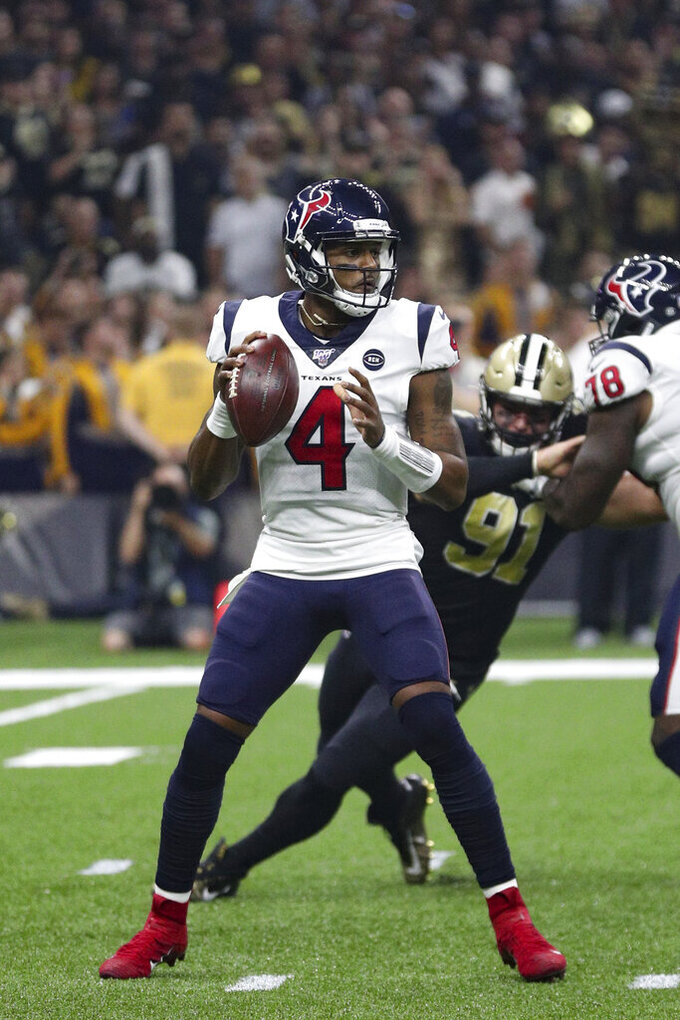 Houston Texans quarterback Deshaun Watson (4) looks downfield for a receiver in an NFL game against the New Orleans Saints, Monday, Sept. 9, 2019, in New Orleans. The Saints defeated the Texans 30-28. (Margaret Bowles via AP)

CARSON, Calif. (AP) — In a week in which one of his 2004 draft classmates suffered a season-ending elbow injury and the other was benched, Philip Rivers continues to be old reliable for the Los Angeles Chargers.

Rivers will make his 209th consecutive start on Sunday when the Chargers host the Houston Texans in a key early season matchup. That ties him with Eli Manning for the second-longest QB starting streak in NFL history.

Manning, who was the No. 1 pick in the 2004 draft, was benched this week by the Giants for rookie Daniel Jones and Steelers quarterback Ben Roethlisberger, the No. 11 overall selection, will miss the rest of the season with an elbow injury.

"I don't think you ever take it for granted, no question. I think even more-so now, you just realize that it doesn't last forever," Rivers said.

Longevity though is not what Rivers is focusing on this week. It is trying to bounce back from a disappointing 13-10 loss at Detroit where the Chargers' hope for a comeback ended when he threw an interception in the end zone late in the fourth quarter.

The pick capped a day that saw the Chargers have two touchdowns called back because of penalties, two missed field goals and a turnover in the red zone. The loss leaves LA at 1-1 and facing a fellow playoff participant from last season.

"I think that we've shown the ability to bounce back over the years when we've lost some tough ones," Rivers said. "Usually, you never take any satisfaction in losing, obviously, but most of our losses are going to be tough ones — at least I hope."

Rivers is very much a pocket passer who is not fleet of foot, Deshaun Watson is the opposite. The third-year quarterback is two touchdown passes away from 50 in his career and needs 35 rushing yards to become the seventh QB in NFL history with 900 yards or more in his first 26 games.

While the Chargers are coming off a close loss, the Texans survived a missed 2-point conversion to beat Jacksonville 13-12.

"Everyone is making sure that as far as I go, the offense goes and the whole team goes," Watson said. "It just kind of grows on itself and the more I play, the more reps I get, the more games I start as a quarterback here, the more it grows."

Here is what else to watch for during Sunday's game:

There hasn't been any decline in the Chargers' running game despite Melvin Gordon's holdout. Austin Ekeler and Justin Jackson have combined to average 5.7 yards per carry.

Ekeler leads the AFC in scrimmage yards (287) and is tied for sixth in the league in offensive touches (46). However, he did fumble near the goal line in last Sunday's 13-10 loss to Detroit.

Jackson has been a nice change-of-pace back with seven of his 13 carries going for 10 yards or more.

Houston outside linebacker Whitney Mercilus was the AFC Defensive Player of the Week this week after he had two sacks, forced two fumbles and had two quarterback hits in a win over the Jaguars last Sunday. His second strip sack was recovered by J.J. Watt and the Texans scored their only touchdown of the game four plays later. Mercilus is the only player in the NFL to force more than one fumble this season.

It was his second straight big game this season after he had a sack, an interception, five tackles, including one for a loss and a quarterback hit in Houston's opener.

"Whitney has been a very productive player for us over the years," coach Bill O'Brien said. "He's been a guy that really is just known for doing his job. He just does a good job of setting the edge in the running game and then rushing the passer."

Running backs Carlos Hyde and Duke Johnson have filled in nicely in the first two games after Lamar Miller, who was Houston's featured back for the past three seasons, sustained a season-ending knee injury in a preseason game. The duo has helped the Texans average 153 yards rushing a game, which ranks fifth in the NFL. Hyde has carried a bigger load than Johnson so far and he is fifth in the league with 173 yards rushing.

Their success is impressive considering that neither player started camp with the team. Johnson came to Houston in a trade with Cleveland on Aug. 9 and Hyde joined the Texans on Aug. 31 in a deal with Kansas City.

The game will feature three of the top pass rushers in the AFC. Houston's J.J. Watt is still looking for his first sack this season and has never taken down Rivers.

Los Angeles' Joey Bosa and Melvin Ingram have combined for two sacks, both coming in the opener against Indianapolis.

The Chargers are hoping to get placekicker Michael Badgley back after he has missed two games because of a groin injury. Ty Long has handled both kicking and punting duties, but missed a pair of field-goal attempts last week.

The Texans have brought back punter Bryan Anger after Trevor Daniel struggled.