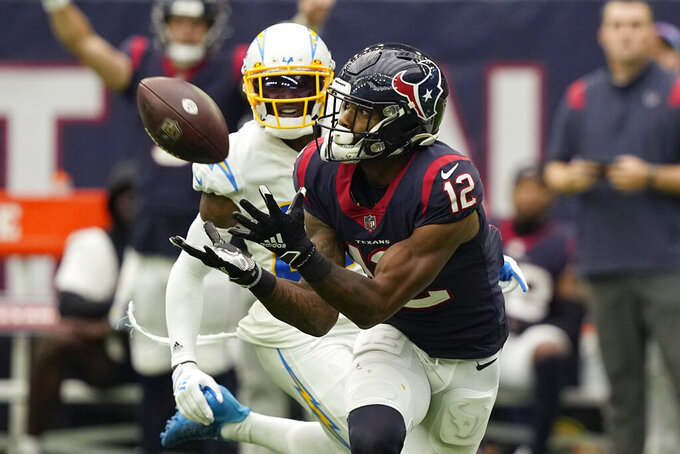 Brandon Staley continues to have confidence in J.C. Jackson despite his continuing struggles.

The Los Angeles Chargers coach said on Wednesday that Jackson would be the starting cornerback on Sunday against the Seattle Seahawks.

Jackson was benched during Monday night’s 19-16 overtime victory over the Denver Broncos. He was out of position when Russell Wilson found Greg Dulcich wide open for a 39-yard touchdown late in the first quarter.

“J.C. had a tough night the other night, but we’re going to make sure that we stay patient with him because he has all of the tools that we’re looking for,” Staley said.

“We expect them to be out there this week, playing his brand of ball. I think he will learn a lot from what happened the other night — what he needs to do with his game and what we need to do as coaches. That’s as much on me as anybody.”

Jackson, who signed a five-year, $82.5 million contract with the Chargers after New England did not place the franchise tag on him, said on Wednesday that the breakdown in coverage was a mental error. It was the second straight week Jackson allowed a touchdown and the third this season.

The biggest struggle for Jackson has been adjusting to playing mostly zone coverage after he played man coverage more than half the time with the Patriots.

Staley, though, thinks Jackson missing nearly four weeks because of ankle surgery late in the preseason and trying to rush back has put him behind more than the scheme.

“Like I told you guys, he came here to do the job that he’s doing, but I think it’s just us getting him in as good of rhythm as possible,” Staley said.

“I think it’s the practice time, the meeting time, the consistency of that. As you guys know, it was disrupted at the beginning of the season, and, I think, has caused a setback, in terms of his development within our team and getting him playing his game within our team.”

Jackson’s 25 interceptions since the start of the 2018 season are the most in the league, but he is still looking for his first with the Chargers. It is the first time in his five-year career he hasn’t had an interception in the first four games he has played in a season.

Last year, Jackson made the Pro Bowl after leading the league with 23 passes defended and picking off eight passes, which ranked second.

Jackson and the Chargers’ secondary will be facing a Seattle passing attack among the league’s best. Geno Smith leads the league in completion rate (73.4%).

“Tyler’s been such an outstanding player for so long. He’s a clutch player, a guy that can move around. He can make a lot of big plays in a lot of different places,” Staley said.

“Metcalf is one of the premier receivers in the game. His size and speed are rare. He can access the top shelf of the coverage. He presents a lot of challenges in isolation. Run after catch; if he catches it, he’s a tough guy to bring down because he’s so big. Then, he has enough gas to take it out the back door and finish it. A very big-time wide-receiver tandem.”

The Chargers (4-2) are tied with Kansas City atop the AFC West and are seeking their first four-game winning streak since the end of the 2020 season. Seattle (3-3) has won two of its past three.