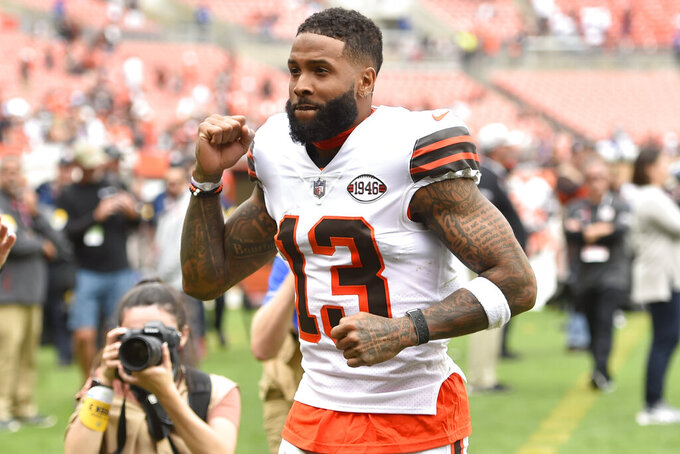 FILE - Cleveland Browns wide receiver Odell Beckham Jr. walks on the field after an NFL football game against the Chicago Bears on Sept. 26, 2021, in Cleveland. A disappointment and distraction before being released by the Browns, Beckham cleared NFL waivers without being claimed Tuesday, Nov. 9, 2021, and can now sign as a free agent with any team. (AP Photo/David Richard, File)

Then again, he didn't say they weren't.

Beckham became a free agent Tuesday after the wide receiver's acrimonious split with the Browns, and the Chiefs — with star quarterback Patrick Mahomes — are among the destinations that he's rumored to be considering.

“That's (Brett) Veach's area. He looks at everybody," Reid said of Kansas City's aggressive general manager. “You guys know how he does it. I've been in a bunker trying to get my work done. I haven't really talked to him.”

The pairing would make sense, though.

Beckham reportedly wants to spend the rest of the season with a contender, and the Chiefs have been to three straight conference title games and are trending up in the AFC West after a lousy start. Yet their offense has continued to struggle to live up to the lofty standards it has set over the years, and Beckham could provide the jolt that it needs.

The Chiefs already have made a similar move this season, signing Josh Gordon when he was cleared by the NFL to return from his suspension. Gordon has yet to make much of an impact since making his debut in Week 5, though, and the Chiefs have struggled with Tyreek Hill and Travis Kelce their only real downfield threats.

Mahomes threw for just 166 yards in last week's win over Green Bay, the fewest of his career for a game he finished.

“I mean, he's a really good football player who's done a lot of great things in this league,” Mahomes said of Beckham, “but I'll leave that stuff up to Veach. He does a great job bringing in great players. He's always looking to make the team better.”

The often-controversial Beckham had just 17 catches for 232 yards without a touchdown in six games for the Browns this season. As his relationship with the organization soured, Beckham asked for a trade that never materialized, and Cleveland ultimately let him go despite owing him $4.25 million on his renegotiated contract.

The Chiefs have become a popular landing spot for reclamation projects.

Two years ago, they added depth to their run game by signing LeSean McCoy and their defense with pass rusher Terrell Suggs and cornerback Morris Clairborne, and the trio wound up getting a Super Bowl ring out of it. Last year, they grabbed Le'Veon Bell, and he made a couple of starts while helping Kansas City to a second straight title game.

Asked why that's been the case, Reid replied: “I mean, we've been doing OK.”

“Listen,” he said, “this is a great city, great venue to play here. If you're a player in this league I'd think it's a pretty good situation. We have some players that are younger on the team that are pretty good. We do get linked (to guys) — you know that Brett is always going to keep his eyes and ears open. That's what he does. So you're going to get tied into certain guys, right or wrong. That's healthy, too. That's what you want. You don't want to be sitting around.”

That doesn't mean Reid has been making any sales pitches to Beckham or anyone else.

Or that Mahomes has, either.

“They haven't reached out to me or anything like that,” Mahomes said with a laugh. “Obviously I know that he's a talented player and everything like that. But all you can do is focus on the day at hand, this season, and for me, it's focusing on this practice we have, and everything else will work out.”

NOTES: RB Clyde Edwards-Helaire (sprained knee ligament) practiced Wednesday for the first time since getting hurt Oct. 10 against Buffalo. That begins a three-week window for Edwards-Helaire to be activated from injured reserve. ... OL Kyle Long (knee fracture) also returned to practice after he was activated from the PUP list Tuesday. “I think it's important right now that he gets back in the swing,” Reid said, “gets a few opportunities to move around doing football work." ... DT Chris Jones and LB Dorian O'Daniel were excused from Wednesday's practice for personal reasons. RTs Mike Remmers (knee) and Lucas Niang (ribs) and CB L'Jarius Sneed (ankle) also did not practice.