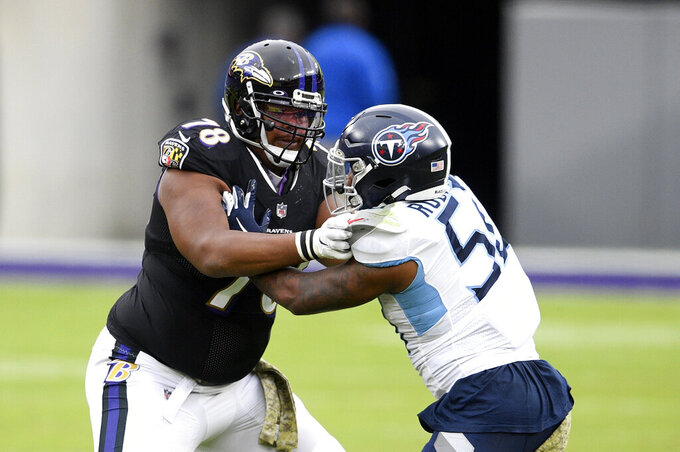 FILE - In this Nov. 22, 2020, file photo, Baltimore Ravens offensive tackle Orlando Brown (78) works against Tennessee Titans linebacker Derick Roberson (50) during the second half of an NFL football game in Baltimore. The Kansas City Chiefs plugged the biggest hole remaining on their AFC champion roster Friday, April 23, 2021, when they acquired two-time Pro Bowl offensive tackle Brown from the Ravens for a package of draft picks, including the No. 31 overall selection this year. (AP Photo/Nick Wass, File)

KANSAS CITY, Mo. (AP) — Just about everyone knew the Kansas City Chiefs were going to address their offensive line through the NFL draft.

Nobody quite expected them to do it a week before it even started.

The Chiefs plugged the biggest hole on their AFC champion roster Friday when they acquired two-time Pro Bowl offensive tackle Orlando Brown from the Ravens for a package of draft picks, including the No. 31 overall selection this year.

Both teams announced the trade, which will not become complete until Brown passes a physical.

“Teams continually tweak and update and revise that board, knowing where they can attack it,” Chiefs general manager Brett Veach said during a Zoom call earlier Friday. “I think that mid-two-to-early-three area is going to be a hot zone.”

Turns out that Day 2 depth was one of the reasons Veach was willing to let go of the No. 31 pick.

The Ravens had been expected to trade Brown since late January, when he took to social media to emphatically state that he was a left tackle rather than right tackle, where Baltimore wanted him to play going forward. And while the trade gives the Ravens two first-round picks, they likely will need to use one of them on a replacement on the right side.

The biggest surprise, though, may have been the trade partner. Baltimore essentially sent one of the league's best players at one of the game's premier positions to their biggest barricade toward making it back to the Super Bowl.

“There’s been certainly dialogue with various teams and we have a couple things on our radar," Veach said about four hours before the trade, “but nothing there we’re ready to move on in any direction. But we’re always going to continue to have dialogue with teams and make sure we have all the information, and we can assess whether this move would be a better alternative than staying put and either moving up or moving down."

The Chiefs have spent the offseason rebuilding an offensive line that was decimated by opt-outs and injuries by the end of last season, when they were dominated up front by the Tampa Bay Buccaneers in a Super Bowl rout. But most of the work in free agency had been along the interior of the line, leaving both offensive tackle jobs up for grabs.

The Chiefs released left tackle Eric Fisher and right tackle Mitchell Schwartz, both of whom had surgery for season-ending injuries, to save space under the salary cap. And that left many to assume they would draft an offensive tackle at No. 31.

Despite a draft deep at the position, the Chiefs decided to trade that selection among others for a sure thing.

The 24-year-old Brown, a third-round pick of the Ravens in 2018, has started 42 games and appeared in all 16 each of the past three seasons. He played on the right side his first two seasons but moved to the left following an injury to Ronnie Stanley midway through last season, and did not allow a sack in about 700 snaps at that position.

The acquisition turned out to be an aggressive backup plan after the Chiefs made a strong offer to Trent Williams in free agency. Williams chose to return to the San Francisco 49ers instead of signing with Kansas City.

Either way, the Chiefs were poised to enter the season with an entirely new offensive line protecting Patrick Mahomes.

They signed standout Patriots guard Joe Thuney in free agency, lured former All-Pro Kyle Long — who could play offensive guard or tackle —out of an injury-induced retirement and signed Austin Blythe to take over at center.

They also plan to have third-round pick Lucas Niang, who opted out of his rookie season, and veteran Laurent Duvernay-Tardif, who likewise opted out so the trained physician could help COVID-19 patients in his native Canada.

“As we learned last year, you’re going to have situations where depth comes into play,” Veach said, "and obviously we’ll have opportunities to add offensive linemen this draft class, but just like we ran into issues up front on the offensive line, we can run into issues on the defensive line this year, or at corner or receiver. So, there’s a lot of stress to always add talent and make sure that the next-man-up philosophy is in place and we have the talent to do that.”