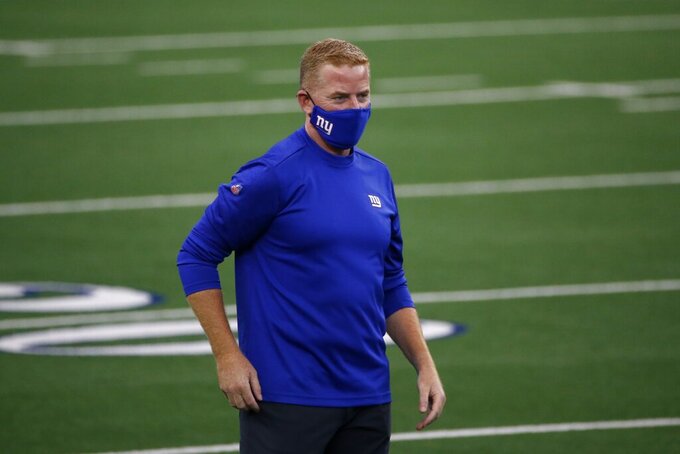 New York Giants offensive coordinator Jason Garrett watches workouts before an NFL football game against the Dallas Cowboys in Arlington, Texas, Sunday, Oct. 11, 2020. The game marks the first time Garrett has returned to play against the team he was the head coach of last season. (AP Photo/Michael Ainsworth)

The Kansas City Chiefs are joining with the Missouri State High School Activities Association and the NFL Foundation to launch a state chapter of InsideOut, a national initiative that is designed to empower and equip school communities to implement purpose-based athletics.

Since its inception in 2015, the InsideOut program has provided training for educational leaders, athletic administrators, coaches and others in the community. It supports schools in redefining and reframing sports as a platform for youth development.

“Social-emotional and character development is a critical approach to ensuring young athletes develop the important life skills that will stay with them long after organized sports are done: empathy, determination, courage, self-esteem, dignity and more,” said former Chiefs linebacker Gary Spani, now their director of the club’s community engagement team.

The importance of that has been underscored as school systems across the country deal with COVID-19, which has forced millions of students into virtual learning and impacted a variety of sports programs.

“Returning the focus on the purpose of high school sports and activities to preparing students for life after high school through the avenue of sports and activities will have a tremendous effect on the social-emotional and character development of students across Missouri,” said Dr. Kerwin Urhahn, the executive director of the Missouri State High School Athletic Association. “As we continue to deal with the many challenges before us, this initiative is timely and critical at this point in our society.”

New York Giants offensive coordinator Jason Garrett experienced something very rare on Thanksgiving. He wasn’t working a game for the first time since 2005.

Garrett had spent the previous 13 years seasons as coach with the Dallas Cowboys, the last decade as their coach. The Cowboys traditionally play on Thanksgiving.

Before arriving in Dallas, he had been the Dolphins’ quarterbacks coach. In 2006, Miami had a Thanksgiving game against the Detroit Lions, the other team that always plays on turkey day.

All Garrett had to do Thursday was go to practice with the Giants to prepare for Sunday’s game in Cincinnati.

“You know, when I was playing with the Cowboys in the 90s, we played on Thanksgiving every year back then as well,” Garrett said Friday. “So I’ve been really fortunate to play on Thanksgiving a lot throughout my life. And those are great experiences. But it was a little bit different yesterday, a little bit more of a traditional Thanksgiving. And that’s pretty good, too.”

Miami Dolphins receiver Antonio Callaway is mounting an NFL comeback and says he has learned from past mistakes.

Drug issues have slowed Callaway’s career since college at Florida, where he had other brushes with the law. He missed the first half of this season serving a drug-related suspension.

Now, Callaway said he meets with coaches before and after practice and has a structured schedule that allows little free time. He was asked this week what he would tell his 17-year-old self.

“I’d say, why did I make the choices I’ve made?” he said. “But you live and you learn. Lessons learned.”

Callaway caught 43 passes for 586 yards and five touchdowns as a rookie for Cleveland in 2018. He has nine receptions since, including his first for Miami last week.

Sunday marks a homecoming of sorts for Chicago’s Jimmy Graham as the Bears visit Green Bay, where the veteran tight end spent the last two seasons.

Graham wasn’t particularly productive in his brief stint with the Packers. His five touchdown catches with Chicago this season match his two-year total with Green Bay.

But his former teammates say those numbers don’t reflect Graham’s contributions with the Packers. They say he was a great leader and locker-room presence.

“Jimmy’s like a pit bull because everybody’s got this perception of how the guy is: little rough tough exterior, not the most approachable maybe, not knowing too much about him," Packers wide receiver Davante Adams said. "And I own a pit bull, so just to let you know how I feel about them. But once you get to know them, they’re one of the most loyal creatures in the world and will do anything for you.

"Like I said, they’ll be there for you through thick and thin. So that’s kind of the way I think of Jimmy.”