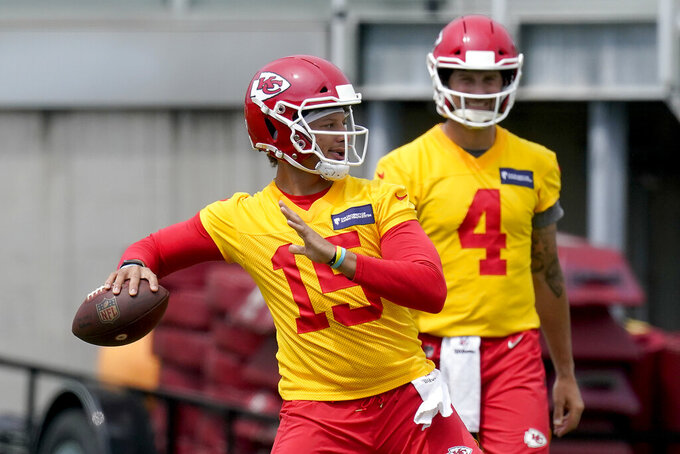 KANSAS CITY, Mo. (AP) — The Chiefs' Patrick Mahomes is teaming with USA Football to host three youth football coaching clinics across Missouri this summer while his 15 and the Mahomies Foundation has provided grants to 15 youth football leagues.

The collaboration between the three-time Pro Bowl quarterback and USA Football was announced Monday.

Webb City (Missouri) High School coach John Roderique, who has led the Cardinals to a state-record 12 championships, and longtime Rockwood (Missouri) Summit High School coach Mike Bellars will lead the clinics. Their purpose is to prepare other coaches to teach youth athletes based on their age, skill level and the type of football games they are playing.

Along with the clinics, the 15 and the Mahomies Foundation announced that $2,000 operating grants will be distributed to 15 area youth leagues across the region. They will be awarded through an online grant application.

“Smart coaching can make a lasting and positive impact on kids and their sports development,” said Mahomes, who has led the Chiefs to three consecutive AFC tile games and back-to-back Super Bowl appearances. "I’m happy to partner with USA Football to support healthy football practices for coaches and youth athletes across the KC region.”

The collaboration is another example of the investment that Mahomes and his wife, Brittany Matthews, are making in their adopted community. Mahomes recently purchased a minority interest in the Kansas City Royals while Matthews, who played professional soccer in Iceland, is part owner of the Kansas City franchise in the National Women's Soccer League.

Meanwhile, the 15 and the Mahomies Foundation have donated hundreds of thousands of dollars to local causes. That includes funding the renovation of Martin Luther King Jr. Park, not far from Arrowhead Stadium, which will feature an all-inclusive play site along with opportunities to learn about and commemorate King's work.

“Patrick’s commitment to kids through his 15 and the Mahomies Foundation is immense and uncommon,” USA Football chief executive Scott Hallenbeck said. “We value Patrick’s friendship and love of the game to deliver best-in-class coach training and grants to help elevate youth football programs throughout Greater Kansas City."

Mahomes will join the Chiefs' other quarterbacks, rookies and select veterans in reporting to training camp July 23 at Missouri Western State University in St. Joseph. The rest of the team reports July 28, with the first full-squad workout the following day open to the public for the first time since the 2019 preseason.

The Chiefs open the regular season Sept. 12 against the Cleveland Browns.