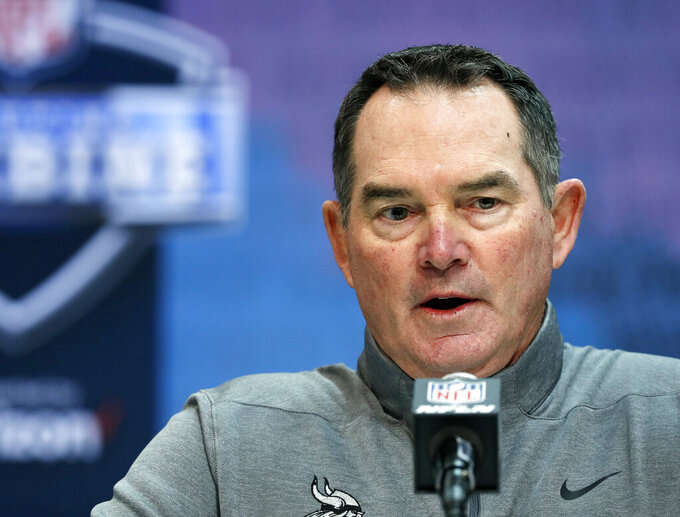 FILE - In this Feb. 26, 2020, file photo, Minnesota Vikings head coach Mike Zimmer speaks during a news conference at the NFL football scouting combine in Indianapolis. Zimmer and co-defensive coordinator Andre Patterson have worked together for four different teams, a football friendship of white and Black coaches renewed when Zimmer was hired by the Vikings and put Patterson on his staff. As Vikings players initiated deep discussions about race and justice on Thursday, Aug. 27, 2020, Zimmer was startled to hear Patterson reveal his own frightening history of being pulled over by police for no apparent infraction. (AP Photo/Charlie Neibergall, File)

MINNEAPOLIS (AP) — Mike Zimmer and Andre Patterson have worked together for four different teams, a football friendship first struck 32 years ago and renewed in 2014 with Zimmer's inclusion of Patterson on his staff with the Minnesota Vikings.

There they were at team headquarters on Thursday, as players held a deep discussion about race, justice and humanity and their roles in societal betterment, when Zimmer was startled by Patterson's revelation of a frightening chapter from his past.

“This is the first time I’ve heard it,” Zimmer said. “Andre told me he’d been pulled over three times and had guns pulled on him. He wasn’t doing anything. He wasn’t speeding. His blinker wasn’t wrong. He wasn’t changing lanes, they let him go each time. That’s not right.”

One of the players, whom Zimmer did not identify, also shared a similar story.

“That kind of opens your eyes about some things that you don’t know about, because you haven’t lived it,” Zimmer said, joined by Patterson on a video conference call with reporters after the Vikings ultimately practiced as scheduled in the afternoon following an emotional two-hour meeting initiated by the players that eventually included the coaches.

Nine NFL teams chose not to practice, the NBA and NHL paused their playoff schedule and seven Major League Baseball games were postponed on a powerful, unprecedented day in sports as part of the ongoing response to the police shooting four days earlier of Jacob Blake, a Black man in Kenosha, Wisconsin.

The teams that did take the field did not do so lightly. The Vikings spent collective time processing their feelings, sharing their perspectives and planning for action in the name of social justice.

“We want to make change, and us missing practice one day is a 24-hour shock value,” Zimmer said, “and we feel like we can do more things with our football team and with our voices as we continue to move forward.”

The organization created a social justice committee for that three years ago, which includes Patterson and more than a half-dozen players including Eric Kendricks, the reserved-by-nature sixth-year linebacker who was an All-Pro last season and has become increasingly outspoken on these issues. The May 25 death of George Floyd, a Black man in Minneapolis police custody, accelerated and intensified the conversations among the Vikings.

“I feel like there’s a lot of optimism, optimism in the sense that we are starting to realize as athletes, as teammates, the kind of impact we have, and whether it’s as a team or individually, what direction we’re willing to take things and fight for. Fight for what’s right,” said Kendricks, who appeared on a separate Zoom session wearing a T-shirt calling for the arrest of the police who fatally shot Breonna Taylor, a Black woman in Louisville, Kentucky.

Kendricks is Black, from Fresno, California. Quarterback Kirk Cousins is white, from Holland, Michigan. They're the epitome of the diverse upbringings found on an NFL team.

“I think that’s most of what the last few months has been about: being a good listener, being a good question-asker,” Cousins said. “I don’t know of a more constructive way to build a team and a locker room and team chemistry than the time we spent this morning and the conversation we had. I think there was tremendous value in it.”

For Zimmer and Patterson, too.

“The young people of today are a little bit more aware and evolved than maybe I was at that time in my 20s, you know, or my teens. They’re more eager to get out there and let their voices be heard and try to get their hands dirty to try to make change happen. Those are the things that give me a positive frame of mind, because I see them being different," Patterson said. "But I also think we have to be able to share our experiences with them so they understand, yeah, these things are bad, yeah they should never happen, but the bottom line is you have to find a way to keep going on and keep living life, because the world isn’t going to stop for any of us."

Zimmer and Patterson are both in their 60s, expert teachers of defense who first met at Weber State in Utah in 1988. They were at Washington State and with the Dallas Cowboys after that. When Zimmer got his first chance to be a head coach with the Vikings, he wanted Patterson to be his defensive line coach. This year, he promoted him to co-defensive coordinator.

Were it not for football, they never would have met. Zimmer is white, raised in Lockport, Illinois. Patterson is Black, from Richmond, California.

“We're best of friends off the field. We're best of friends in the locker room,” Zimmer said, “and I feel like our team really represents a lot of myself and Andre, the fact that we all come from different areas, and we’re all trying to get along with one another and respect each other and treat people right and come together as a football team.”

Said Patterson: “I would take a bullet for Zim. There’s no ifs, ands or buts about it. That’s how close he is to me. That’s how much I care about him.”

Said Zimmer: "We’re not going to let you take a bullet.”