Column: Brett Favre would be wise to pay up and shut up 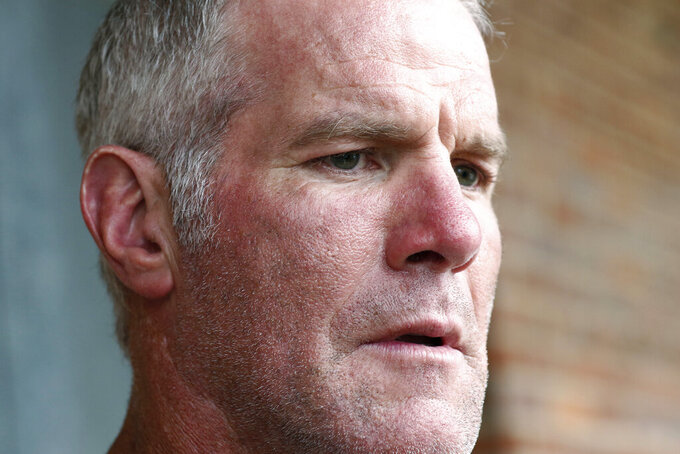 FILE - In this Oct. 17, 2018, file photo, former NFL quarterback Brett Favre speaks with reporters in Jackson, Miss. Favre has repaid $600,000 in state welfare money he accepted for speeches where he didn't appear, but the state attorney general could sue Favre if he doesn’t pay interest owed on the amount, the Mississippi auditor said Wednesday, Oct. 27, 2021. (AP Photo/Rogelio V. Solis, File)

By now we’ve gotten used to the idea that athletes may not be as accountable off the field as they are forced to be on it.

The latest case in point would be in Mississippi, where favorite son Brett Favre engaged in a Twitter feud with the state auditor over more than $1 million paid out to the former quarterback that should have gone to the poor and hungry in the state.

Frankly, it’s hard to understand what Favre was thinking when he accepted $1.1 million in federal money given to a nonprofit organization — money that was originally intended to help needy people in one of the poorest states in the U.S.

The payment was ostensibly for a radio commercial and a few speeches that Favre never made, according to Mississippi Auditor Shad White.

Favre finally repaid the money last month, but only after being publicly prodded by White. But White also wants $228,000 in interest for the three years Favre had the money in his bank account, and that was apparently enough to send the former quarterback into a Twitter fit last week to complain about it all.

He blamed White and he blamed the media. For some reason, he never blamed himself.

Why shouldn’t he get $1.1 million for doing nothing? He’s Brett Favre, after all.

“Prioritizing sensational headlines over seeking truth is doing a disservice to the people of our great state who deserve answers and a resolution,” Favre said in a series of tweets that accused White of never meeting with him to get all his answers about the money.

Unfortunately, Favre never let on just what those answers were, other than he did some radio commercials on behalf of poor people.

So it was left to White to fill in the blanks.

“I am not going to hide how much you were paid, why you were paid, or conduct back room meetings to make this go away,” he tweeted back at Favre. “To suggest I have only communicated this to you via the media is wrong. I’m doing my job — that’s it. You can continue to use your megaphone as a celebrity to drown out the facts, but it will not change the facts.”

The facts are that the money was part of $77 million in federal funds designated for needy families that the former executive director of the Mississippi Department of Human Services gave to two nonprofits. Favre repaid $500,000 and then paid the remainder in October — but only after White said the Hall of Famer and others who received money would face civil charges if they didn’t give it back.

The controversy probably isn’t going to put much of a dent in the popularity of the former Green Bay Packers quarterback in Mississippi, where he was born and still lives. He’s the biggest sports name in the state and a little brouhaha over misspent welfare money isn’t going to change that.

White said there was no indication that Favre knew the money was originally intended to help poor people in his state and faces no criminal liability. Favre is one of more than 10 people who have been asked to give back millions that were part of an embezzlement scheme that has led to charges against five people, including the state’s former Department of Human Services director.

Still, you have to wonder how Favre came to believe $1.1 million was a fair price to record a radio ad. To put it into context, Favre recently offered a 10-minute Zoom call to benefit hurricane victims through his charity, favre4hope, and the top bid was just $2,450.

Whatever, for Favre to complain on Twitter that he is some sort of a victim in all this is laughable. The bottom line is he took $1.1 million in federal welfare money, did little to nothing for it and now must be held accountable.

If he’s got some real answers, surely the people of Mississippi would love to hear them.

If not, here’s some advice: Stop complaining, pay the $228,000 in interest and hope no one ever brings the whole unseemly mess up again.