Column: Hope springs eternal as a sports collection is shed 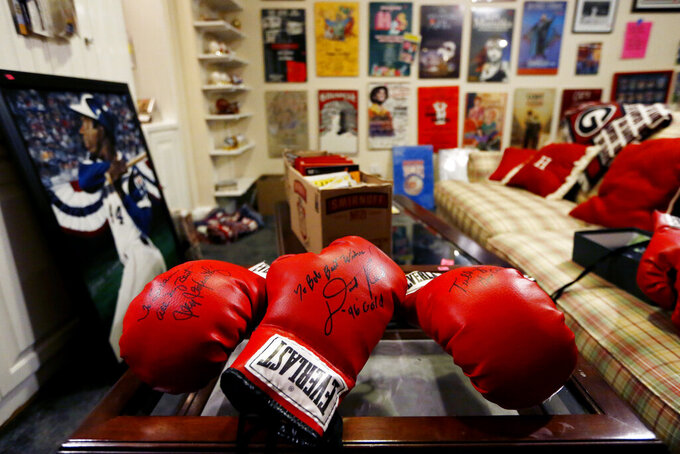 Autographed boxing gloves are seen in Bob Hope's basement, which holds his sports memorabilia collection for sale, Friday, Aug. 23, 2019, in Stone Mountain, Ga. With a name that made him easy to remember, Hope built a behind-the-scenes career as a hype man, a PR wizard who worked for various sports teams around Atlanta before launching his own firm and setting off on a quixotic, around-the-world quest to make friends and move the needle. (AP Photo/Andrea Smith)

STONE MOUNTAIN, Ga. (AP) — He ambles through the sprawling house, through the trove of treasures from a most interesting life, taking one last look at the autographed baseballs and signed jerseys, boxing gloves and football helmets, Olympic pins and an oil painting of Hank Aaron.

Every memento comes with a story.

Like Herschel Walker's framed No. 34 jersey from his final season with the Philadelphia Eagles.

"That's significant to me and a few people because ... there's only one (season) in the history of the NFL when a player has run 90 yards for a touchdown, caught a 90-yard touchdown pass and run a kickoff back 90 yards or more," he says. "A lot of people don't even know he played for the Eagles."

With a name that made him easy to remember, Bob Hope built a behind-the-scenes career as a hype man, a public-relations wizard who worked for various sports teams around Atlanta before launching his own firm and setting off on a quixotic, around-the-world quest to make friends and move the needle.

He would take on pretty much any project that came his way, as long as it included a paycheck and a challenge. He worked with entrenched entities such as the Olympics. He took the lead on dreamy ideas such as the Silver Bullets, an all-female baseball team that barnstormed the country in the mid-1990s, looking to break down barriers and capitalize on the popularity of "A League of Their Own."

"If you're going to fail, fail big," Hope likes to say. "If I'm going to strike out, I want it to be at the World Series."

There have been more hits than misses, to be sure. He hobnobbed with Muhammad Ali, persuaded Tubby Smith to step into a boxing ring with Evander Holyfield for a charity bout, counts Aaron and Ted Turner among his closest friends.

Susan, his wife of 46 years, died two years ago after a fierce fight with cancer. She was the one who curated the vast collection of sports memorabilia that her husband accumulated along the way, transforming the basement of their suburban, three-story home near Stone Mountain into a virtual museum.

"An organized hoarder," Hope calls his late wife, breaking into a wistful smile.

He misses Susan greatly, but knows she's not coming back.

In a matter of weeks, he put his house on the market and moved into a two-bedroom apartment in nearby Decatur. He took only what he needed to furnish his much-smaller digs, along with a handful of his most treasured items. Everything else went up for sale this weekend, including that staggering accumulation of memorabilia.

"It's an interesting journey because you have to think about what's really important to you," Hope says. "You sort of realize that you want to pick a few things that are symbolic of the others. At the same time, you neither have the space nor do you really have the need to hang onto all of it. What are you going to do with it?"

Downsizing is a quandary many of us will face if we're lucky enough to get to a point where we have a lot more years behind us than in front of us. Maybe not to the extent that Hope is going through, but jarring just the same. Age is a cruel, unrelenting foe. One of its most wrenching blows is forcing us to shed the life we built.

"You're making a decision to let part of your life go," said Randall Hudson, who coordinated the estate sale for Crystal Clear Advisors. "It's a mourning process. But it's also cleansing and refreshing, because sometimes things can be a burden. You're starting anew."

Hope, forever the PR guy, certainly spins it that way. He scoffs at the notion that old age means trading in his dreams for his regrets.

"It makes you think about your life and what your life really is," he says. "You realize there are chapters in it. All of this stuff represents the longest chapter, the many years we were married and the things we did. Now, when you move on, you want to think, 'I'm not going to do anything with it. Put it in the hands of somebody who will really enjoy it.'"

Hudson said Hope's collection was one of the largest his company has handled.

"A lot of this stuff is so special to him and his wife," Hudson said. "You only have a one-time chance to get something signed at a certain moment in time."

Hudson singles out some of the rare items. For instance, Hope had one of just a handful of commemorative baseball and card sets given to guests of Aaron's 80th birthday party.

There also are items that prompt a double take. A helmet that appears to be from the short-lived ESPN series, "Playmakers." A framed jersey autographed by the Geelong Cats, a team in the Australian Football League. A promotional poster for the New York Cover Girls, a historic women's basketball team.

"When we did the Silver Bullets, a lot of people would give me different things about women in sports," Hope explains.

After disappearing for a few seconds into another room, Hope emerges with a pair of statues: Håkon and Kristin, the mascots of the 1994 Lillehammer Olympics. Thankfully, there is no sign of Izzy, the atrocious symbol of the '96 Atlanta Games, to muck up the sale.

As he moves through the basement, knowing he is looking at most of these items for the last time, Hope looks a bit rueful.

But not for long.

"How I can possibly walk away?" he muses. "Now it goes into people's hands who will enjoy it. They'll have a special place for it. It's sort of continuation of your life. It's a continuation of the joy you got out of collecting it."

If downsizing day arrives for you or a loved one, remember one word.