Column: Raiders have their coach after Bisaccia aces tryout 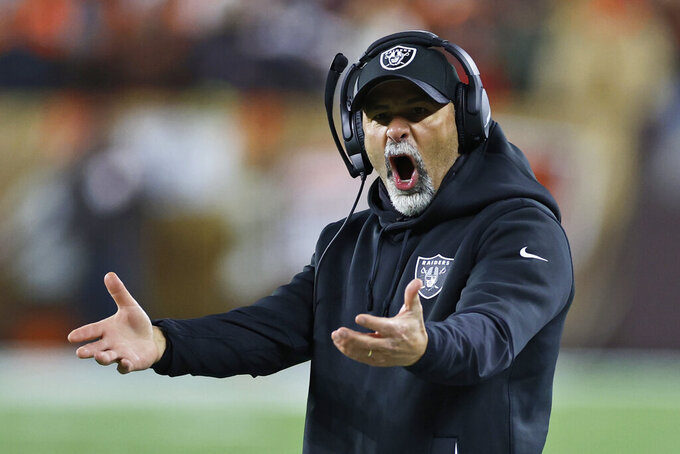 LAS VEGAS (AP) — The firing in Miami was a head scratcher, considering Brian Flores won eight of his last nine games and seemed to have the Dolphins moving firmly in the right direction. Not so much in Minnesota and Chicago, where both the coaches and general managers had long since worn out their welcome.

Black Monday offered up the usual number of casualties across the NFL, where missing the playoffs means a pink slip might not be far behind.

The season is over for 18 teams and there’s no reason to waste time cleaning house. No reason to dally around looking for a new coach, either, though diversity interviews — and hopefully some diversity hires — will slow the process some.

Except in Las Vegas, that is. There, all Raiders owner Mark Davis needs to do is one little thing — ignore shiny objects like Jim Harbaugh and drop the word interim from Rich Bisaccia’s title.

Do it regardless of what happens in Cincinnati this weekend as the Raiders try to win their first playoff game in 19 years. Do it because it’s the right thing to do for the players who believe in him the most.

Heck, do it because Sunday night’s thriller against the Chargers to end the NFL’s regular season answered any remaining questions about Bisaccia's coaching acumen.

The football lifer who had never led a team at any level has earned the right to be a head coach at football's highest level. After nearly two decades coaching special teams in the NFL, he’s an overnight success story no one saw coming.

Think about it. When Bisaccia was first handed the reins of the team after Jon Gruden was sent packing, he had trouble figuring out how to use the headset on the sidelines.

Now he’s got the Raiders in the playoffs — and they look like a team that's not ready to go away easily.

The blue collar coach who spent 38 years in college and pros waiting for his chance found it unexpectedly when Gruden was run out of town because of his disturbing emails. In just 12 games, the 61-year-old has crafted the team in his own image, going 7-5 despite ongoing turmoil that included wide receiver Henry Ruggs III killing a woman while racing his car through city streets.

Players say they love him, and his unassuming personality is one big reason why. While Gruden had to be the center of attention on any team, Bisaccia came to the job with the ego of a longtime assistant who thought his time at the top would never come.

His players play hard for him, the one intangible any coach needs in order to succeed.

Every game. Every down.

‘’I think we’ve tried to develop a group of men that care about each other, know what to do and compete with relentless effort,’’ Bisaccia said. ‘’And that’s a hard team to beat.’’

It was Sunday night in a primetime game that closed out the NFL regular season in style. The Raiders blew a 15-point fourth-quarter lead only to win on a last-second kick in overtime that had a full house at Allegiant Stadium screaming in glee.

They would have advanced on a tie, too, but that’s another story in itself. And there are plenty of stories to go around on a team that found a way to win its last four games to finish 10-7 and earn a spot against the Bengals in Cincinnati.

"Just to see how coach Bisaccia led us this year, our coaching staff staying together,’’ quarterback Derek Carr said. ‘’Hopefully it’d be a Disney movie someday, and I get to play coach Bisaccia.’’

Those kind of movies only get made if Super Bowls are won, and no one yet is touting the Raiders to be in Los Angeles in February. Just winning one playoff game would be a building block, even if the Raiders are 6-point underdogs against the Bengals.

Still, Bisaccia has done the job he was asked to do — and more. He’s been steady through a season of adversity, and he has his team playing hard and playing together just when they need it the most.

He’s treats his coordinators as co-equals, and they and the other assistants have bought in, too, just like the players. Along the way, he’s also figured out a few things about what it takes to be the head man himself.

He has, even if the tryout isn’t quite over. The Raiders still have games — or a game — to play.

Still, the argument can be made that Bisaccia has already aced the audition.