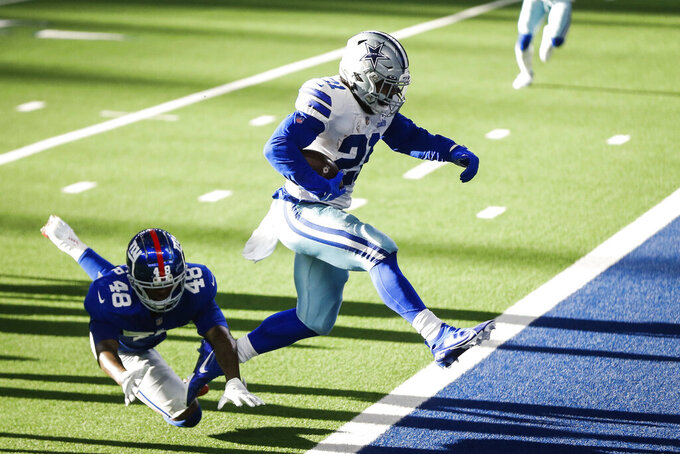 Cowboys Ezekiel Elliott leaps out of the way to a touchdown during the game against New York Giants Sunday, Oct. 11, 2020, in Arlington, Texas. (Yffy Yossifor/Star-Telegram via AP)

There are some usual suspects to round out the list this week, but there are also a few new names to focus in on. It’s been a wild ride the season, but we’ve still got you covered for the best bets to score in Week 6.

Already fifth in the league in touches per game (22.6), Elliott should get an even bigger bump in usage, now that Dak Prescott is out for the season. The 41.05 percent TD dependent Elliott has scored in all but one game this season, and he could reach the end zone this week against a Cardinals team that has allowed five TDs to running backs so far this season.

Gurley is coming off his best game of the season (121 yards, 1 TD), as Matt Ryan continues to struggle without Julio Jones. Dan Quinn's firing as head coach may encourage interim coach Raheem Morris to stick to what has been working, the running game, for Atlanta this week. Atlanta faces Minnesota, a team tied for fourth in most rushing TDs allowed (five).

Henry started off this season slowly with touchdowns, but he’s scored twice in each of his past two games. He’ll face a Texans team this week that has allowed the third-most rushing TDs to RBs this season. Leading the league at 29 touches per game, Henry should get goal-line action against the Texans.

Gaskin scored his first TD of the season last week in a game where Jordan Howard was a healthy scratch for the first time. Gaskin has worked his way into the lead running back role in Miami, and he faces a Jets team this week that is the fifth-best matchup against the run this season and has allowed the second-most rushing TDs (seven). Gaskin could get his second TD of the season in Week 6.

Robinson hasn’t scored in two games, but he’ll go up against a Detroit team this week that has allowed the most rushing yards per game this season (170.3). The Lions have also allowed six TDs to running backs so far this season, a top-10 distinction. With D.J. Chark's status uncertain, the Jags may lean on Robinson even more than usual.

The 47.43% TD dependent Thielen is tied for the league lead in receiving TDs with six. He’ll face an Atlanta team this week that just fired its head coach, in addition to already being the eighth-best matchup for opposing WRs this season. Expect the league leader in WR fantasy points per game to continue his TD streak in Week 6.

Claypool makes for an ideal red zone target at 6-foot-4, 238 pounds, and that size really came into play in Week 5 when he caught three TDs passes and ran for one against the Eagles. Diontae Johnson left that game with a back injury, and this was a primary reason Claypool saw as many snaps as he did. Johnson could be limited coming into Week 6. If Johnson can’t go this week, or is limited, Claypool may yet again have a big game — this time against a Browns team that has allowed the second-most receiving TDs in the league (eight).

Fuller has topped 50 yards receiving and scored in each of his past three games. The Texans' top receiving option will face a Titans team this week that has allowed the 10th-most fantasy points to WRs this season. With a 35.16 TD dependency, Fuller is primed to reach the end zone for the fourth straight week.

Surprisingly, Hopkins has only two TDs on the season, but that could change this week as the Cardinals go up against the Cowboys, the second-best WR matchup in the NFL. Dallas has given up the most TDs in the league to WRs (nine). Dallas' secondary could struggle to cover Hopkins, who will be in the Monday night spotlight.

D.J. Chark isn’t practicing on Wednesday, making it possible that he misses Sunday's game against Detroit, a team that has given up the fourth-most TDs to WRs this season. Cole has scored in three of five games this season and could be a primary red zone target for the Jaguars if Chark misses the game. With a 44.89 TD dependency, Cole could be a strong contender to score at least once in Week 6.