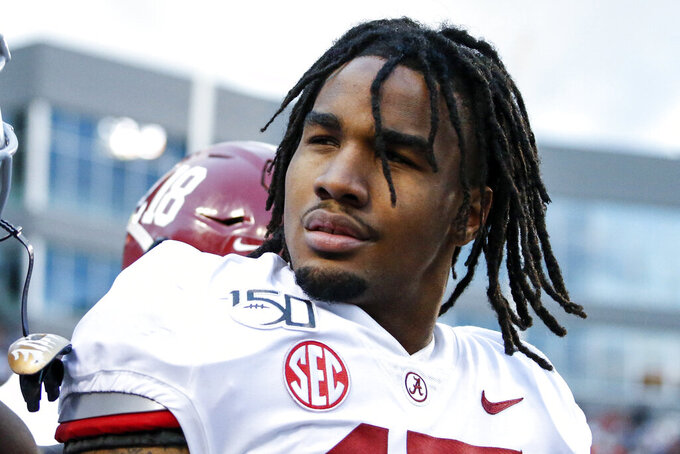 FILE - Alabama wide receiver Jaylen Waddle (17) celebrates with Xavier Williams (9) after scoring a touchdown against Auburn during the first half of an NCAA college football game in Auburn, Ala., in this Saturday, Nov. 30, 2019, file photo. Waddle is a possible first round pick in the NFL Draft, April 29-May 1, 2021, in Cleveland. (AP Photo/Butch Dill, File)

DAVIE, Fla. (AP) — Jaylen Waddle is headed to the Miami Dolphins to provide a dynamic target for his former Alabama teammate, Tua Tagovailoa.

The Dolphins selected Waddle with the sixth overall pick Thursday night, choosing him over another Alabama receiver, Heisman Trophy winner DeVonta Smith. It’s the highest Miami has ever taken a wideout.

“He has been a dynamic, explosive player, even from his freshman year,” Dolphins general manager Chris Grier said. “We love his athletic ability, his run after catch, his speed, his toughness. He plays with passion and energy. This guy is someone we had our eye on the last three years.”

The Dolphins used the 18th pick to take the University of Miami's Jaelan Phillips, the first edge rusher drafted.

A social media video showed Tagovailoa grinning when the selection of Waddle was announced.

The speedy, 5-foot-9, 180-pound Waddle played in only six games last season because of a broken left ankle, but returned to play in the national championship game, catching three passes despite a limp to help Alabama beat Ohio State.

“It shows the character and how important football is to him,” Grier said. “A lot of players would have opted not to play.”

Waddle averaged 44.5 yards on his 17 touchdown receptions in three seasons with the Crimson Tide, and scored three times on kick returns.

Elusive after the catch, Waddle may be used primarily as a slot receiver. He said he is often compared with three-time All-Pro Tyreek Hill of the Kansas City Chiefs.

“But I want to be my own player and do my own style, and not emulate someone else’s style,” Waddle said.

Smith was taken 10th by the Philadelphia Eagles. He and Waddle were both were in Cleveland, where the draft was held.

“It’s a special moment to share with your brother,” Waddle said, his voice breaking. “It makes the moment even more special, more emotional.”

Waddle's speed gave him an edge in choosing between the two, Grier said.

“It's the explosiveness that Waddle gives you, as well as the return game, that dynamic trait," Grier said.

Phillips' career was nearly derailed at UCLA by concussions, but he returned to football with the Hurricanes last year and had eight sacks and 15 1/2 tackles for a loss.

“When you watch him play, you would never question his passion,” Grier said. “He plays 100 mph and has a tremendous motor. We’re very excited to have him.”

The 6-6, 260-pound Southern California native said he was thrilled to be taken by the Dolphins.

“I just moved all my stuff out of Coral Gables back to L.A., and now I'm coming back to Miami,” Phillips said with a laugh. “L.A. made me, but Miami saved me. I owe a lot to this city. There is no place I'd rather be than the 305.”

Phillips said his history of concussions is nothing to worry about, and credited his comeback from the injuries to perseverance.

“I kept my faith, stayed humble and had great people around me,” he said.

Dolphins owner Stephen Ross pledged two years ago to build through the draft, and that remains the approach after the team doubled its 2019 win total to 10 last year. The Dolphins have two more picks in the second round Friday, which will give them four of the top 50.

Miami originally had the No. 3 overall pick, but Grier traded down to 12th and then back up to sixth.