Early mistakes by uneven Vikings too costly to overcome 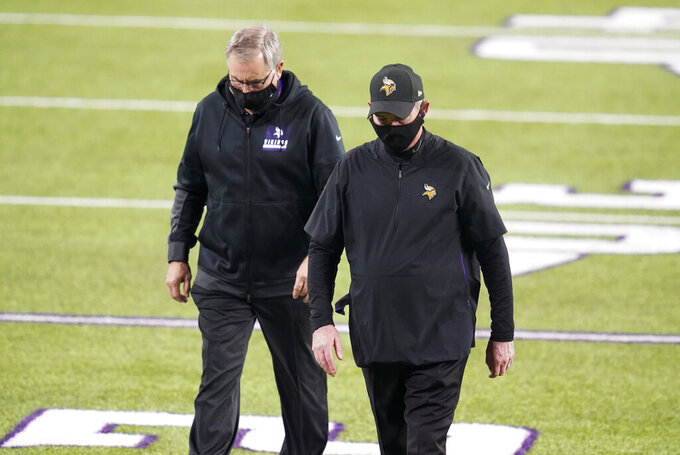 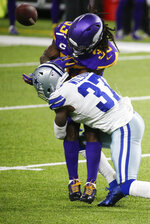 MINNEAPOLIS (AP) — The Minnesota Vikings stumbled through the first half, an uneven and undisciplined performance that was a little unlucky, too.

As well as they played against the Dallas Cowboys after that, those early mistakes made their margin for error too small to overcome.

The same might ultimately be said about their 2020 season. With their 31-28 defeat, the Vikings (4-6) squandered a prime opportunity to pull within one game of the final wild-card spot in the NFC.

Andy Dalton returned from a two-game absence to throw three touchdown passes, hitting Dalton Schultz for a 2-yard score with 1:37 left to lift the Cowboys to victory on Sunday and stop the Vikings' three-game winning streak.

“It was one of those games, and so many NFL games are like this, where one or two plays makes a difference,” quarterback Kirk Cousins said. “You know that going into the game, you feel that during the game, but we just didn’t come out on the right side of enough of those plays to win the game.”

The problems started on their first possession, when Donovan Wilson and DeMarcus Lawrence took down Cousins for a second-down sack.

Wilson, who delivered a helmet-to-helmet hit on Cousins that went unflagged, wrestled the ball away from Cousins as they fell to the turf. Cousins was initially ruled down by contact, but Dallas challenged and took possession at the Minnesota 30 after the replay reversal. The Cowboys were in the end zone three plays later.

Then in the second quarter, the beleaguered special teams appeared to produce a major breakthrough when Britton Colquitt’s 23-yard pass to Kris Boyd on a fourth-and-10 fake punt was wiped out by Boyd’s illegal shift penalty. When they lined up to kick again, Boyd was called for an illegal block above the waist, a rarity for the punting team.

Coach Mike Zimmer was not sympathetic to his second-year cornerback, who had replaced rookie Dan Chisena in one of the gunner spots on the coverage team.

“He didn’t get set for a second, and then he shoved a guy in the back,” Zimmer said. “You can’t do that.”

The Cowboys took over at their 48 and drove for a touchdown and a 13-7 lead. When the Vikings had the ball next, center Garrett Bradbury was called for holding, two plays preceding a punt. Then after Dallas had third-and-1 from the Minnesota 38 and Dalton threw consecutive incompletions for a turnover on downs, the Vikings reached the Dallas 27 on the ensuing drive before another jarring hit by Wilson popped the ball loose from Dalvin Cook during an over-the-middle catch. The Cowboys quickly moved in position for a field goal that proved to be the winning margin.

“The first half, it was all a blur. We couldn’t get on schedule to get going to where we wanted to go,” Cook said.

Cousins threw touchdown passes on each of Minnesota's first three possessions of the second half, finishing 22 of 30 for 314 yards and no interceptions. Adam Thielen caught two of the scores on eight receptions for 123 yards. Justin Jefferson had the other touchdown, a 39-yarder that gave the Vikings a 28-24 lead with 9:37 left. Cook had 160 yards from scrimmage and a first-quarter score.

In the end, all that production by their stars on offense was overshadowed by the late lapses on defense in perhaps a mirror of how this season has been unfolding.

The Vikings, who started 1-5, have home games against Carolina (4-7) and Jacksonville (1-9) that give them a viable chance at a .500 record for the final quarter of the schedule. But they're in ninth place in the crowded NFC, two games behind Arizona (6-4), with games at New Orleans and Tampa Bay looming in December.

“We definitely know what’s up. But at the same time we’re still trying to take it one game at a time," linebacker Eric Kendricks said. “We’ve got to win that game at hand.”