Falcons keep taking steps back, and the defense is to blame 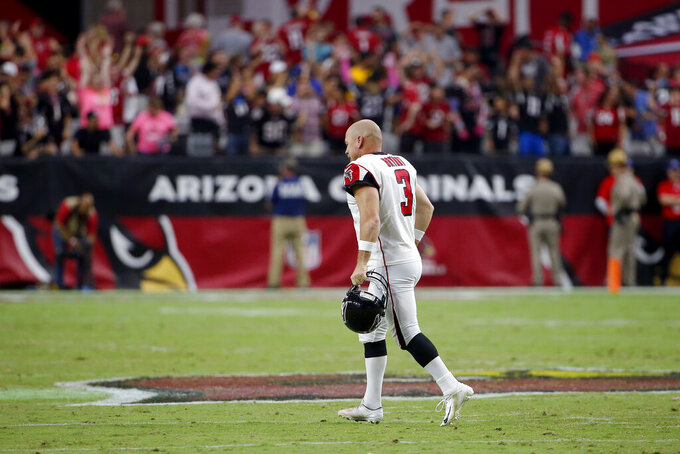 Atlanta Falcons kicker Matt Bryant (3) runs to his bench after missing a point after attempt against the Arizona Cardinals during the second half of an NFL football game, Sunday, Oct. 13, 2019, in Glendale, Ariz. The Cardinals won 34-33. (AP Photo/Rick Scuteri)

ATLANTA (AP) — The Atlanta Falcons are riding a four-game losing streak and have dropped 10 of 14 going back to Week 10 last season.

Can it get any worse? Most signs point to yes.

With each passing week, the Falcons are proving they lack the personnel to fix what's wrong on defense. Arizona rookie Kyler Murray showed why Arizona drafted him No. 1 overall in the Falcons' 34-33 loss Sunday, becoming the latest quarterback to shred Atlanta.

Coach Dan Quinn keeps harping on the same topics — effort is solid, execution is lacking — but he's running out of time as Atlanta (1-5) has plummeted toward the bottom of the NFC.

Led by 12th-year quarterback Matt Ryan, the offense is playing well enough to win some games, but it has little hope of scoring enough points to counter all the issues on the opposite side of the line. The Falcons rank last or near the bottom in nearly every important defensive category.

It wasn't supposed to be this bad after Quinn fired his coordinator last January and took charge of the defense himself. Atlanta re-signed stalwart nose tackle Grady Jarrett and playmaking linebacker Deion Jones to long-term contracts. It signed Allen Bailey and Adrian Clayborn in free agency and hoped that first-round draft pick Takk McKinley, a third-year end, and second-round pick Isaiah Oliver, a second-year cornerback, would step up.

"We went hard into our week out in Arizona with a big emphasis on our zones, and so to see a couple of errors take place in those, that was difficult," Quinn said Monday. "The ones that are the contested catch when they earn 'em, whether it be in a man-to-man or a zone, you definitely can live with those, but not the ones where they're self-inflicted."

Oliver was defending on the two longest gains.

Ryan hit on 30 of 34 targets and leads the league in completions and ranks second in yards passing. With the Falcons getting a solid day from play-caller Dirk Koetter on some clever misdirection routes, Ryan connected with eight nine receivers, the biggest chunks coming from Austin Hooper and Julio Jones, who each had eight catches for 100-plus yards.

If Quinn doesn't fix the defense, his job could be in serious jeopardy. The Falcons rank last in scoring and last in sacks and have registered zero in their past three games.

Running back Devonta Freeman had a good game Sunday. He had nearly 120 yards from scrimmage, caught two touchdown passes and averaged a season-best 4.6 yards rushing on 19 attempts. The Falcons need that kind of production from Freeman every week.

Vic Beasley, the NFL sacks leader during Atlanta's run to the Super Bowl in 2016, gave a picture-perfect example of the defensive struggles. With the game tied at 27-all in the fourth quarter, Beasley recorded his first whole sack of the season, but he was penalized twice on the play for holding and a horse-collar tackle. The Cardinals accepted the second flag and scored the decisive TD when Murray and running back Duke Johnson beat linebacker De'Vondre Campbell on a 14-yard catch three plays later.

Quinn said left cornerback Desmond Trufant is no danger of losing his job to Kendall Sheffield and added it's too early to tell if Trufant will be able to return from a toe injury for this week's game against the Los Angeles Rams. Left guard James Carpenter, right guard Jamon Brown and defensive end all left the game with injuries and all three returned.

56 percent, which the Falcons are allowing on third down. That's by far the worst in the NFL and marks the second straight year Atlanta has ranked last.

Quinn must keep trying to find ways to consistently pressure the quarterback and create takeaways. The Falcons had no quarterback hits and managed just one hit in the Week 5 blowout loss at Houston.