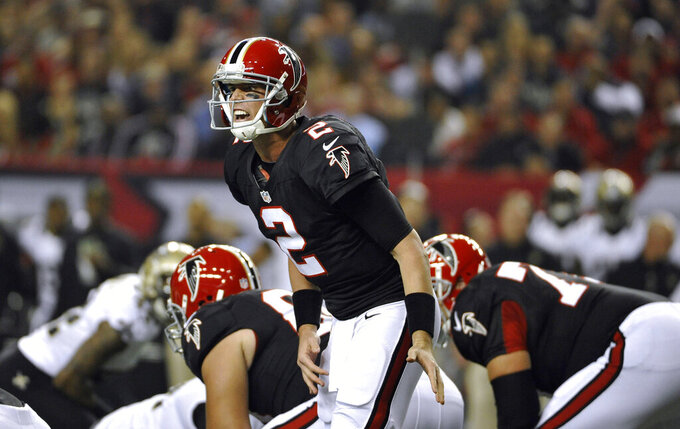 FILE - Atlanta quarterback Matt Ryan calls signals during the first half of the team's NFL football game against the New Orleans Saints on Nov. 29, 2012, in Atlanta. The Falcons are bringing back their red helmets for their throwback uniforms this season. The Falcons announced Wednesday, June 1, 2022, the team will bring back the red helmets with black jerseys for the first time since 2012. (AP Photo/Rich Addicks, File)

FLOWERY BRANCH, Ga. (AP) — The Atlanta Falcons are bringing back their red helmets for their throwback uniforms this season.

The Falcons announced on Wednesday night the team will bring back the red helmets with black jerseys for the first time since 2012.

The team will debut the throwback look, which pays tribute to their first uniform in 1966, when they play the San Francisco 49ers in a home game at Mercedes-Benz Stadium in Week 6 on Oct. 16.

The red helmet features a white and black stripe down the middle, with a black Falcons logo and a gray facemask. The stripe is trimmed in white and gold. The original color scheme was designed to include Georgia and Georgia Tech's colors in an attempt to appeal to college football fans.

The Falcons wore this version of the red helmet from 1966 to 1969 before removing the gold trim.

The Falcons brought back the combination in 2009 and wore the uniform twice each season until 2013, when NFL rules prohibited teams from wearing more than one helmet.

The league is allowing teams to use a second helmet in the 2022 season. The second helmet can be used with a throwback, color rush or alternate uniform.