Fields hopes offseason work leads to jump for him, Bears 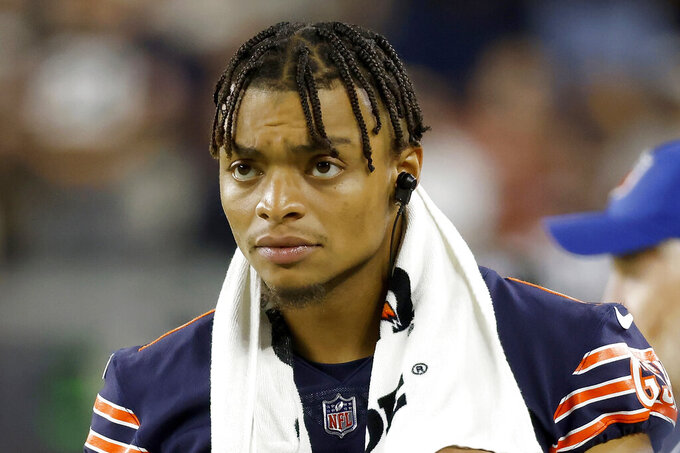 FILE - Chicago Bears quarterback Justin Fields (1) stands on the sideline during an NFL preseason football game against the Cleveland Browns, Saturday Aug. 27, 2022, in Cleveland. Fields comes into his second year hoping to convince a new general manager and coach he is the right quarterback for the Chicago Bears. (AP Photo/Kirk Irwin, File)

LAKE FOREST, Ill. (AP) — Justin Fields spent the offseason tweaking his footwork and mechanics and trying to improve his presence in the pocket.

He also embraced his leadership role as the Chicago Bears' unquestioned starting quarterback. Now, he's hoping the work he and his teammates put in leads to a big payoff for a team that struggled last year, starting with the season opener this week against San Francisco.

“Coach says all the time, it’s about us. It’s not about the 49ers this week,” Fields said Wednesday. “It’s about us — how we play, how we execute. So I’m just playing for my teammates, playing for my coaches and going out here and executing to the best of my ability.”

All eyes will be on Fields when the Bears host the 49ers on Sunday.

He comes into his second season trying to convince new general manager Ryan Poles and first-year coach Matt Eberflus he is the right person to solidify a position that has historically haunted the Monsters of the Midway.

A strong showing against a dominant defense that helped lead San Francisco to the NFC championship game last season would sure be a good way to start. The fact that the 49ers passed on him and drafted Trey Lance with the No. 3 overall pick in 2021 might make it that much sweeter.

“He’s gonna prove everything that everybody doubted him on — especially Week 1,” receiver Darnell Mooney said last week. “That team passed on him. So they’re gonna have to pay a little bit for that.”

Fields said he not out to prove the 49ers wrong and shrugged off Mooney's comment as “Moon being Moon.” The former Ohio State star was the fourth quarterback taken last year after Trevor Lawrence, Zach Wilson and Lance were drafted in the top three overall spots. The Bears traded up with the New York Giants to grab him at No. 11.

Fields said he's glad to be in Chicago and, therefore, "I’m glad that they passed on me.”

If he has a little extra motivation going against the 49ers, that's fine with Eberflus.

“Motivation is funny, isn’t it?” Eberflus said. “Sometimes different people are motivated a certain way, and I think if you have that under control, meaning self-control, and use that the right way to motivate you, I think there’s nothing wrong with that. That can be whatever. That can be anything.”

Fields is in a far different position than he was this time last year, when the previous regime opted to go with veteran Andy Dalton as the starter and have Fields watch and learn from the sideline.

That plan blew up when Dalton was injured in Week 2. Fields got thrust into the starting role after having no practice reps with the starters, and the Bears had to adjust on the fly.

It wasn't an easy transition. Fields threw more interceptions (10) than touchdown passes (seven) and had an unimpressive 73.2 passer rating. Chicago's offense ranked among the NFL's worst.

The Bears, with issues all over their roster, went 6-11 and missed the playoffs for the ninth time in 11 years. That convinced chairman George McCaskey to make big changes, so he fired former general manager Ryan Pace and coach Matt Nagy.

Poles, hired out of Kansas City's front office, overhauled the roster. But he didn't make any splashy additions to an offense that had a glaring lack of playmakers.

The Bears are banking on improvement from within, particularly from their quarterback. Fields said he's more comfortable overall, is clicking with new offensive coordinator Luke Getsy and is studying opponents differently.

“There’s a lot more confidence knowing it’s his show, he’s the guy we’re looking at," Quinn said. "And I say everyone else is embracing it around him, making sure they do their jobs, but helping him be successful as well. It’s a joint joint thing. Everyone’s gotta do their part.”