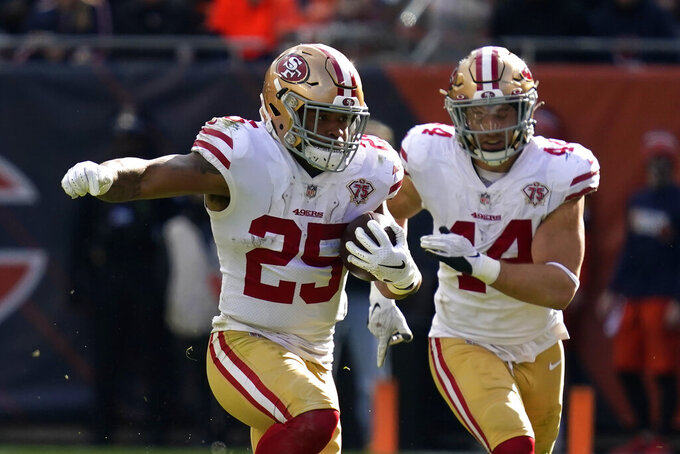 SANTA CLARA, Calif. (AP) — Jimmy Garoppolo and the San Francisco 49ers quieted all the talk about struggling offense and quarterback changes for at least another week.

Now the question going forward is was that an aberration or what the Niners can count on the rest of the season.

Garoppolo led the 49ers to one of their most complete offensive performances of the year, throwing for 322 yards, running for two touchdowns and leading seven straight scoring drives in a 33-22 win over the Chicago Bears on Sunday.

The victory snapped a four-game skid for San Francisco (3-4) that raised questions about when the team should make the switch from Garoppolo to rookie Trey Lance.

“I think our team just needed a win,” Garoppolo said. “Losing four in a row like that, you’ve got to do something about it. I think our guys did. We came ready today. There was a good mindset on the sideline. Guys were talking. You could feel each other. When we’re playing like that, that’s when we get dangerous.”

The Niners had almost everything clicking offensively Sunday after missing a field goal on the opening drive.

Sixth-round rookie Elijah Mitchell had his third 100-yard rushing game of the season with 137 on 18 carries, Deebo Samuel provided big plays in the passing game and the Niners had eight plays gain at least 20 yards for their most in a game since 2019.

Pass rush. With Dee Ford out with a concussion and Javon Kinlaw done for the year with a knee injury, the Niners still managed a good pass rush. Arik Armstead moved inside more on Sunday, allowing Samson Ebukam to get more snaps. He had one sack and a season-high five pressures, according to Pro Football Focus. Nick Bosa added a team-high six pressures and two sacks and Marcel Harris also had a sack.

Containing running quarterbacks. The Niners struggled to keep Justin Fields contained, allowing him to rush for 103 yards. One was a spectacular 22-yard TD on a play that Fields ran 59.6 yards on, the most for a QB on a TD run this season, according to NFL NextGen stats.

Samuel had his third game with at least 150 yards receiving this season, with six catches for 171 yards. His 83-yard catch and run on a third-and-19 screen changed the game and he also had a 50-yarder to set up a field goal late in the first half.

Joey Slye. The fill-in kicker missed an extra point for the second straight week, as well as a 48-yard field goal try. Slye's time in San Francisco could be done with Robbie Gould expected to come off IR after injuring his groin in pregame warmups on Oct. 3.

S Jimmie Ward (quadriceps) left the game and is likely to miss a week or two. San Francisco placed its other starting safety Jaquiski Tartt on IR last week with a knee injury. ... The Niners hope to get TE George Kittle (calf) back from IR this week and will also open the practice window for RB Jeff Wilson Jr. ... DE Dee Ford and LB Azeez Al-Shaair should return after missing one game with a concussion.

0 — The 49ers didn't punt the ball, turn it over or allow a sack on Sunday, becoming the ninth team to do that in the Super Bowl era. The last was Baltimore against Houston in 2019. The Niners also did it once before in their history, a 55-17 win against Detroit in 1993.

The 49ers host Arizona on Sunday in search of their first division win after losses to the Cardinals and Seahawks.

By Teresa M. Walker just now
By Josh Dubow 49 minutes ago
By The Associated Press an hour ago
an hour ago
By Graham Dunbar 2 hrs ago