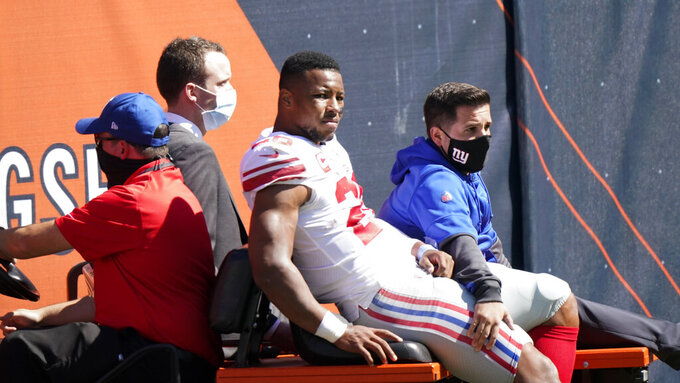 FILE - New York Giants running back Saquon Barkley (26) is carted to the locker room after being injured during the first half of an NFL football game against the Chicago Bears in Chicago, in this Sunday, Sept. 20, 2020, file photo. Coming off an ACL injury that cost him most of last season, Saquon Barkley either doesn’t know or isn’t saying how much he will be able to do when the New York Giants report to training camp next week. Speaking during a break at a youth football camp Monday, July 19, 2021, Barkley said he is continuing to rehabilitate his right knee and he is taking things day by day. (AP Photo/Nam Y. Huh, File)

EAST RUTHERFORD, N.J. (AP) — Running back Saquon Barkley, coming off an ACL injury, is starting training camp for the New York Giants on the active/physically unable to perform list.

Barkley and five other players were placed on the list Thursday as the team’s quarterbacks, first-year players and those rehabbing injuries checked into training camp. They joined a group of rookies who reported Wednesday.

Veterans are scheduled to report on Tuesday, practice starts the following day.

Barkley said on Monday at a youth football camp he was not sure whether the team would allow him to practice right away. He was injured in the second game of last season and had surgery in October.

Two players are on the Reserve/Non-Football Injury (NFI) list: linebacker Ryan Anderson (back) and running back Sandro Platzgummer (hamstring). The NFI list is very similar to the PUP list, except the player must have sustained his injury away from the team. Such players can return to practice when they are medically cleared.

In addition, running back Taquan Mizzell was placed on injured reserve with a hamstring injury. Mizzell, who last played in a regular-season game in 2018 for Chicago, was signed in January.