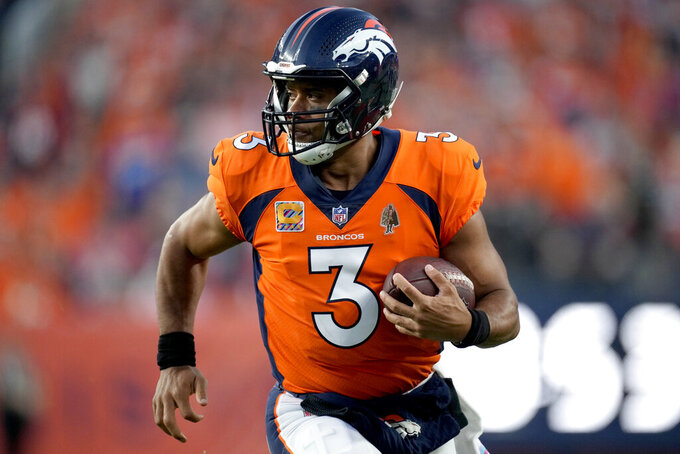 Denver Broncos quarterback Russell Wilson (3) scrambles against the Indianapolis Colts during the first half of an NFL football game, Thursday, Oct. 6, 2022, in Denver. (AP Photo/David Zalubowski)

LOS ANGELES (AP) — Justin Herbert has shown he has been able to bounce back from a serious injury.

Whether Russell Wilson can do the same has turned into the leading storyline for Monday night's game.

Herbert's Los Angeles Chargers will host Wilson and the Denver Broncos in prime time in an AFC West matchup. Even though there remains nearly three months of the regular season to be played, both quarterbacks have already experienced their share of adversity.

Wilson received an injection last Friday for a strained muscle near his throwing shoulder. The platelet-rich plasma injection was used to treat a strained latissimus dorsi on his right side. It is the large, flat muscle on the back that stretches to the sides and behind the arms. Wilson sustained the injury during an Oct. 2 loss at Las Vegas and then played through it on a short week when the Broncos lost 12-9 in overtime to Indianapolis.

For the second straight year and fourth time in his 11-year career, Wilson is on a team that is 2-3 after five games. His 82.8 passer rating is 12th in the AFC along with a completion rate of only 59.4%, hardly what the Broncos new ownership group expected when they gave Russell a $245 million contract extension.

Even though Wilson and the Broncos have struggled under first-year coach Nathaniel Hackett, Chargers boss Brandon Staley remains leery of what Wilson can do.

“He’s going through that transition right now, too, of going to a new team, but he’s still the same player, in terms of being dangerous every snap," Staley said. “He’s a guy that is as tough of a cover as you’re going to go against."

Herbert is second in the league with 1,478 passing yards while playing with fractured rib cartilage after taking a hard hit during the fourth quarter against Kansas City on Sept. 15.

Some of Herbert's best games in his first three seasons have come in prime time. In seven night starts, he has thrown for more than 300 yards four times and has 20 touchdowns against four interceptions.

“He’s definitely playing at an unbelievably high level. He’s gotten better every week since the injury,” Hackett said. “Just his ability to play in the pocket and be able to drop back is unbelievable.”

The Chargers (3-2) have won two straight for only the second time since last October.

This is already the fourth time the Broncos will be under the lights for national television.

The scrutiny started with Hackett's decision to try to win the opener at Seattle with a 64-yard field goal that was wide left. It ramped up last week against Indianapolis, when the Broncos went for a touchdown instead of a potential tying field goal.

The Broncos did beat San Francisco on Sunday night on Sept. 25 by the unorthodox score of 11-10.

“We’re always under the spotlight, from the standpoint of whether it’s a primetime game or not,” Hackett said. "Obviously, being in prime time this much this early has increased that even more, but that’s part of the game.

“I think that the harder part with the prime-time stuff has been our schedule of short weeks then long weeks. As a new staff and team we haven't set the rhythm of a regular week because of all kinds of different stuff.”

BATTLE OF THE BACKS

Austin Ekeler and Melvin Gordon were part of the same Chargers backfield for three seasons (2017-19). Since Gordon left in free agency in 2020, Ekeler has become one of the top yards from scrimmage producers as the Bolts' lead back while Gordon has struggled in Denver.

Ekeler had a career-high 173 yards on 16 carries last week at Cleveland and has scored five touchdowns, including two receiving, the past two weeks. Gordon has emerged again as the lead back with Javonte Williams lost for the year with a knee injury, but is averaging 3.6 yards per carry and has four fumbles.

Mike Williams has gone through extremes at home and on the road this season. The Chargers' receiver is sixth in the AFC with 392 receiving yards and tied for ninth with 28 receptions. He has three 100-yard games on the road, but has three receptions for 25 yards in the two games the Chargers have played at their Hollywood Park home.

“I don’t know. I can tell you that we’re not trying to get him the ball any less in front of our fans," said Staley about the disparity. "I think that we’ve been really purposeful of getting Mike touches, particularly early in the game. Hopefully, we can continue to do that.”

Chargers rookie offensive left tackle Jamaree Salyer gets another tough challenge this week with Broncos linebacker Bradley Chubb, who is tied for third in the AFC with 5 1/2 sacks.

Salyer played a near-flawless game in his first NFL start at Houston on Oct. 2, but allowed six pressures and three QB hurries going up against Cleveland’s Myles Garrett last week. Chubb has one sack in his against Herbert.