High-profile QBs on new teams had another rough week 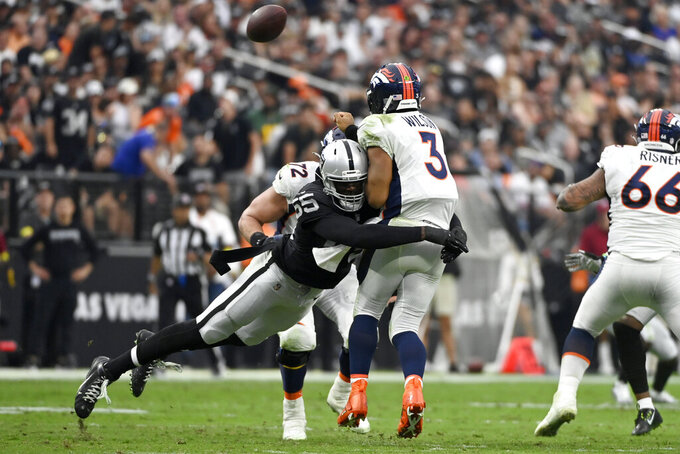 High-profile quarterbacks on new teams had a rough week.

Matt Ryan had another turnover-filled game for Indianapolis in a 24-17 home loss to Tennessee.

There’s a long way to go in the season, but the early results are dismal. The four QBs are 5-10-1 combined.

Only Wilson doesn’t have a losing record at 2-2. He also had the best day among the group, posting a 124.9 passer rating and leading the Broncos to a season-high in points.

The Broncos traded a slew of picks and gave Wilson a $245 million contract extension to turn them into a Super Bowl contender. For this season, they’ll be fortunate to compete for a wild-card spot in the loaded AFC.

Wilson is adjusting to a new team with a rookie coach who has made several questionable decisions already. No need to second-guess Nathaniel Hackett against the Raiders. Missed opportunities and a costly fumble hurt Denver.

“That third quarter, we kind of hurt ourselves,” Wilson said. “That’s the game, I think.”

The Colts jettisoned Wentz after he threw 27 touchdowns passes and only seven interceptions last season because they lost the final two games with a playoff berth on the line.

They brought in Ryan, giving coach Frank Reich his fifth starting QB in five seasons. Ryan, the 2016 NFL MVP, completed 73% of his passes for 356 yards against the Titans, but he fumbled twice, threw a pick and was sacked three times.

Ryan has nine fumbles and five interceptions in four games.

“I think you’ve just got to protect it better,” the 37-year-old Ryan said. “It’s a very uncharacteristic four-game stretch for me. It’s something I’ve got to clean up and get better at. If we can put together a clean game, I think we can be very good.”

The Colts believed Ryan was the upgrade they needed to get to them to the Super Bowl. They’ve got a shot in the mediocre AFC South but aren’t in the same league as the Chiefs and Bills.

The Commanders were happy to take Wentz from Indianapolis. They’ve been looking for a franchise QB for years and were hoping Wentz could reclaim the form he showed in Philadelphia his first four seasons.

But Wentz has been inconsistent. He opened the season with consecutive strong performances, throwing seven TD passes. But he has followed up with back-to-back poor games.

“Guys are hungry. Guys want to get better. I’m excited to see how we respond, how we get better, how we bounce back this week,” Wentz said.

Fighting hard won’t cut it. Wentz has to produce or the few Commanders fans who show up to games are going to start calling for backup Taylor Heinicke.

“I gotta be better. I gotta be more consistent,” Wentz said.

Expectations for Mayfield and the Panthers weren’t high. He joined Carolina in July only after Cleveland agreed to pay most of his salary, and he restructured his contract. Still, there was hope he’d prove he could be the long-term solution for the Panthers. Through four games, he has a career-low 75.0 passer rating.