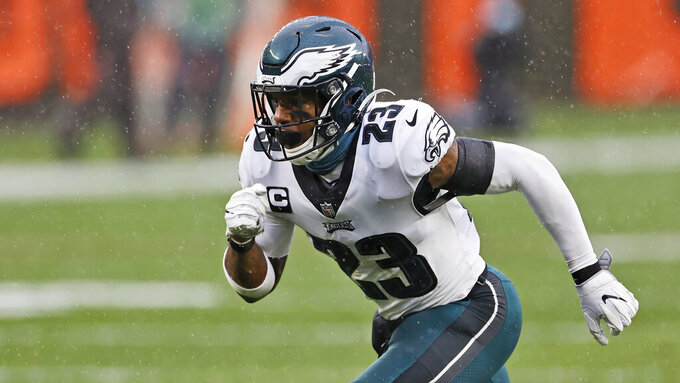 Philadelphia Eagles free safety Rodney McLeod runs a route during the first half of an NFL football game against the Cleveland Browns, Sunday, Nov. 22, 2020, in Cleveland. Shortly after an MRI confirmed McLeod had a torn knee ligament and needed season-ending surgery, the Eagles' safety went to a local supermarket, helped bag groceries and paid the bill for some lucky customers. McLeod and his wife, Erika, are giving back to the community this month with a "12 Days of Christmas" campaign through their Change Our Future Foundation. (AP Photo/Ron Schwane)

PHILADELPHIA (AP) — Shortly after an MRI confirmed Rodney McLeod had a torn knee ligament and needed season-ending surgery, the Philadelphia Eagles safety went to a local supermarket, helped bag groceries and paid the bill for some lucky customers.

McLeod and his wife, Erika, are giving back to the community this month with a “12 Days of Christmas” campaign through their Change Our Future Foundation.

He wouldn’t let the disappointment over his injury change his plans.

“Something like that was very eye opening for me and just really put things in perspective,” McLeod told The Associated Press. “I have an ACL tear and I get that news and everybody’s comforting me, sending me text messages, and you would think I would be in this dark place. But when I went to ShopRite and I saw what my wife and I were doing for a lot of those individuals, the emotion that they displayed because we were covering $100 worth of their bill or giving them $40, and to think that I thought I had it worse, it’s one of those things where we have to be grateful for everything, regardless of what’s going on in that moment.”

“We understand in this world there are a lot of issues,” McLeod said. “The world is a better place as long as everyone kind of does their part.”

McLeod got hurt in Philadelphia’s win over New Orleans on Dec. 13. It’s the second time in three seasons since he helped the Eagles win the Super Bowl that he has torn an ACL. The 30-year-old has one year remaining on his contract at $5.2 million, so he is facing an uncertain future.

“You understand how this business operates,” McLeod said. “I pride myself on being available and also productive. I love Philly, man. I love this organization and love this team. And I’m hoping that once I bounce back, I’m still on the roster and I get back to picking up where I left off pretty much.”

The Eagles missed McLeod in a 33-26 loss to Arizona on Sunday. They were also missing starting cornerbacks Darius Slay and Avonte Maddox, and the Cardinals racked up 526 yards and Kyler Murray threw for a career-high 406.

“He’s proved that he can come back from an injury like this,” Eagles defensive coordinator Jim Schwartz said of McLeod. “It’s such a gut punch when a respected player like Rodney — and who is a very productive leader for us, has had a really outstanding year — when you lose him for the game, but you also find out that you lose him for the season, everybody feels that.”

Earlier this month, McLeod was named one of the 32 finalists for the Walter Payton Man of the Year award. Named after the late Hall of Fame running back, the award recognizes an NFL player for outstanding community service off the field, as well as excellence on the field.

McLeod’s foundation was designed to empower people through education, advocacy and awareness in the areas of youth development, healthy lifestyles and community enrichment. Among its many initiatives, the foundation distributes 40,000 pounds of fresh food to families each month through Philadelphia’s Share Food Program.

McLeod has been committed to social activism and was a leading voice in establishing the Eagles' social justice leadership council. He developed a voting initiative to support and encourage civic engagement and voting in the city last month.

“When you think about legacy, majority of the time, you think of your impact on the field and how you’re going to be viewed,” McLeod said. “But I think a lot of us, particularly the guys who have won and our nominees this year, will tell you that the work that you do off the field for the people and how you impact this world will go a lot further. And that’s what I’m most proud of. I’ve always considered myself as more than an athlete. And it’s one thing to say, but it’s another thing to actually live it.”